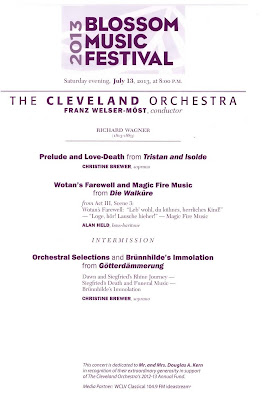 AMC attended a concert at the Blossom Music Festival, the summer home of the Cleveland Orchestra.  It was a program of concert performances from Wagner's Valkyrie.  This is AMC's virgin experience with Cleveland and it left little doubt that this is one spectacular operation and organization.

The Blossom Festival begins on July 3 and stretches untty is well-maintained; the performing venue sits in a natural amphitheater shaped meadow outside of Cuyahoga Falls, OH.  The festival calendar stretches from July 3 to September 1. Unlike the Mann Center in Philadelphia, the Blossom program is mostly classical and will also include a performance of Stravinsky's "The Rite of Spring" by the Joffrey Ballet.  And, in case you have forgotten, or didn't really want to remember, Cuyahoga Falls is home to the televangelist Ernest Angley.

The entire operation of the Blossom Center screams "professional"- from the well-maintained landscaping to the availability of eating facilities (including wine bar) to the availability of comfort facilities.  The Blossom music pavilion is dramatic and quite pleasant to sit in.  There are several beautiful gardens available that provide seating away from the crowds.  There is also a gift shop and an art gallery.

The program for the Festival is impressive.  There is a 70-page booklet about the Festival in general, and there was a 20-page program guide for the evening's performance. The program-specific guide had some of the most informative and well-written program notes that AMC has seen recently.

The All-Wagner program was wonderful.  AMC is never quite sure why there aren't more concert performances of Wagner but this one was entirely successful.  AMC was fortunate to have a seat close enough to the stage that the music did not have to be heard through a sound system.

The program opened with the Prelude and Love-Death from "Tristan and Isolde," with Christine Brewer as the soprano soloist.  This music is so passionate, sensual, yearning, and loving.  From the program notes: "Over his lifeless body, she (Isolde) gathers herself for the long scene that ends with the Leibestod ("Love_
Death"), the hymn in praise of a love so strong that it can only end in death."  (Click here for a version of this music: http://www.youtube.com/watch?v=j8enypX74hU0.  AMC has enjoyed Christine Brewer in a concert setting before ,but never has AMC appreciated the power and beauty of her voice until she  wrapped her vocal chords around this. AMC had a bad case of the chills, even in the 90-degree heat. AMC is something of a romantic so please enjoy the libretto from this magnificent piece: 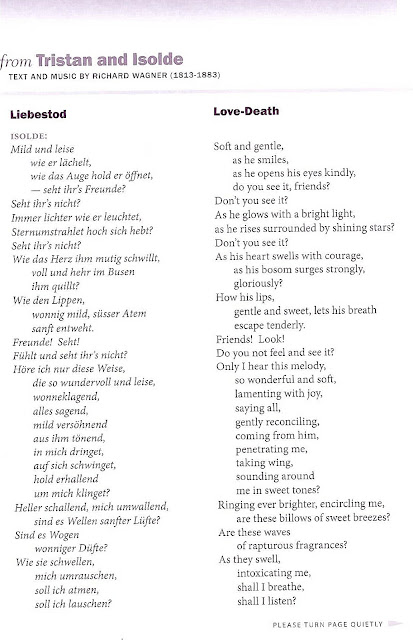 The second piece featured bass-baritone Alan Held, who soloed in Wotan's Farewell and Magic Fire Music from "Die Walkure."  Held is as powerful and Brewer and he is mesmerizing to watch.  He inhabited the role and seemed to have transcended Cuyahoga Falls to the Rheinland.

The final selection again featured Brewer in selections from "Gotterdammerung."  This music is breathtaking (for any fans of the movie "Excalibur," this piece is used to great effect throughout).  If Ms. Brewer was excellent in the Leibestod, she was simply superhuman in this performance.  For an extended version of this piece click here to see a performance from the Bayreuth Festival (Wagner's own theater): http://www.youtube.com/watch?v=R3SGtJNm-pI

The performance by the Cleveland Orchestra was astounding.  AMC never flinched from a bad horn note, intonation problems, or shaky ensemble.  This is the smooth playing that separates the truly great orchestras from the less lights.  Even in the problematic acoustical environment the violins were silky and golden.   AMC hasn't heard such consistently beautiful strings in many years.

As noted, Ms. Brewer and Mr. Held were wonderful.  Both seemed to be in their own worlds during their performances and we in the audience were fortunate to be invited in.

Conductor Franz Welser-Most has an impressive resume (click here for a very thorough article about Welser-Most: http://www.cleveland.com/arts/index.ssf/2008/09/cleveland_orchestras_welsermos.html).  Welser-Most as obviously in control of the orchestra, but it is so good that they probably could play blindfolded.  O.K.- that's a slight exaggeration.  But its in the right direction.  Welser-Most is a fairly undemonstrative conductor who is more likely to provide a beat rather than explicit direction.  AMC noticed W-M give dynamic instructions to the orchestral sections rarely.  He gave, however, very sympathetic support to the soloists, probably arising from his operatic background.

One final point.  It was really hot and humid, but W-M did not seem to break a sweat.  Nor did he break a smile- must be that Teutonic strength and reserve.

This was an unforgettable concert and AMC hopes to do the Blossom again in the near future.
at 10:54 AM