AMC recently completed the second annual tour of Northeast summer music festivals.  After a thirteen-hour drive returning to Atlanta, it feels like it might be the last but what seems a certainty today may be a faded memory in a year. 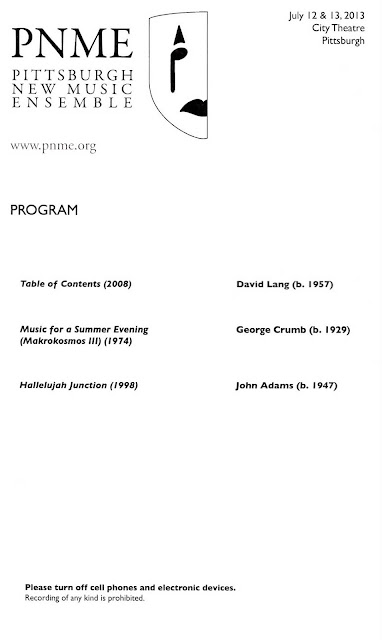 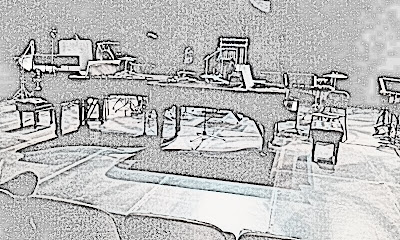 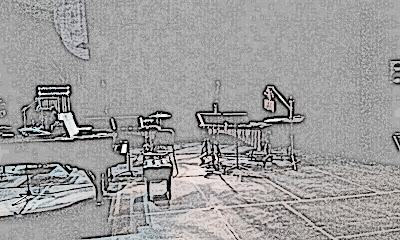 The first concert AMC attended featured the Pittsburgh New Music Ensemble (PNME).   As a point of departure, it is important to know that AMC has a decided bias in favor of new music, not so much because all of it is great (like music from many styles and eras), but because it dares to explore sound and its affect on people.  That is, even after all of these years of the world making sounds, there is still much to be learned, experienced, and felt, especially as those sounds interact with the human ear, brain, and perception.   AMC despairs upon hearing concert attendees saying something akin to "... they should remove modern music from the program" so presumably their sonic world will not be disturbed.  As is so many endeavors, some people do not what to be challenged to grow in response to encounters with the new.  One of AMC's favorite musical ensembles is Atlanta's Sonic Generator.  They perform cutting-edge music that both challenges and satisfies.  The PNME is similar and adds a bit more to the mix.  Like Sonic Generator, PNME has talented first-rate musicians.  The two groups are similar in providing access to new and unfamiliar repertory.  But PNME has one distinct advantage- its performing venue, the City Theater on Pittsburgh's South Side.  There are several reasons that AMC thinks its an advantage.  First, the PNME can adjust the visual stage to complement  its sonic stage, through the use of lighting, staging, and visuals.  The second is the South Side itself.  It is a former working-class neighborhood that has transformed itself into the weekend place-to-be.  Its sort of run-down vibe is what seems to make it so hip.  Going into a former steel- worker oriented bar seems to have its own latter day cache.  In fact the City theater has a similar vibe- its a re-purposed church building in a working class area that has cobblestone streets, and housing stock ranging  from the skillfully restored Victorian to the insul-brick covered 1950's remodel job.  This diversity makes Pittsburgh's South Side an electric place to be.

The PNME program was designed to mimic, dusk, night, and daybreak, according to artistic director Kevin Noe.  Lang's "Table of Contents" features several small percussion instruments placed on a table (get it?  Table of Contents).  Some groups chose to play the piece using hanging instruments, but the PMNE's Sean Connors and Ian David Rosenbaum played using a table mounted in the center of the audience.  This was pretty novel and drew the audience's attention, until about half way through when the novelty apparently wore off.  But AMC thinks it was more than the novelty wearing off.  It was partially a function of the music itself.  The first half uses a small bell that seems to be a "base note" that the music always seemed to return to.  After that, the music seemed more random, lacking a center point.  This mattered to AMC, who found the second half a bit boring and repetitive- not in a minimalist hypnotic or droning sort of way- but in random sounds-without-identifiable-anchors sort of way.  Connors and Rosenbaum were virtuosic and really seemed to enjoy playing the piece.  Click here to see a performance of this piece by another group: http://www.youtube.com/watch?v=ZPZTRAMJmQs

Crumbs "Music for a Summer Evening (Makrokosmos III)" manages to find every way possible for pianos to be played, including plucking, striking, and echoing.  But even more, the pieces afford ample opportunities for unusual uses for the human voice,marimba, siren, and various pieces of metal.  According to Wikipedia:

A collection of five pieces completed in 1974 and titled Music for a Summer Evening forms the third volume of Makrokosmos.... the work is scored for two amplified pianos and percussion (two players)... The contents are as follows:

This is strange and beautiful music that if played outdoors in the middle of the night with a moonless sky could raise a few goosebumps.  The piece also seems to play homage to Bartok's "Music for Strings, percussion and Celesta," especially the Night Music third movement.  The players (Connors and Rosenbaum and pianists Conor Hanick and Daniel Spiegel) were superb.  AMC never heard an audience that was so cough-less and quiet as that for this performance.  they and AMC were enthralled. Click here for a performance of this music: http://www.youtube.com/watch?v=w4WiE03SHlg

The final piece was John Adams "Hallelujah Junction." According to Wikipedia:

The name comes from a small truck stop on US 395 which meets Alternate US 40, (now State Route 70) near the California–Nevada border. Adams said of the piece, "Here we have a case of a great title looking for a piece. So now the piece finally exists: the 'junction' being the interlocking style of two-piano writing which features short, highly rhythmicized motives bouncing back and forth between the two pianos in tightly phased sequences". The work centers around delayed repetition between the two pianos, creating an effect of echoing sonorities. There is a constant shift of pulse and meter, but the main rhythms are based on the rhythms of the word "Hal–le–LU–jah"
AMC is a total fan of minimalist music.  In fact the best concert AMC attended this past year was the Lebeque Sisters "House of Minimalism" program perfromed at Paris' La Cite de las Musique. The sisters demonstrated the influence of this style of compositon from its earliest incarnations to its most recent, as in the work of Radiohead and SonicYouth.   Adams has musical roots in minimalism and he builds on a minimalist base, but often moves beyond it  So too with Hallelujah, where even though there are repetitive themes, they don't have the droning quality that is found in the works of some of his colleagues.  Regardless this is a powerful piece that ends up in a whirlwind of forte piano themes that left AMC breathless.  The soloists were Hanick and Spiegel.  They are quite a talented pair.  Click here for a performance of this music: http://www.youtube.com/watch?v=B9fgeGArk4I.  For a listen to some of Spiegle's piano performances, go here: http://vimeo.com/channels/97354.  To experience Hanick playing a luminous version of Glass, go here: http://www.youtube.com/watch?v=FL2cmTNopRk.

As already noted, this was the most attentive audience I think I have ever seen in the US.  The patrons included a mix of the hip, the thirty-somethings, and latter-day hippies.  The capacity of the theater is about 300 and it was about 2/3 full.  The PNME puts on a summer festival of wonderful new music and it does so with great skill and virtuosity.  This is a "must see" summer event. 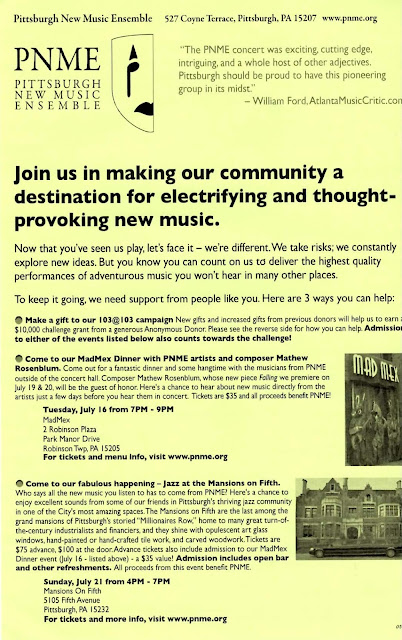