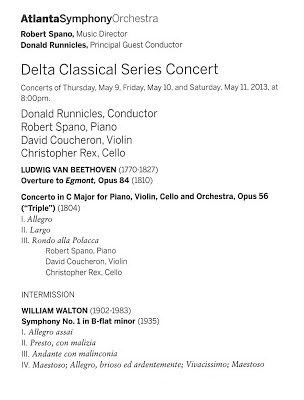 It was nice to see Maestro Runnicles return to the podium of the Atlanta Symphony Orchestra.  He is a very busy person who brings an international heft to the ASO. In fact, he is leading the Philadelphia orchestra on it summer residence in China (see: http://www.donaldrunnicles.org/donald-runnicles-leads-philadelphia-orchestra-on-historic-tour-to-china/.  AMC believes that Runnicles will be leading only two concerts this season in Atlanta, giving a maybe a glimpse of management's cost cutting efforts.  A copy of the program notes can be found at: http://www.atlantasymphony.org/ConcertsAndTickets/Calendar/2012-2013/Beethoven-Walton.aspx.

The concert began with Beethoven's Egmont Overture.  This was followed by the very beautiful Triple Concerto, also by Beethoven.  The soloists were Music Director Robert Spano on piano, Concertmaster Coucheron  on violin, and Principal Cellist Christopher Rex.  The choice of these three soloists may also be part of the belt tightening at the symphony, presumably because they are less expensive that bringing three other soloists   This was quite a nice performance.  Runnicles opted for a seating arrangement where the ASO cellos were located in front of him, with the violas to his right.  AMC liked this arrangement since the cellos are often lost in the orchestral sound.  Because of the need to have three soloists  the front of the stage was fairly crowded.  Spano could barely be seen, but Coucheron and Rex were front and to the left of Runnicles.  AMC has great admiration for Coucheron's playing but has been tepid about his grand tone overwhelming other musicians, especially in chamber works.  This is a problem when he plays with a cellist who has a rather restricted dynamic range.  In this performance, Coucheron seemed to hold back but the cello still did not rise to the occasion.  As a result, the piano tended to dominate the performance.  AMC also notes that when musician's play on the portion of the stage that covers the pit area, the sound is lost because their is no acoustic shell overhead helping to project the sound.    But this lack of  projection could not cover up the many intonation problems in the cello.

AMC thinks that there are many sections of the Triple concerto that presage the beautiful melodies of Schubert, or maybe Schubert simply learned a less from Beethoven.

The final piece was the Walton Symphony No. 1, that, like other British music from the early twentieth century is full of "Jolly good" and "What ho."  The first, second, and forth movements are full of bombast and brass.  The third movement is more reflective and quiet.  AMC likes this music- it is late Romantic, yet more aggressive than say, Rachmaninoff or Sibelius.  The ASO played beautifully, with their now-signature golden string tone, outstanding woodwind playing, and brilliant brass.   Runnicles knows how to have the brass be out front sonically, yet at the same time have them respect the need to not overpower the rest of the orchestra.

Finally, the ASO program booklet has been full of errors this season, and the same was true for this series of concerts.    Why?

Thanks to all the musicians, benefactors, patrons, and volunteers that made this concert possible.