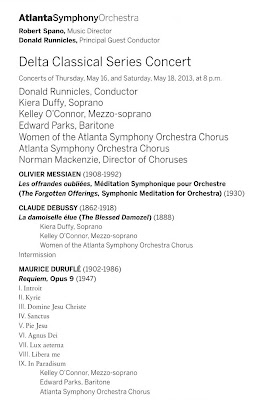 The Atlanta Symphony Orchestra, under Principal Guest Conductor Donald Runnicles presented a concert with a decided French twist, if you will pardon the pun. The guest soloists were Kelley O'Connor, mezzo-soprano; Kiera Duffy, soprano, and Edward Parks, baritone. The ASO Chorus was also part of the performance.

Messiaen's piece, The Forgotten Offerings, was his first orchestral work and was written in 1930.  It has three sections titled "The Cross," "The Sin," and "The Eurcharist." The middle movement is the most exciting befitting its name.  It is full of orchestral color and bombast.  The other two movements are more melodic and laid back.  Its an impressive piece of music that sounds fairly modern but also sounds like its from nearly a century ago.  The ASO performed beautifully and, at the end, Runnicles leaves his arms raised as if reveling in the mysterious religiosity of the work.  The audience responded by remaining silent until her lowered his arms. Click here for an excerpt: http://www.youtube.com/watch?v=a_o639mG95Q

Debussy's "The Blessed Damozel"  is over-the-top romanticism  written in the composer's signature impressionist style.  The music requires tremendous transparency from the orchestra, which the ASO musicians delivered.  Ms. Duffy and Ms. O'Connor were the soloists.  Both singers were very strong and Ms. Duffy sang without score, which was impressive.  In general, AMC has not been impressed with the ASO chorus, which, in Atlanta is held in very high regard.  Its really not the chorus itself, but rather the interaction of 100 voices with the hard acoustic in Symphony Hall and the seeming inability of conductors to restrain the chorus. In this performance only the Women of the ASO Chorus performed, and they did so eloquently and sensitively  They also had a transparent delivery that was spot-on for the music.   During the performance  AMC's mind visualized all of the people who must have swooned over this piece, given the poem that is its libretto.  It was written by Dante Gabriel Rossetti, and it is both romantic and also a bit unearthly, which is probably appropriate since it is being spoken by someone in heaven yearning for a love one that is still on earth. AMC must admit to a certain concreteness in writing (and maybe thinking) style that has grown over decades of producing reams of technical writing, so reading this poem that is so colorfully and artfully romantic is something of a treat.  Here is the text (from Wikipedia):

The blessed damozel leaned out
From the gold bar of Heaven;
Her eyes were deeper than the depth
Of waters stilled at even;
She had three lilies in her hand,
And the stars in her hair were seven.
Her robe, ungirt from clasp to hem,
No wrought flowers did adorn,
But a white rose of Mary's gift,
For service meetly worn;
Her hair that lay along her back
Was yellow like ripe corn.
Her O'Connor and Mr. Parks were seemed she scarce had been a day
One of God's choristers;
The wonder was not yet quite gone
From that still look of hers;
Albeit, to them she left, her day
Had counted as ten years.
(To one, it is ten years of years.
. . . Yet now, and in this place,
Surely she leaned o'er me—her hair
Fell all about my face. . . .
Nothing: the autumn fall of leaves.
The whole year sets apace.

AMC is all goose-pimply! Go here for an excerpt: http://www.youtube.com/watch?v=ZcVMmOZ3Q6Q

The concert concluded with Durufle's magnificent Requiem.  AMC is not particularly fond of the requiem genre, in part because they tend to focus on an angry god  who must be placated to keep the dearly departed from burning eternally in hell.  AMC would rather focus on the work that the living must do to live peacefully in the face of great loss.  This is also why AMC so likes Brahms' "Ein Deutches Requiem"- it is written for the living.  Runnicles and the massed ASO focus performed the work beautifully.  Intonation was nearly perfect and the strengths of the various sections of the orchestra really came through.  The silken strings, the golden winds, and the sharp brass were all there and humming along- so to speak.  In some sections of the work, the ASO Chorus again overwhelmed, in spite of Runnicles efforts to tame it a bit. AMC believes that cutting the chorus by one-quarter would be a good start toward a more balances sound, but that's not going to happen.  But, notwithstanding AMC's concern about the overwhelming nature of the chorus, AMC found the Sanctus to be hair raising.  It was searing and grandly loud.  For once AMC found the power of the chorus thrilling.  The soloists Ms.  O'Connor and Mr. Parks were perfect complements to the music and to the ASO.  Runnicles again held everyone in suspension after the last note, as if he needed time to return to reality.  It was effective.  Go here for an excerpt: http://www.youtube.com/watch?v=5TkXR4ns90o

It is so good to have Mr. Runnicles back on the podium.  He has been missed.

AMC noted much coughing in the hall.  There was an article on NPR this past week abut how the rate of coughing in a classical concert is nearly twice that of other venues.  Maybe a case of mass contagion.

Finally, Runnicles' choice of putting the cellos facing the audience should be continued.  AMC could finally hear them.

This conert was dedicated to the memory of L. Neil Williams, Jr. an ASO benefactor and friend of Mr. Runnicles.

Thanks to all of the musicians, benefactors, patrons, and volunteers that made this concert possible.