What if they gave a concert with nothing wrong? 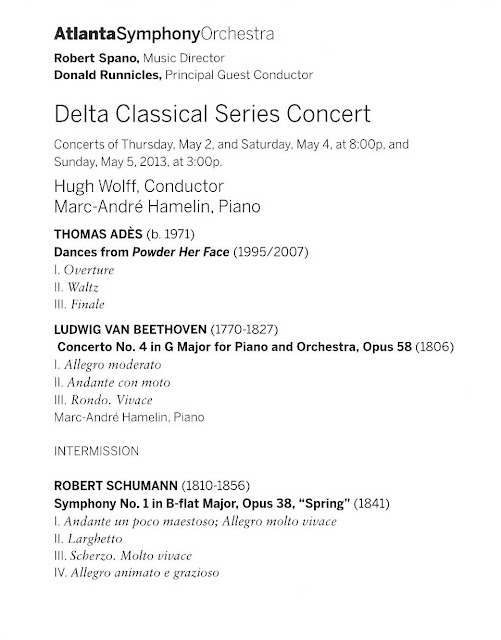 What's a critic to do?

AMC was not a fan of Thomas Ades violin concerto that was performed last season although he is looked upon with great favor in Europe. His dances from "Powder Her Face" is at first a bit off putting with great musical slides in the trombones and some flashy percussion. AMC must admit that insight into the music can be had by reading about the chamber opera on which it is based.  Here is a short synopsis from Wikipedia:

Adès's 1995 chamber opera with a libretto by Philip Hensher, won both good reviews and notoriety for its musical depiction of fellatio. The opera was commissioned by Almeida Opera, and has since been given new productions by chamber opera groups around the world. The Duchess depicted in the opera is the notorious Margaret Campbell, Duchess of Argyll whose scandalous behaviour in Britain in the early 1960s was revealed during her divorce trial with the introduction into evidence of photographs of her various sexual acts.
Ades captures the debauchery and also the pain that can often arise when things oh-so-private become oh-so-public. The ASO performed strongly in this challenging work.  As is usual many patrons did not like the music, at least based on their hallway conversations.  But Atlanta audiences don't like that was written after about 1875.  Too bad.

Regarding the rest of the program, AMC is at a loss for words.  It was a stunning effort by the ASO musicians, and Messers Wolff and Barnatan.  The Beethoven third piano concerto was spot on in every way.  Maestro Wolff knows how to ensure that the orchestra provides a convincing partnership with the soloist.  Mr. Barnatan was spectacular.  Not only is he technically topflight, he is also a great interpreter.

Wolff focused on introductions and dynamics.  He encouraged the violas to play like I have never heard them, especially in the Beethoven.  Even the often reticent cellos sounded strong.  The horns were on target. The violins had a golden sound that demonstrated how strong they have become.  The wood winds were again flawless.  Mr. Wolff understands how not to let the brass get out of control so the "Rhenish" symphony of Schumann did not have to suffer with overbearing trumpets and trombones.

AMC was very pleased with this concert.  Mr. Wolff should be on some orchestra's short list if they are looking for a skilled conductor.

Thanks to musicians, benefactors, patrons, and volunteers that made this concert possible.
at 12:10 PM