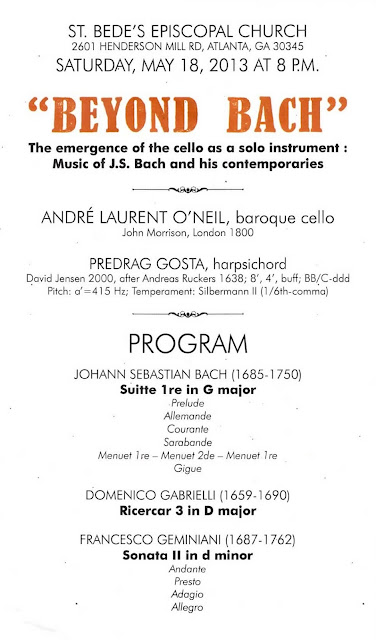 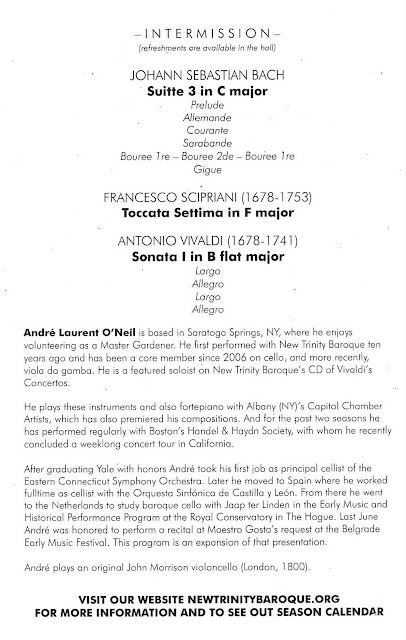 Given the long list of talented organizations, can anyone be designated as "the best."  AMC would suggest that is a fool's errand, even in spite of the proliferation of lists about almost everything these days.  But for AMC, it is difficult to beat The New Trinity Baroque and Sonic Generator, the former focusing on music very old and the latter very new.

Last evening,The New Trinity Baroque (click here: http://www.youtube.com/user/newtrinitybaroque) presented a concert that featured only Music director Predrag Gosta on harpsichord and Andre Laurent O'Neil on the baroque cello.  The program  titled "Beyond Bach" featured two of Bach's solo cello suites, each of which contain sections that most people might recognize, even if they don't know from where, i.e.,  the Prelude from Suite No. 1 and the Bouree from Suite 3.  Go here to sample these two works featuring Mr. O'Neil: http://earlymusicfestival.instantencore.com/web/music_details.aspx?ItemId=971988.  The concert also included works by Gabrielli, Geminiani, Scipriani, and Vivaldi. Mr. O'Neil played the entire program from memory. This alone was a Herculean feat.  But he also played beautifully, with hardly a misstep.  Maestro Gosta played accompaniment in the Geminiani and the Vivaldi.  He too played flawlessly.

Before the concert, Messrs. Gosta and O'Neill talked a bit about the history of the baroque cello and the harpsichord.  They also talked about the social context in which Bach was composing.  Because the community he lived in was dominated by Calvinists, organs were not permitted in the churches.  The irony is that Bach was primarily an organist.  To avoid the Calvinist strictures, Bach composed his cello suites. To AMC this is an interesting example of the juxtaposition of art and culture.

The concert was held at St. Bede's Episcopal Church, a change of venue for the NTB.  Its sanctuary is full of hard surfaces (terrazzo floors and brick walls) so it had much reverberation. This provided a sympathetic acoustical environment for the cello and harpsichord.

Finally, in addition to the musical skill of Maestro Gosta, he is a talented teacher who is  knowledgeable about his field.  He is also a great schmoozer who is approachable and affable.  If only more of our classical music leaders could be as personable maybe the whole concert experience would seem less stuffy and forbidding.

This was a grand concert by one of Atlanta's most intriguing and talented ensembles. AMC always looks forward to the NTB concerts and is never disappointed by their quality and programming.

To donate to the NTB, go here: http://www.newtrinitybaroque.org/

Thanks to all of the musicians, benefactors, patrons and volunteers that made this concert possible.