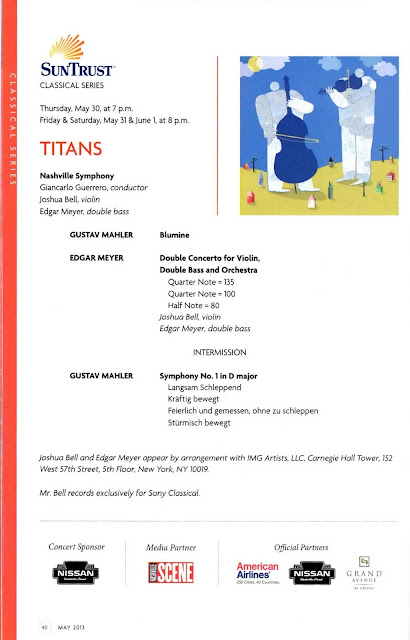 AMC attended a recent Nashville Symphony Orchestra (NSO) at its relatively new home at the Schermerhorn Symphony Center.  The program, under the direction of Giancarlo Guerrero included two Mahler pieces, and a relatively new work by Edgar Meyer that featured the composer on the double bass and Joshua Bell on the violin.

Let me begin with the Schermorhorn Center (http://en.wikipedia.org/wiki/Schermerhorn_Symphony_Center.  The Center is on a fairly small plot of land and it is buried among much larger buildings.  It is dwarfed by the behemoth Country Music Hall of Fame close by.  It is neoclassical style and certainly not on the cutting edge of architecture, but it doesn't need to be. Check out AMC's reviews of the Holland Center in Omaha and the Kaufman Center in Kansas City to get a glimpse of a bit more exciting architecture. There was a prefab horse barn being constructed next door.  AMC can oily hope that it is not permanent.   Parking near the Center is terribly expensive. 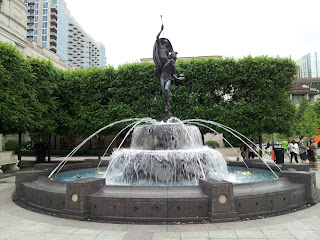 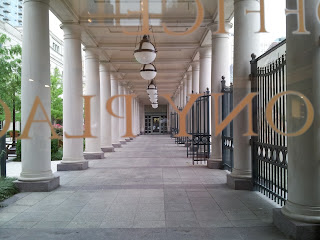 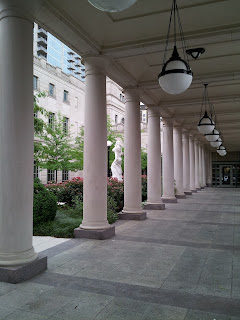 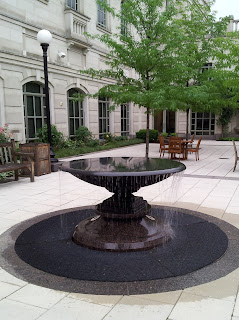 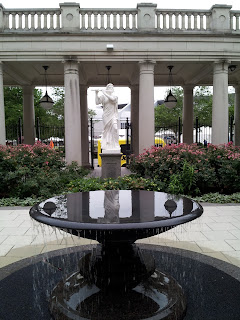 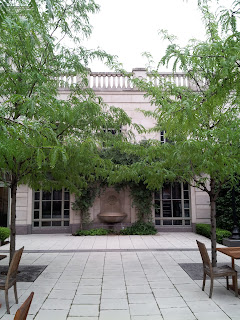 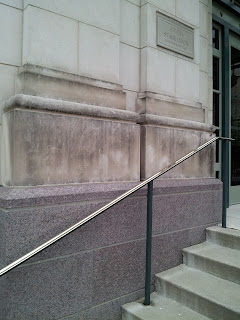 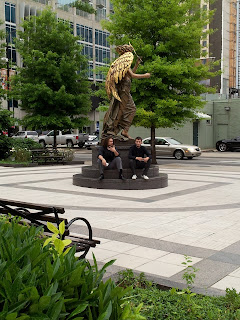 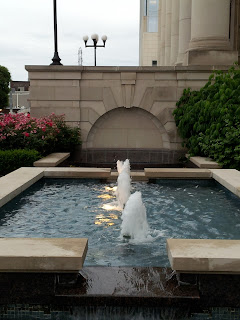 The Center sits on a smallish plaza that includes a nice fountain and statue.  There is a colonnade on one side of the building, which adds to an architectural surround to a small plaza.  AMC was surprised to see the exterior already showing a good deal of grime on it- maybe it is mold or left overs from the flood that engulfed a goodly portion of the building a few years ago.

AMC had a special treat- Joshua Bell was walking on the side walk and AMC snapped a photo: 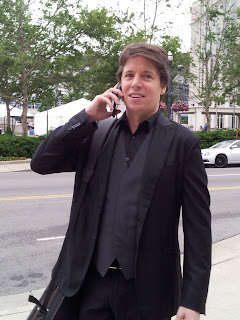 The interior of the building is fairly Spartan, with few decorative elements, save some rather elaborate light fixtures that appear to be a combination of end-of-the-nineteenth century, combined with a bit of the modern.  Overall it is a clean look with a retro feel. The lobby areas are in keeping with the overall size of the building, i.e., small. 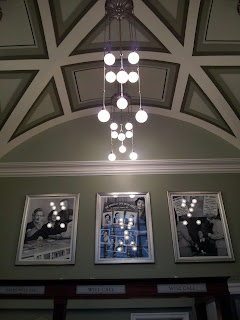 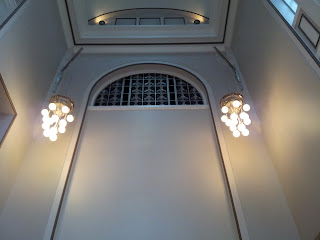 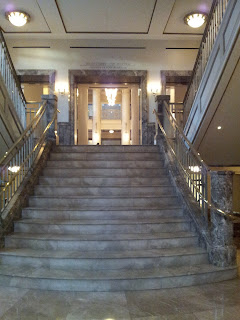 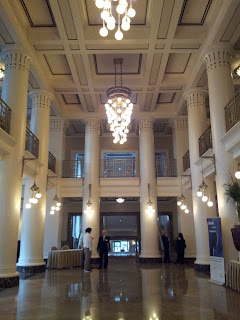 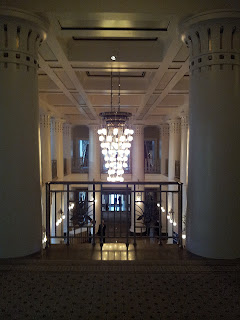 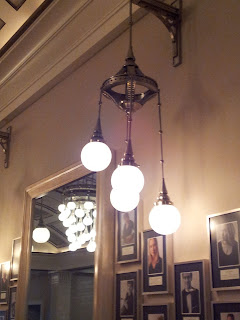 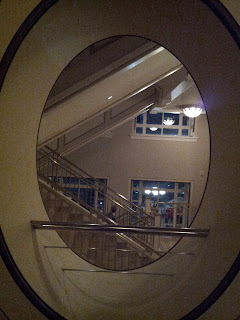 Of course, where the rubber meets the road is the auditorium itself.  It seats 1844 people and has an ample stage, plus seats for choral groups.  There is a prominent concert organ behind the stage.  The hall in configured in the traditional shoe box shape. There is a wooden floor.  There are two aisles in the orchestra section.  The stage include a built in riser at the back of the orchestra to accommodate the brass and percussion sections.  The acoustics are quite intimate so that the listener can localize each instrument and there is no smear in the grand fortes.  The pianissimos are transparent.  There is no harshness in the tuttis or solos.  The closest match to the acoustics of the Schermerhorn are those of the Salle Pleyel in Paris. the drawback to these acoustics is that audience generated noise is also highlighted.  This was a cough-laden, program dropping group of patrons.  There was one gentleman who hacked numerous times during the performance.  AMC found it to be irritating, if not somewhat sickening.

The Schermorhorn architects drew inspiration from European halls that have separations between some seating sections.  Some of those sections also have small tables. 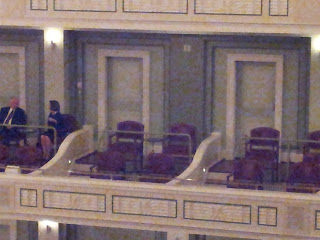 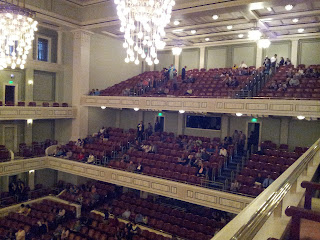 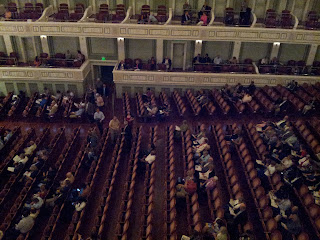 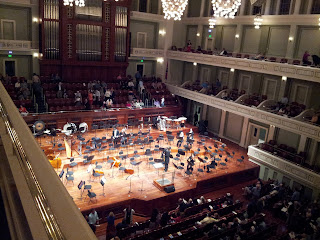 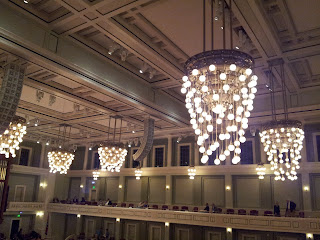 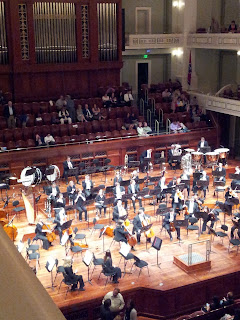 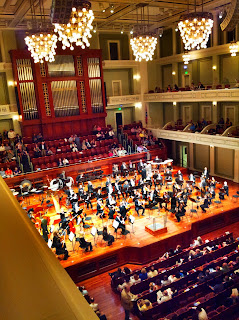 The chandeliers are also a hybrid modern and Belle Epoque. They are functional if not particularly attractive.

The concert began with the Principal Flutist taking to microphone and stage center to thank major benefactors for their support of the NSO.  To AMC this was a wonderful touch and judging by the audience reaction, it was for them also.  The musicians of the NSO also appeared in the lobby post performance in their civvies.  This was another great way to connect to the audience.  There was also a pre-performance announcement to silence cell phones.  The NSO also permits photographs when the houselights are on, even when the orchestra is in place.  Seems reasonable to AMC, who took advantage of the opportunity.

The audience was well dressed and appeared to skew younger than some others AMC has seen including that for AMC's hometown band.

So what about the performance you might ask. The Blumine was luminous.  It is a piece more transparent than most of Mahler's symphonies, even though it was to be included as part of the First Symphony.  AMC thought that scheduling two Mahler pieces would be the audience kiss-of-death, but it was not- the house was about 90% of capacity.  The only drawback to the performance was the inclusion of a cell phone ring at the point between the music stopping and the applause starting.  Bummer- AMC guess that someone didn't heed the earlier announcement.

The Meyer Concerto is an example of a totally accessible, melodic, and interesting modern piece of music.  It was commissioned by the NSO,, the Aspen Music Festival, and the Toronto Symphony.  AMC was surprised at how well the violin and double bass meshed with each other.  The bass was amplified in order to give an equal chance with the violin's higher register.  Both Bell and Meyer are top flight performers.  Bell rarely seems to make a mistake.  This is an enjoyable piece of music and AMC encourages its promulgation into the repertory.  It should not offend even the knee jerk haters of modern music although AMC doesn't particularly care of their opinions except to the degree that it hurts ticket sales.

The final work was Mahler's monumental Symphony No. 1 "The Titan."  The orchestra was augmented with contract players so it filled the stage.  AMC was surprised that so many musicians could be found to play this work, but then AMC was reminded that this was Nashville, where music is the stock in trade.  This performance was the highlight of AMC's domestic classical music consumption this season.  The orchestra was actually astonishing in its playing.  Maestro Guerrero also manged to highlight some parts that are often ignored, for example the bass clarinet's contributions to the opening.  The off-stage brass trio was impressive.  This is over-the-top music that uses sounds that range from very small to incredibly large sounds.  The NSO was able to accomplish this range quite effectively.  The finale brings out all of the stops.  When the seven horns players and trumpet and trombone players stood at the end, it was spine tingling.  The clarinets, while good were not quite at the level of Laura Ardan at the Atlanta Symphony.  The solos performed by Concertmaster Jun Iwasaki and Principal Cello Anthony LaMarchina were wonderful.  The percussion was sharp and well defined; AMC has never heard a triangle that was so beautifully steely.  The bass drums provided a deep and throaty undercurrent when they played.  The French horns played immaculately.  The cellos were acoustically front and center during the performance. The NSO was seated in the European style, with the cellos seated where the second violins are in most US orchestras.  The violas were seated inside of the second violins on the right side of the orchestra.  AMC thinks that this is a wonderful arrangement for highlighting the deeper strings, which are sometimes lost in the sound picture.  As AMC said this was a great performance.  It makes AMC want to return to hear more from the NSA next season.

There was a performance by a student quartet in the lobby post-performance. This also was a nice touch.

The NSO has one of the largest operating budgets of any major US orchestra.  Maybe it has to do with Schermerhorn Symphony Center costs, adt it does have an ambitious schedule.  Its program book is very very nice in content and finish also.

One final question- how can Omaha, Kansas City, and  Nashville afford new concert halls and not Atlanta?  Maybe Atlanta is wanting something too monumental.  Maybe Woodruff and ASO management are making the excellent be the enemy of the good.