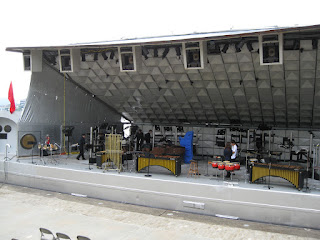 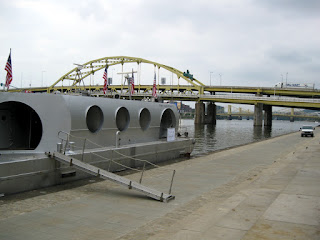 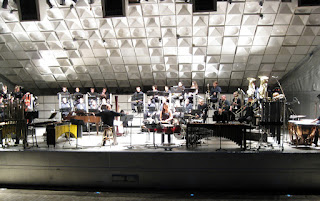 The American Wind Symphony presented a concert for its barge in the Allegheny River at Point State Park in Pittsburgh on July 21. I have many fond memories of hearing this group many decades ago in the same location.  But Pittsburgh has changed mightily since then and so has my ear. The AWS always programmed new works that seemed challenging and fresh.

For some reason, the AWS has not played in Pittsburgh for many years.  I suspect it is because of the usual stumbling block in the arts-$$$$$.

The AWS plays on a moored barge named Point-counterpoint II.  It was designed specifically for the AWS by Alfred Kahn, one of the great architects of the last century.  Click here for more information: http://www.americanwindsymphonyorchestra.org/architecture.html

I make it a policy not to review performances by amateur musicians and performances that rely on amplifiers and loudspeakers.  Little is to be gain by critiquing the playing and amplification nearly always leads to imbalances and crude spotlighting of instruments.  It can turn a clarinet into the AFLAC goose.
That said, I do have a few comments about this performance.  Robert Austin Boudreau is the creative force behind the AWS and, yes, he has been the cause of much new wind music being created.  But I did not like him telling me how great he is.  Better it had been written somewhere or the words would have come out of someone else's mouth.  Maybe his arrogance has grown with his age, but I found it tedious.

I also did not like Boudreau chastising the City of Pittsburgh for not providing funding for this performance while he was passing the hat (a drum actually) around for donations.  With an audience of maybe 500, I am sure that the citizens of the city helped support his work.  I also found the lack of having a program available a bit odd.  Apparently there was one for sale ($5), but I did not see it.

Now a word about the venue.  There is no doubt that the Pittsburgh riverfront is primo.  Sitting by the beautiful water listening to wind music is a treat until a pleasure boat moors nearby  blaring some country music.  The boat owners were so numb that an audience member had to walk maybe 500 feet to ask them to turn down their music.  They did, but a few minutes later another pleasure craft docked next to them with their own music.  It took awhile for them to get the idea.  A train across the river also didn't get the idea, but I can understand that a bit more.  Finally, a Pirates game was in progress across the river.  I was surprised that it did not interfere with the concert more.  My biggest concern about the venue was the lack of nearby toilet facilities.  I lament the lack of toilets and food that are easily accessible to the riverfront here.

I hope that the AWS returns.  In fact, I hope that it could be docked permanently in Pittsburgh.  It is a great asset, particularly since the organization was born out of Pittsburgh-based philanthropy.  Maybe it is were around more, Maestro Boudreau would not have to remind everyone of his greatness.
at 4:08 PM