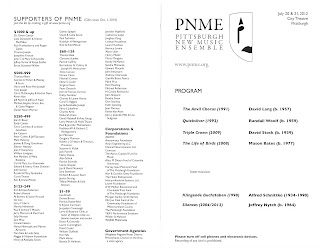 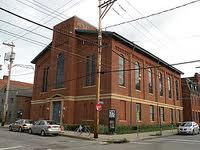 You have to know Pittsburgh.  In the heart of the downtown among the steel and glass towers  is the very elegant Heinz Hall, the home of the grand Pittsburgh Symphony.  About a mile away, across the Monongahela River, is the Southside of the city.  It is made up of trendy eateries and shops located where working class bars and stores used to be.  It is a gritty area that mixes contemporary architecture with the largest collection of Victorian storefronts in the US.  In the midst of this urban mix is the City Theater, which is located in an old church.  It is surrounded by old warehouses, cobblestone streets, and row houses.  It sits at a great psychological distance from Heinz Hall.

Maybe this distance is exactly what makes the City Theater the perfect venue for  the Pittsburgh New Music Ensemble.  The auditorium seats about 250 people, and it appeared to be nearly sold out for the PNME concert.  This in itself was remarkable.  It was also a very quiet audience- no coughing, hacking or snoring.

David Lang is an American composer living in New York City. He was awarded the 2008 Pulitzer Prize for Music for The Little Match Girl Passion. His The Anvil Chorus is a one-person tour de force of all sorts of percussive sounds, ranging from a kick bass drum, to a home-made cymbal, to metal blocks.  The soloist in this performance was Sean Connors.  The staging of the piece was wonderful.  Connors and his instruments were on a small platform that was about 15 feet off of the floor, accessible by steps.  All of this was behind a black scrim.  When the piece began, a single spotlight was directed at the music making and it was quite a dramatic setting.  This piece is hypnotic and engaging.  When the music really begins to move, the percussive sounds echo in the auditorium, which creates another line of music superimposed on the actual music.  It an intriguing effect that might not be as apparent in a less friendly acoustic space.  I have included a YouTube video of the piece.

Randall Woolf is an American composer known for his diverse contemporary works, and in particular for his works based on children's literature and collaborative work with youth organizations.  His Quicksilver from 1992 was performed by Lindsey Goodman, flute, and Natalie Shaw, violin.  The piece consists of rather rapid notes that flitter and flutter.  At times it struck me as the musical equivalent of the parallel play of children.  It seemed like a great soundtrack for a cartoon about 2 butterflies dancing together.  Only at the end of the piece did the two parts come together.  I mentioned my interpretation to Ms. Goodman at the conclusion of the concert and she granted that Mr. Woolf would probably like my take on it.  It was interesting to me that Ms. Goodman had her music on an iPad for her performance.  The light from its screen highlighted her face nicely, but seemed to require her to sit a bit closer to the music stand that might be required when using a paper score.
Stock's piece manages to make each musician make every conceivable sound possible from his/her instrument.  The piano strings were plucked, metal was bowed, and the cello became a piano.  This was not a particularly lyrical piece but was very engaging.  The audience seemed enthralled as indicated by its near total silence during the performance.

Bates' The Life of Birds is written for  flute, clarinet, violin, and cello.  The 35-year old composer is best known for his symphonic works and he is composer-in-residence with the Chicago Symphony Orchestra.  Six vignettes comprise this work, with the titles "Moving Parts," "Parakeet Daydream," "The Caged Bird Sings," "On a Wire: Mating Dance," "Old World Flycatcher--" and "Moving Parts."  Each is introduced with a brief statement about the movement, projected on a screen above the musician.  The composer describes the work as "a collection of miniatures exploring different aspects of the aviary." (see masonbates.com/music).  The music is full of the fluttering of feathers and parts of it reminded me of Le Histoire du Soldat by Stravinsky.   I am not suggesting it is derivative music, rather just that I free associate a lot.

Schnittke's music is chameleon-like.  He can take on the color of various styles ranging from the starkly modern to neo-romantic.  Klingende Buchstaben is a beautiful piece for solo cello, here played by Norbert Lewandowski, who was lyrical and aggressive when each was needed.

The final work, Silences, by Jeffrey Nytch was spectacular.  The baritone soloist was Timothy Jones , who was accompanied by flute, clarinet, violin, cello, piano, and percussion.  This piece ran the gamut from love-intoxication to bitter defeat and hurt.  Please go to http://jeffreynytch.com/works.html to listen to the full 26 minute piece.  Nytch said that he has worked on this piece in two different compositional periods- 2004 and 2012.   Silences is stunning music and it is destined to be acclaimed.  May I be the first.

The PNME concert was exciting, cutting edge, intriguing, and a whole host of other adjectives.  Pittsburgh should be proud to have this pioneering group in its midst.  It is composed of talented performers who are will to take a risk.  The City Theater venue is perfect for this group.  It allows for creative lighting and visual effects.  It's a great combination.  I hope that I can hear the PNME again.

Thanks to all benefactors who made this concert possible for the rest of us.