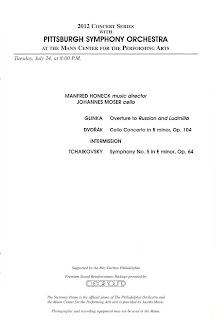 Thanks to all of the donors who made the performance of the Pittsburgh Symphony at the Mann Music Center in Philadelphia possible for the rest of us.

"Our orchestra used to sound like this before Eschenbach"
"Can you believe how they were so together?"
"It seemed like such a big orchestra."
"And the conductor wrote some of the program notes."
These were some of the comments I overheard during this concert.  Quite some compliments from patrons who are used to their home band- the Philadelphia Orchestra.

The Glinka was fast paced and played to a technical "T".  It is difficult to believe such incredible ensemble, even on a stage where hearing each other must be very difficult.

Then came Moser and Honeck together.  I reviewed Moser's turn with the Atlanta Symphony this past season.  He was dynamite then and even more so with Maestro Honeck.  They seem to have musical simpatico as demonstrated by their cheerful glances at each other when they know they struck home.  Moser is a maximum-overdrive cellist.  He has a bit growling sound when needed, and when lyricism counts he has that also.  He is simply one of the best and his Dvorak is superb.  His duet with Noah Balgley-Bendix, the 26-year old PSO concertmaster, was so precise that it was as if they had some of neuronal connection.  It was simply extraordinary.

Then came Honeck's Tchaikovsky.  Much has been written about his interpretation.  Most like it- a few don't, especially those pesky provincial reviewers in London.  Honeck's is  a very personal interpretation of the music.  However, he does not add it should not be added to nor subtracted either.  Indeed he may bend a phrase by slowing it down, but he does so consistently so it reflects a solid approach to the music.  He provided his own written interpretation of the Symphony that was included with the program notes and which I apparently proceeded to lose. I demonstrates how he translates what he believes to be the composers intent to the actual performance.  It worked.  One of the techniques that Honeck uses, for example, is to give the contrabassoon enough latitude to actually be heard as it plays in unison with the basses.  I have only heard Abravanel do this in old recordings with his Salt Lake Orchestra. This adds a dramatic growl to the bass line. William Caballero's horn playing in the languorous second movement has to be heard to be believed.  He managed to play it as if his horn was a violin.  It was smooth, elegant, restrained and perfectly pitched.  He was totally in control of his breathe, and his instrument.  What a contrast to what other's present in their performances.  There were no burbles nor sliding into notes.  Both Caballero and Honeck shaped this presentation perfectly.  The grand final movement provided a stage for Principal Trumpeter Vosburgh to show off his section and for the strings to shine.  Honeck whips this piece to a high energy level that never gets out of hand.  He makes his hero's journey end in triumphant joy.  To some degree, Honeck helps Tchaikovsky become a bit more Mahleresque that what most of us are used to, but it is a magnificent approach.

This was a smashing performance that had to be heard to be believed. There was thunderous applause and numerous curtain calls.  there were two encores, one from Bizet's Carmen, and one by Khatchaturian.  There was a standing O after each of those performances also.

The Mann Music Center is a wonderful outdoor facility but, like many of us, showing its age.  I was fortunate to be in the fifth row in the pit.  I was able to share the air conditioning provided for the orchestra.  It was an infernally hot and humid evening in Philadelphia. By sitting so close to the stage I was also able to avoid listening to the concert through the speakers used to enable those sitting on the lawn to hear.

I know that dining alfresco is fun, but I noticed that the Mann's lawn is so far away from the stage that you might as well watch the concert on your cell phone through its tiny speakers.  I would have rather eaten at home.

If you get a chance to hear this orchestra and this conductor grab the opportunity.  Even given the bevy of superstars as past music directors (e.g., Reiner, Maazel, Previn, Jansons), this may be the golden age of the PSO.
at 5:33 PM