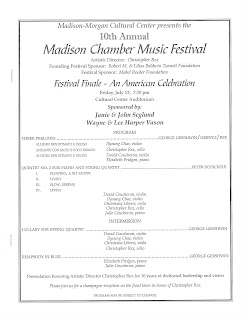 The finale of the 10th Annual Madison (GA) Chamber Music Festival was held on July 13, 2012 at the Madison Cultural Center Auditorium.  Thanks should go to Janie and John Seglund and Wayne and Lee Harper Vason for their generous support of this concert.  A special shout-out to Ms. Gloria Stuhlmiller for providing me with a ticket to attend this special event.

There were several highlights to this concert.  David Coucheron's performance of Gershwin's Prelude (marked Allegro Ben Ritmato e Deciso) was a standout.  Coucheron plays his violin broadly with razor sharp intonation and precise bowing.  He never condescends to the music and splays even lightweight music with the same intensity with which he approaches masterworks.  He certainly played the Gershwin as if it were a major work, and by doing so, made it seem  more important than it probably is.

The Schickele piece was a surprise.  For the humorist composer, who has gained celebrity as "PDQ Bach," his Quintet No. 2 (In Memoriam) is stunningly beautiful.  I could find only one recording of on Amazon and there appears to be no information about the context for the music.   I have attached a video from YouTube but it's of the final movement that I think is the least impressive of the four. It contains many references to American music and musical styles.  This Quintet was characterized by Christopher Rex, Music Director of the Festival, as being very Brahms-like.  Indeed that was the case  but I heard other more contemporary references in the work.  The first and third movements are simply beautiful.  They have much in common with minimalist works, especially in the piano score.  I also I found reference to, or influence by,  Arvo Part, Philip Glass, and Henryk Gorecki.  In some lyrical passages the layering of the voices also seemed a bit New Age-y, and I do not mean that in any way to disparage the music.  The piece has many duets played in octaves, again reminiscent of Brahms.  After hearing this piece, I think it regrettable that we do not have more of Schickele's serious music.  Standouts in this performance were Christian Liberis on the viola.  She has a warm yet forward sound that did not become lost among the other strings.  Julie Coucheron made the baby grand piano sound quite grand.  David Coucheron again played strongly and assertively.

The Gershwin Lullaby is  a slight, but beautiful piece.  It was played handsomely here.  The final work was the piano version of Gerswhin's Rhapsody in Blue.  I personally like this better than the orchestral version because  it seems to highlight the work's structural features that seem to get swallowed up in the flashiness of the orchestra.  Elizabeth Pridgen carried most of the work.  She played a baby grand that had a more mellow and sweeter tone than Coucheron's instrument. This may have been due to Pridgen's piano having the lid up where Coucheron's piano seemed to have the lid removed.   Both pianists were outstanding and neither lack the technical skill needed to play this music in a big and brash way.

The concert was followed up by a presentation to Christopher Rex of a portrait of himself, given for his 10-years of leadership of this series.

Ms. Rebecca Bonas is the staff person of the Cultural Center who manages the business side of the Festival.  She deserves much credit for helping to make this series first-rate.
at 2:29 PM