ABT and STLSO- a great pairing...

The Lied Center for Performing Arts is located on the campus of the University of Nebraska-Lincoln campus.  It is host to a wide-range of performing groups, including a recent pairing of the American Ballet Theater (ABT) and the St. Louis Symphony Orchestra STLSO) in a varied ballet program.

The Lied Center has an auditorium that can seat up to 2400 people.  It is designed as a multi-purpose arts center, so the seats are arranged in theater style.  It was built in the early 1990’s and it shows its age, mostly in the lobby areas.  Its architecture appears to be almost late-Brutalist, but it fits nicely on the campus, adjacent to the Philip Johnson-designed Sheldon Art Gallery.  The Lied auditorium is painted in a warm terra cotta color, and the proscenium arch is in gold.  The seats are bright red velvet, as is the main curtain.  The stage shell, when in place, matches the terra cotta of the walls.  The Lied Center is one of the largest university-related performing arts centers in the US (go here for a discussion of 25 such centers across the US: https://www.bestvalueschools.com/25-most-amazing-university-performing-arts-centers/).

But most important, its acoustics are remarkable; the hall is warm and reverberant and seems to work well for soloists as well as for full symphony orchestra.

The joint performance of the ABT and the STLSO was the only such pairing of these two groups in the US.  In fact, this was the first time that the symphony was actually accompanying a ballet performance, at least according to a radio interview with one of the dancers.  (It is of note that the Nebraska Public Radio Network continues to program classical music throughout the day, while still providing National Public Radio new shows.  The locally curated playlist does vary from the “top 40” format of many public radio stations; on Friday afternoon there is a playlist created by request from listeners and many of the requests are for concert warhorses or movie soundtracks).

The ABT program began with Bernstein’s 1954-“Serenade after Plato’s Symposium,” a work that sounds not unlike some of Stravinsky’s Oedipus Rex and Apollon Musagete. Plato is not often heard, but it is a nice alternative to Bernstein’s Broadway-infused music.   (Note:  The Omaha Symphony Orchestra has programmed the work for performance at the Holland Center in mid-April) The composer described it as a dialogue in praise of love; it has five sections of the work feature a violin soloist, here played by Kobi Malkin, in a nearly faultless performance. Mr. Malkin played in the pit, accompanied by the STLSO strings, percussion, and harp, with the balance between orchestra and soloist being quite refined.  Credit is due Music Director Ormsby Wilkins for making it all work together.  The ABT premiered the ballet in 2016, with choreography by Artist-in-Residence Alexei Ratmansky.  The eight male dancers were strong, with seemingly boundless energy, and their form was elegant and assured. Their lines were impeccable.  The stand-out, and audience favorite, was Daniil Simkim, one of the Principal dancers.  His jumps and turns defied gravity and his athleticism was thoroughly enjoyable.

Next was the Act II Pas de Deux from Swan Lake (choreography by Lev Ivanov), performed by Misty Copeland and Herman Cornejo.   If one wanted to see a ballet performance that was flawless, this was it.  Copeland, who started ballet dancing relatively late at age 13, was elegant and confident.  Ivanov was a perfect partner who brought his own strength and energy to the performance. David LaMarche conducted the STLSO in a beautifully sensitive performance.

The main work of the evening was Alexei Ratmansky’s choreography for Stravinsky’s “Firebird.”  The title character was danced by the brilliant Christine Shevchenko and Ivan was danced by Thomas Forster.  Unfortunately, Forster did not quite have the stage-presence and style to make his a stand-out performance.  At times he appeared sluggish, and he lacked the long, graceful lines of some of his colleagues.   The firebird was one of a flock of firebirds, so why this particular firebird captures Ivan’s attention, and further, why she just didn’t fly away, was a mystery never addressed in this version of the folktale. Mr. Ratmansky’s conception of the maidens also seemed jarring. They looked and acted like leprechauns dressed in green dresses and green wigs- all giggly and immature.  How Ivan could pick any of them for his love interest seemed beyond this conception of the ballet.  The costumes, especially the firebirds, were beautifully done in bright red.  The scenery was clever, with lightning to add to the drama and red highlights on the forest trees.  When the evil Kaschei enters, he is preceded by his huge shadow lurking in the trees. From time to time, his hands emit magic black smoke that intensified his ominous qualities.  But these effects could not make up for the difficulty of believing that Ivan would become infatuated with any of the silly maidens, let alone the one he actually chose.  All in all, it was a disappointing performance, mostly because of Ratmansky’s conception of the story.  The STLSO performed Stravinsky’s music as one would expect from a virtuosic organization.  Ormsby Wilkins conducted.

In spite of the slight disappointment of the Firebird choreography, it was a great night of top-flight ballet and symphonic performance.  The Lied Center acoustics added to the evening’s success. 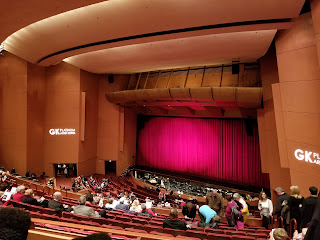 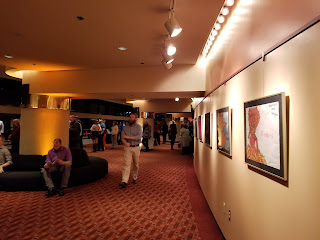 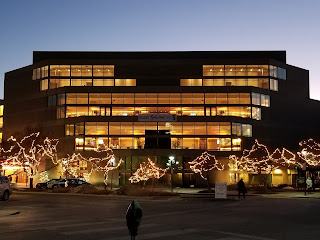 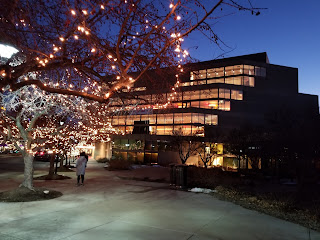 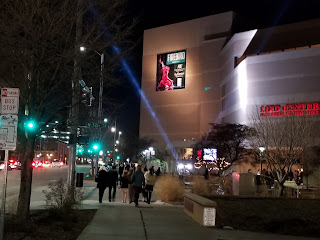 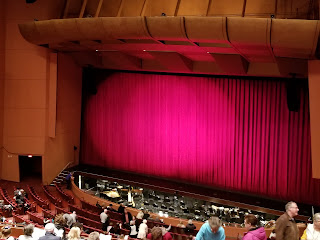