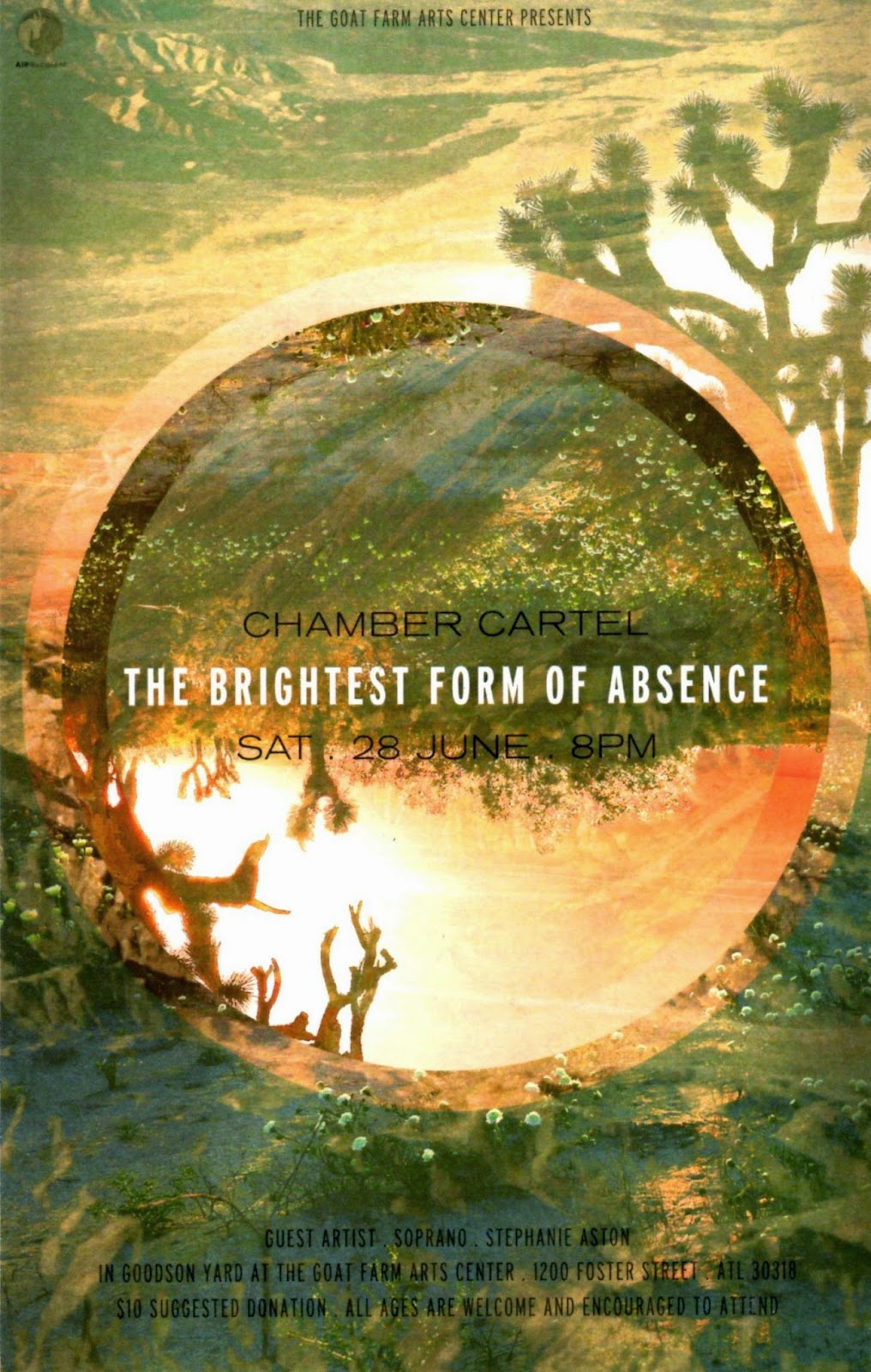 Chamber Cartel presented its latest concert at the Goat Farm in Atlanta.  The goat Farm is an old industrial site that has been repurposed to support artists and art.  The Cartel's conference was in one of the old factory buildings with grand windows made up of many separate panes of glass.  The program started with Jason Eckardt's "Tongues, written in 2001.  It features a small ensemble with a soprano soloist who mostly sings in made up words, also known as glossolalia.  You might be familiar with glossolalic music, e.g., Sigur Ros and Dead Can Dance.  This piece was intriguing and the soloist, Stephanie Aston was spectacular.  The music seems to be a series of musical phrases or fragments that are seemingly independent each from the other.  Thus, traditional themes and development did not appear to be present. For AMC "Tongues" should be heard repeatedly to appreciate it.

See the composer's program notes below.

Here is an excerpt from the piece:

AMC found the video to be more satisfying than the live performance.  That's not a knock against Chamber Cartel, but rather an observation that recordings seem to provide a more integrated sound.  The recording is more unified, while in performance, the individual instruments are so spotlighted that it is difficult for AMC to get the integrated whole.  AMC has found this to be true with many New Music pieces, and it is true for the second piece on the program also.

"The Brightest Form of Absence" by Hans Thomalla was performed next.  The piece employed the largest ensemble that AMC has seen in a Chamber Cartel performance.  This piece was accompanied by a video that was projected on a scrim-like screen hanging about the performers.  Again Ms. Aston was in top form with difficult music.  But, AMC is left saying the same things he said in the review of the Eckardt piece. AMC admits this is not very helpful.

Here is an excerpt from the Thomalla piece:


Here are the composers' descriptions of their works: 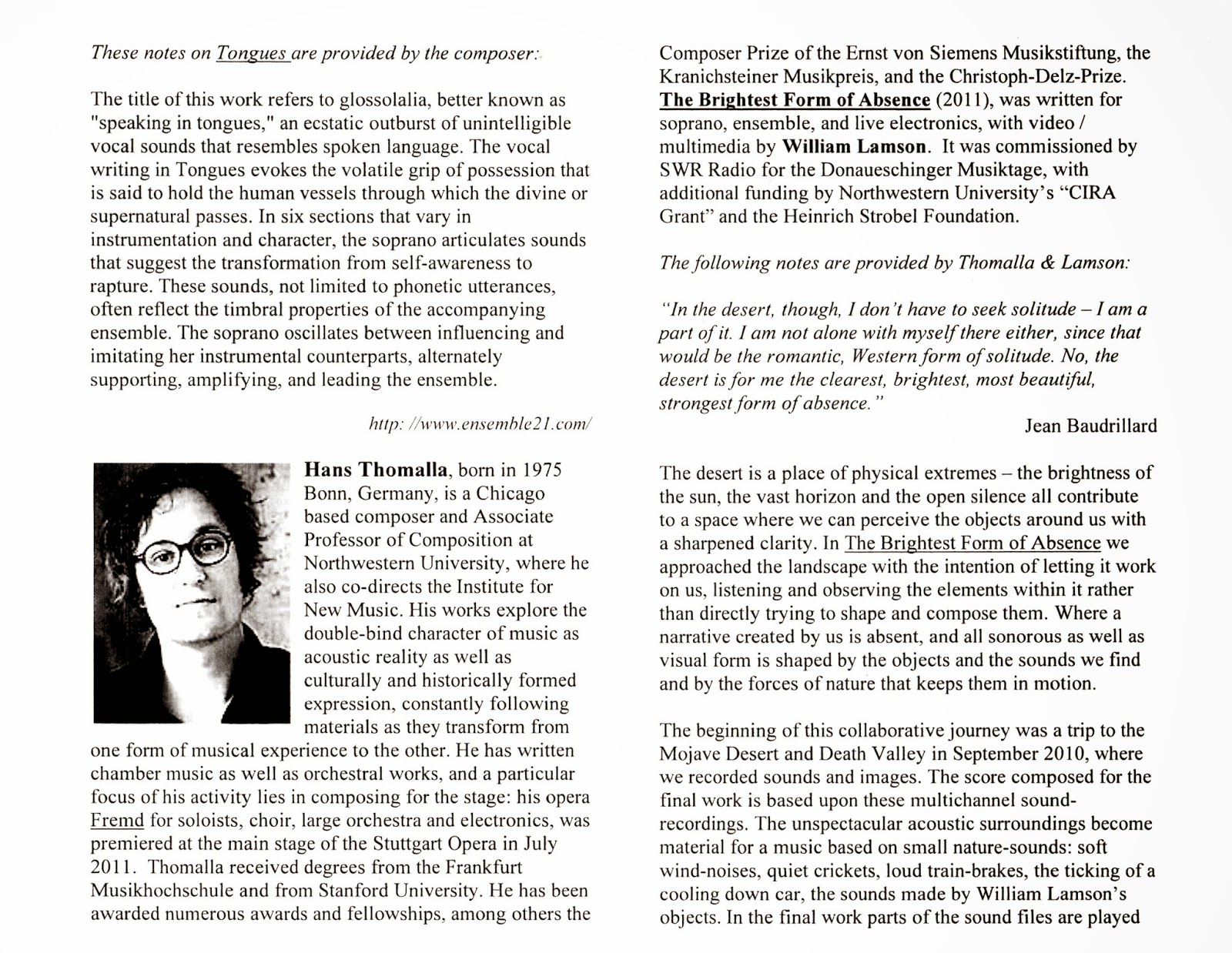 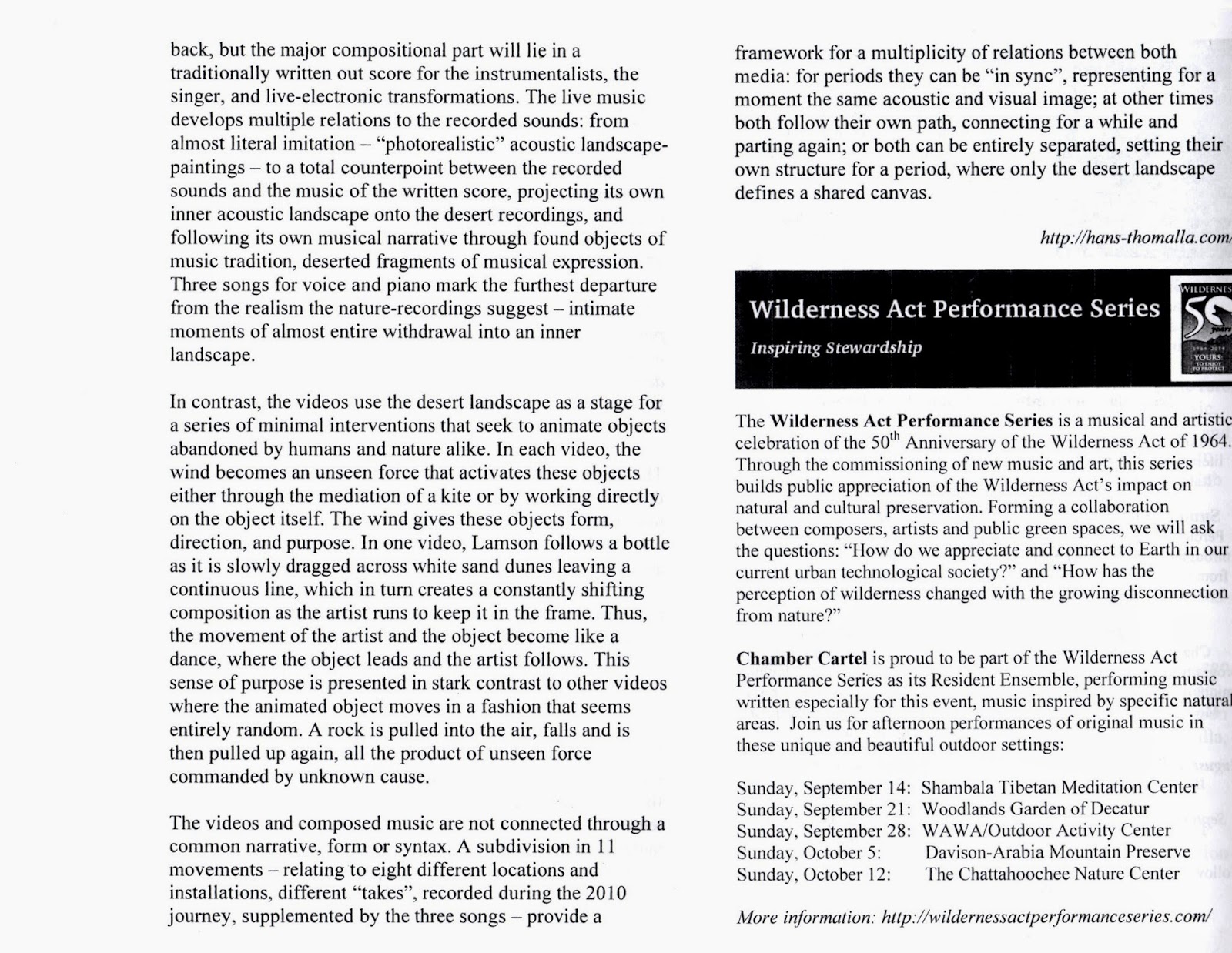 AMC will admit there is not much in this review based on the notion it is better to say little than betray my ignorance.  But AMC does have a few miscellaneous comments:
1. Caleb herro demonstrated his percussion skills in both works.  Good job Caleb!
2.  Chamber Cartel's program always have the best graphics.
3.  Chamber Cartel's performances are usually well- staged.
4.  The LED lighting was great for this performance.
5.  Several trains rolled by.  Some almost seemed to compliment the music, but others were a real distraction.
6.  It was incredibly hot in the performance space  AMC could only think about how it must of been for those who actually had to work in the space during Atlanta's heat and humidity
7.  The chairs were incredibly uncomfortable.  They looked like IKEA's cheap variety.  They were not designed for humans.

Final note:  Every lover of Western Art Music should treat themselves to concerts like those of Chamber Cartel.  It broadens one's horizons.