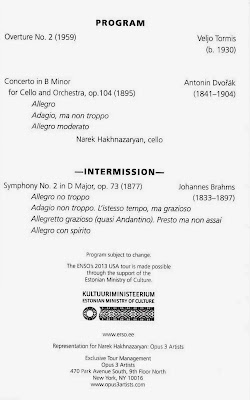 The Estonian National Symphony Orchestra (ENSO), under the direction of Conductor Nikolai Alexeev, presented a concert at Emory University's Schwartz Center for Performing Arts.  Where to begin?  Where to begin?

As best as AMC could tell, this was a smallish ensemble that seemed a bit squeezed on the Schwartz stage.  AMC has never heard a full orchestra in the lush environment of this venue and his seat was in the front row all the way to stage left.  But this was sound to remember. AMC believes that most people wouldn't even know where Estonia is and safe to say, the ENSO has had some difficult times.  But one could never tell from this performance.  AMC has never hear clarinets with such a sweet, almost rounded, sound that was absolutely lovely in the Dvorak.  In fact, its woodwinds overall were warm and wonderful but in an acoustic environment that enable the listener to pin point every instrumental group.  The basses packed a punch, but never unnecessarily so.  The cellos had a bite and slight growl; the contrabasson had that wonderful buzz.  AMC's only quibble was with the sound of the oboe that sounded a bit unpolished, especially when playing solo.  The violins were golden and tight.  The brass benefited from  an environment so lush, yet focused,  that AMC could hear the first rush of air into them.  For anyone who is a fan of the wonderful sounds that make up a symphony orchestra, as AMC is, then this was the performance to hear.

Maestro Alexeev busies himself with process of conducting.  He cues entrances, controls dynamics and maintains a sharp beat.  His face was expressionless but rather stern.

The Tormis "Overture", which is unfamiliar to AMC, was a great, thrilling piece that is easily understandable on first hearing.  AMC tends to believe that any new piece of music that can't be understood on first hearing means that it is less likely that one will return.  AMC doesn't argue that a new composition should be so banal that it takes little or no effort to "get it," but there ought to be a balance between accessibility and challenge. The Tormis work achieves that delicate balance.  The ENSO was brilliant in its performance.
May we please hear more of Mr. Tormis in Atlanta?

Narek Hakhnazaryan was the cello soloist in the Dvorak Cello concerto, one of the preeminent cello works, and concertos in the literature.  Mr. Hakhanazyran  was awarded the gold medal at the 2011 International Tchaikovsky Competition.  He is 25 years old and was born in Armenia.

AMC most recently heard the Dvorak played by the Pittsburgh Symphony conducted by Manfred Honeck with soloist Johannes Moser.  AMC's review is here: http://www.atlantamusiccritic.com/2012/07/superstars.html.  That performance is AMC's benchmark, so Mr. Hakhnzaryan and the ENSO are up against formidable forces.  So, how did they do?  Actually quite well.  The horns were wonderful and in tune.  The winds were breathtaking (pardon the slight pun) and the strings gorgeous. But the real triumph was the solo cello.  Hakhnazaryan is a technical wizard.  He is dynamically strong, with a great range.  The sound of his cello is gorgeous, which was helped by the acoustics.  Cellos never sound like this in Atlanta's Symphony Hall, a fact that is lamentable.  On occasion, AMC felt that Maestro Alexeev let the ENSO get a bit too loud against the cello, but no big deal.  Given the standing ovation he received (deserved in my opinion in comparison to the gratuitous SO's in symphony Hall), Mr. Hakhnazaryan played two encores.  The first was the touching "Lamentatio" by Giovanni Sollima, which is scored to have the cello soloist sing.  While the YouTube version by Mr. Hakhazaryan seems strangely out of tune, here it is:

So great was the response,  a second encore was presented, the Bach "Sarabande" from his Suite No. 3 (this sounds a bit pitchy also):

The final work was the Brahms.  AMC's mild bias is that this work is the pinnacle of the Romantic symphonic literature. The ENSA played like they were on fire.  The Brahmsian signature of the horns and wood winds playing together went off without a hitch, which is not often the case in Atlanta.  The strings were smooth with great ensemble.  The tempi were on the mark.  AMC was delighted with this performance.

AMC is grateful to the Candler Concert Series for bringing in the ENSO.  Atlanta is not one of the major cultural hubs that hosts touring symphonies.  That usually only happens in the major markets, such as New York and Chicago.  So it was good to hear something other than the great Atlanta Symphony.  AMC hopes to hear more from other notable orchestras in local venues.  Well, AMC can wish.