Slow and easy wins the race or at least ends the race...... 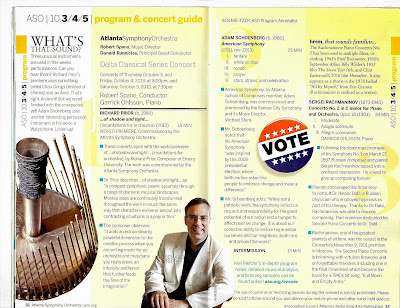 The Atlanta Symphony Orchestra concert contained several firsts, and in some cases, recent changes and additions.  It also had some interesting music.

The most obvious changes included the newly formatted program booklet that contains a month's worth of concerts, with brief notes for each.  The graphics are greatly  improved, but detailed program notes are missing.  Each article, however, contains a web link where patrons can download full notes by program annotator Ken Melzer.  A sample appears above.  AMC is a big supported of reducing program costs and training patrons to use the web more.  AMC also likes having a month's programming contained in one booklet.  Other symphonies do this and it seems to work for them.  AMC might like a little less casualness but ASO management should be applauded for making the effort to change.

The second most obvious recent change is the new acoustical shell.  Here are photos before and after the installation of the shell.
BEFORE 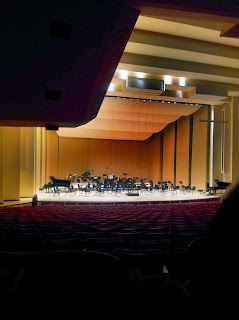 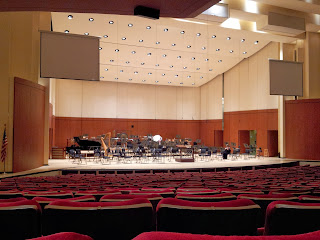 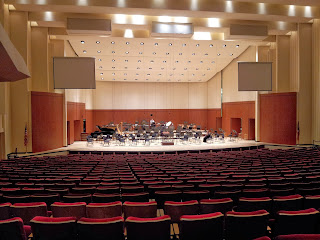 The new shell is a nice visual addition to the rather bleak and spare pre-shell Symphony Hall.  But the proof, of course, is in the listening.  AMC was fortunate to sit on stage for an open rehearsal of the ASO. The sound was stunning.  Even though AMC was seated right and downstage, each section of the orchestra could clearly be head.  It must be a relief for the orchestra members to be able to hear each other.  In fact, some confirmed that it was a much needed improvement.

Related to the new shell, was new seating arrangements for the orchestra.  There seemed to be higher risers in the rear of the orchestra from what was there previously.  In addition, the violas are now seated to the right of the podium.  The cellos are arrayed in front of the conductor,  AMC endorses this idea since the sound of the cellos always seemed a bit reticent in Symphony Hall.

One patron complained that she could no longer see the rear of the orchestra from the seats she has held from many years.  She also complained that she could no longer hear the cellos. AMC tends to agree about the cellos, but the violas sounded nicely focused.  The hall also seems to still lack a certain bass-punch, especially given what can be heard on stage.   AMC also felt that the solo piano sounded a bit thin and a tad echo-y.

Another change is that the hallways have been re-carpeted.  AMC encourages the Arts Center management to consider painting the public hallway areas.   They are currently the same bland color as the hall except from dark gray contrast walls.  AMC would like to see the hall painted, but one can't have everything.  But- if it were made a bid less stark, the experience for patrons might be a bit warmer.  Also, new concert halls and changes to existing ones tend to cause an uptick in ticket sales, at least in the near term.

Finally the ASO musicians are finding there way out into the lobby to mingle with patrons.  AMC strongly endorses this.  It works in other cities (e.g., Nashville) and takes away a bit of the informal stuffiness.  Now if only Maestro Spano would make himself a bit more available, as happens in other cities e.g.,(Pittsburgh, Nashville), the stuffiness quotient of the symphony-going experience might be reduced.  Why does that matter?  Barriers to attendance, including stuffiness, should be reduced- it might attract a new group of patrons who are uncomfortable with the distance between performer and audience often found in symphony concerts.

Although not directly related to the ASO, the Woodruff has place new video screens in the Atrium outside of Symphony Hall.  AMC thought these were a nice addition that appeals to the video-addicted.

There was a world premiere at the concert- Richard Prior's ..of shadows and light (Incantations for Orchestra).  Dr. Prior, from Emory University, has produced a stunning tone poem that is at times forbidding, and anxious, while at other jubilant and exuberant.  This is a piece that must find its way into the ASO's repertory, as well as that of other orchestra's. For program notes go here: http://www.atlantasymphony.org/~/media/Sites/ASO2011/ProgramResources/10-3-13PNA.ashx.  by the way, the ASO audience seemed to love the work.

AMC will be developing "A Conversation with Richard Prior" soon in order to discuss this piece in more detail.

The second piece of relatively new music is Adam Schoenberg's "American Symphony."  This was a work inspired by the election of 2008 and the composer's vision of the nation's striving to change, and one hopes, for the better.  Schoenberg is on of the members of the so-called "Atlanta School" that has been fostered by maestro Spano.  In general, works coming out of this group of composer's tends to listenable and accessible on first hearing.  That said, AMC found this symphony to be at times relentlessly upbeat with an occasional respite for all the hopefulness going on. The composer said that he was inspired by Copland's very important Third Symphony.  Overall AMC thought the work, at varying times, sounded like Copland, then Bernstein, then Ives (without the dissonance and stretched rhythms) and even Gershwin.  The Symphony requires a large orchestra, which at times, seemed mostly percussion.  For AMC, this American Symphony seemed derivative, which led to a great big feeling of "Meh."

Maestro Spano, one of the greatest advocates of young composers in the country today, interviewed both Prior and Shoenberg briefly.  These were shown as introductions to each work.  Again, this was a nice 21st Century approach in the concert hall.

The final work on the program was Rachmaninov's Second Piano Concerto, with soloist Garrick Ohlsson.  In other reviews AMC has discussed how this composer is great at creating great melodies and climactic bombast, but rather less successful in slower, quieter passages.  This was particularly underscored (pardon the pun) in this performance by Mr. Ohlsson.  The second introspective slow movement seems to meander- maybe the composer ran out of ideas and was struggling to keep the whole on track.  Ohlsson, and possibly Spano, decided on a tempo that was so slow, the work teetered on grinding to a halt.   Worse, Ohlsoon tends to linger on phrases that causes them to lose their punch in the wash of beautiful, but directionless, orchestral sounds.  Of course the ASO audience rose to its feet in the usual standing ovation, which encouraged Mr. Ohlsson to do an encore of Debussy's Claire de Lune.  This performance highlighted Mr. Ohlsson unique style.  It began so quietly that one patron near AMC said "I can't hear him."  Ohlsson went on to play the slowest rendition of this piece that AMC has ever heard.  He also included, which by this time, had become his signature for the evening, slow lingering over phrases.  The audience roared, which helped to wake AMC out of a torpor created by a slow and uninspiring performance.

Thanks to all of the benefactors, patrons, musicians, and volunteers that made this performance possible.