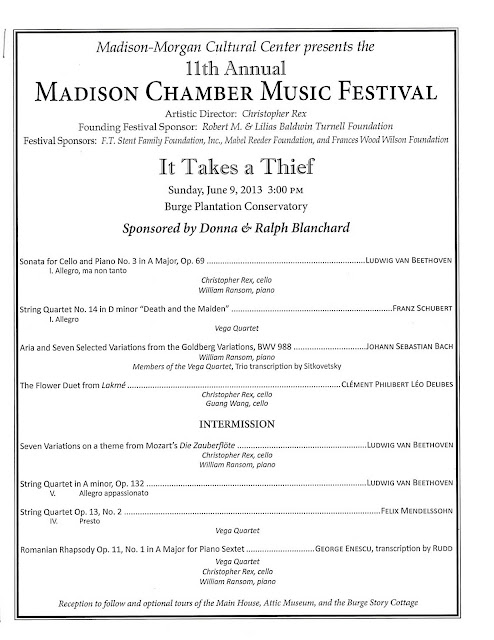 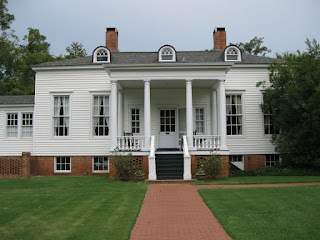 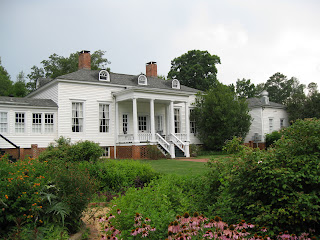 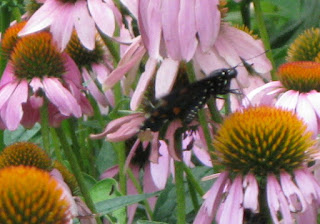 AMC attended the next-to-last concert in the 11th Annual Madison Chamber Music Festival.  It was held at the beautiful Burge Plantation in Mansfield, GA.  The concert was underwritten, in part, by Donna and Ralph Blanchard, who are charming and generous hosts.

The program was a pastiche of pieces played in various combinations by Christopher Rex, cell, William Ransom, piano, and the Vega String Quartet.  AMC generally does not hearing just portions of works but in this instance, it did seem to work.  It was appropriate entertainment for a warm, overcast Spring afternoon.  The theme of the program was "It Takes a Thief," wherein the various pieces were tied together (very loosely) by the notion that composers and performers steal from themselves and others.

The program began with the Third Sonata  for Cello and Piano by Beethoven.  Click here for a complete perfromance of this work by the legendary Glenn Gould: http://www.youtube.com/watch?v=vUpBCO4TYfM.  AMCV did not particularly like this music.  It is Beethoven at a fever pitch of Sturm und Drang.   It seems like it tries too hard to be revolutionary, including with a lot of aggressiveness.  Messrs Rex and Ransom were effective, but the acoustics in the Burge Conservatory shine a spotlight on the performers and any intonation issues are sort of in-your-face.

The next piece was the first movement of Schubert's "Death and the Maiden" String Quartet.  AMC is a big fan of Schubert's talent in creating beautiful melodies.  Sometimes his music can lurch from one section to another, and   is evident in this piece. Even the false finishes toward the end are example of this, but  the music is melodious and it was played handsomely by the Vegans.  Click here for the first movement: http://www.youtube.com/watch?v=XoZJkkWX8Yw

Following the Schubert was the transcenmembers of the Vega Quartet. the Vegans.  For AMC, Bach's music almost creates the same hypnotic effect that is created by the modern minimalists and it enables one to dissociate- not a bad thing every now and again.   The variations were original composed for harpsichord and were played here using a transcription for a string trio by Sitkovetsky.  See, a reference to thievery. click here for a sample: http://www.youtube.com/watch?v=VtfJ62FeF4o.  This performance was first rate and the integration among the instruments was quite nice, the ensemble was quite good, evn given the acoustical focus of the room.

The first half concluded with a transcription of Delibes gorgeous Flower Duet from Lakme.  This is a thrice familiar work, but never seems to lose its glory, at least for AMC.  Mr. Rex, and Vegan cellist Guang Wang were featured.  Click here for a somewhat similar version: http://www.youtube.com/watch?v=r1EKCpGJ_6Q.  The playing here was beautiful, with each cellist making his instrument sing.  Mr. Wang particularly has a big rich tone.

The Beethoven Variations from Mozart's "Magic Flute" followed the intermission played by Rex and Ransom.  Then came Beethoven's beautiful Allegro appassionato movement from his String quartet in A minor, played by the Vega quartet.   This was followed by the fourth movement of the String Quartet No. 2 by Mendelssohn.   AMC is somewhat baffled by the recent downturn in popularity of Mendelssohn.  His music is melodic seemed to presage the work of later romantic composers.  Nevertheless, the Vega players showed their real strength in these two pieces. They blended very well  and played with such force that it is easy to see that they are not just technically gifted, but also very musically insightful.  Also nature cooperated with a wonderful rain shower, highlighted with peaks of sunlight, while the quartet was playing.  Timing, and location, are everything. 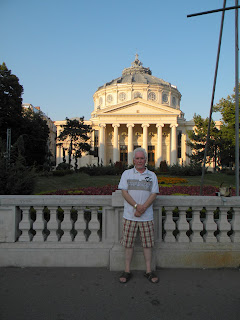 The photo is of AMC in front of the Enescu concert hall in Bucharest.

The entire program concluded with a performance of a rousing transcription of Enescu's Romanian Rhapsody No 1.  Rex, Ransom, and the Vega Quartet seemed to have a jolly good time playing this colorful music.  AMC visited Romania a few years ago and remembers the pride that Romanians feel of their home town boy.  Everything was spot on in this performance, with all of the players seemingly  investing every ounce of their collective concentration on making this a piece to remember. They reached their goal.  Special recognition should go to first violin Domenic Salerni, who played with vigor, great technical skill, and a warm tone.  He also seemed to enjoy the music as much as the audience.  Click here for the orchestral version of the Rhapsody: http://www.youtube.com/watch?v=BbEM77uO4xA

This was a thoroughly enjoyable concert in a beautiful plantation setting.  What' not to like?  The event was sold out, which in today's classical music market, is quite a nice tribute.

AMC wants to thank all of the benefactors, musicians, patrons, and volunteers that made this program possible.