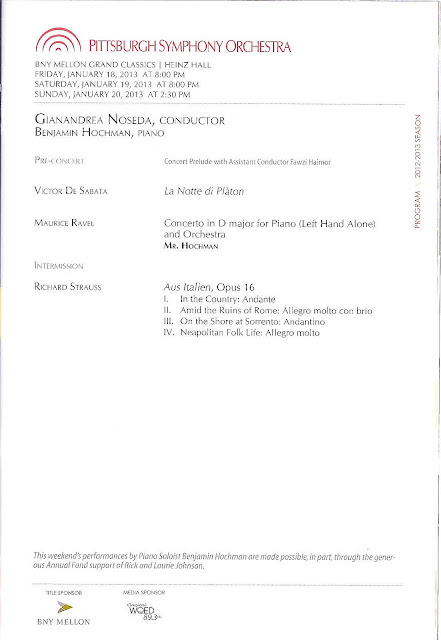 The Pittsburgh Symphony Orchestra presented a concert featuring works loosely tied to Italy, in part, reflecting the participation  of Gianandrea Noseda, the Victor de Sabata Guest Conductor of the PSA.
The De Sabata "La Notte di Platon" (Plato's night) is a rarely played work that is lush, romantic, and, at times, exciting.  The Ravel Concerto for the Left Hand featured soloist Benjamin Hochman.  This work is fairly short but full of fresh ideas for the time it was composed, and it is a showpiece for the soloist.  The final work is a symphonic poem by Richard Strauss titled "Aus Italien."  It too is rarely heard and is best described as a travelogue about Italy.  It is one of Strauss' weaker works, which may explain why it is rarely heard.

Every time I hear the PSO I am startled by its precision.  Each section plays as if it were one instrument.  Such technical ability is certainly to be admired. At the conclusion of the Strauss work, there is a single loud chord.  To hear it be played so precisely was a treat.  I like not having to cringe at intonation issues in the French horns.  In fact, their ability to play very pianissimo is incredible.  I like the European seating of the orchestra- it provides an opportunity for the cellos to be clearly heard and the lower strings to be highlighted.   It also provides an opportunity to hear some of the interplay between the first and second violins.

Maestro Noseda addressed the audience before the concert, especially reminding patrons that Victor de Sabata was very important in PSO history because he was a guest conductor in the late 1940's who helped bridge the time between Fritz Reiner and William Steinberg.  Noseda also described the PSO as one of the great orchestras of the world.  He is a very tall man who is charming and confident.  When he conducts, he does so with vigor.  He becomes so involved in the music he can be heard humming, probably in spite of himself.  His arms are long and he sometimes appears to have them hovering over the orchestra.  When I last saw him with the PSO I wrote about how good he was.  He has only gotten better and the PSO is wise to have him be a special guest conductor.

I like having the conductor address the audience briefly.  It seems odd that so many conductors just amble on the stage, turn their backs to the audience, conduct, bow, and walk off.  A bit of conversation with the audience humanizes and de-formalizes the sometimes stuffy concert experience.

Mr. Hochman played well, with a large tone, even with using only his left hand.  The Ravel came off as cool and sophisticated music, which is appropriate since it is cool and sophisticated music.
Attending a concert at Heinz Hall is a special event.  The auditorium has great acoustics, and the hall is beautiful.  The ushers are dressed in tuxedos and the audience is generally well-dressed.  The audience seems to encompass a broader age range than I have seen elsewhere, except maybe in Vienna.

I do have a few quibbles.  The first is that since there is such grand sound coupling between the orchestra shell and the auditorium, the musicians'  pre-performance tuning and rehearsal is rather loud and cacophonous.  European orchestras have it right- walk on stage after the audience is seated, tune a bit, and then get ready to play.  It's much easier on the ears.  The second is that Concertmaster Noah Bendix-Balgley has a big, big sound.  At times, I could hear his instrument over those of his colleagues.   It may have been where I was sitting but I found it introduced a bit of incohesion in the first violins.

This was a great concert with a great orchestra.  Even if the program was what some might consider very traditional, it showcased the talents of the wonderful Pittsburgh Symphony.

By the way, its 2013 European tour was recently announced. It is one of the few American orchestras that is able to do such touring and one of the few that the Europeans seem to want to hear!

Thanks to all of the benefactors, patrons, musicians, and volunteers that made this concert possible.