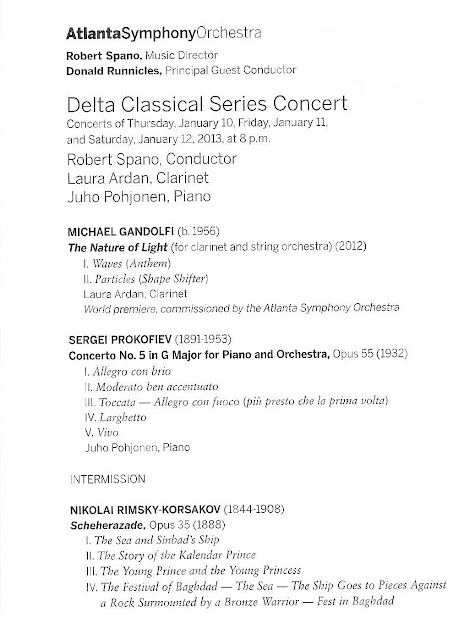 It was nice to see and the Atlanta Symphony Orchestra performing again after the very long holiday season.  I suspect that the ASO, like other symphony orchestras across the country, will be performing more holiday and Pops concerts, since they seem to fill seats.

This concert was notable for providing the world premiere of Michael Gandolfi's "The Nature of Light," a piece for clarinet soloist and orchestra.  Laura Ardan, the ASO principal clarinet was the soloist. ASO Music Director  Robert Spano has accumulated several composers who are referred to as the Atlanta School of composers.   Spano's goal, other than supporting the composition and performance of new music, seems to encourage the development of music that is accessible, readily understandable, sometimes melodic, and designed not to drive patrons from the auditorium.  Gandolfi's new work seems to meet all of these criteria.  It is divided into two parts, the first titled "The Nature of Light" and the second titled "Particles (Shape Shifter)."  The first was much like a baroque chaconne with definite Coplandesque references.  The main theme first appears in the strings, which are then paralleled by the clarinet.  Everything seems fairly tame, until the strings began to unwind both rhythmically and harmonically.  This is where the piece becomes more creative.  The second movement seemed almost like a retelling of one of Bartok's Hungarian Dances.  I doubt that this musical reference was intended, but I continually heard Bartok in Gandolfi's music.  Ms. Ardan performed admirably.  She is one of the ASO's super star artists and never fails to perform solidly and with flair.  There was not a squeak or intonation problem throughout her performance.   I suspect that "The Nature of Light" will find its way onto many programs because it is easy-on-the-ears.  Nothing wrong with that!  The audience gave numerous curtain calls for this performance.

The Prokofiev Fifth Piano concerto is a rarely heard piece that was receiving its Atlanta debut in this concert series.  The soloist was the young  Finn Juho Pohjonen.  According to the program notes (and I assume his agent) Mr. Pohjonen is one of his country's "...most intriguing and talented pianists and his interpretations are known for their intensity, thoughtfulness and fearless musical conviction."  I love these descriptions, but in this case it the hyperbole is on target.  Mr. Pohjonen was virtuosic with no hint of timidity.  The piece itself is truly beautiful.  It shows Prokofiev as both upbeat and somewhat mystical or mysterious.  It's not the most memorable of the composer's works, but in every way it demonstrates his ability to write a piece that is a 20th century piece that does not turn its back on the 19th.  Again, the audience went right to its collective feet at the conclusion of the performance and it was well deserved.

The final work was Rimsky-Korsakov's symphonic poem "Scheherazade."  I have great fondness for this work since it was the very first piece of classical music that I was introduced to.  I also remember it being played by the Philadelphia Orchestra under Eugence Ormandy.  I remember the lush strings and the lavish percussion from that Philadelphia performance.  The ASO acquitted itself beautifully in this performance and Maestro Spano kept it from being just another Pops warhorse.  Concertmaster David Coucheron played his solos with passion and technical wizardry.  The bassoons were outstanding, as were the brass.  The French horns had their usual intonation and dynamic issues- sometimes they were just too loud.  The strings were wonderful, but lacked the polish of the Philadelphia strings, in part, because of the ASO having a smaller string section.   But this was a grand performance and the audience again leapt to its feet to give thanks to the ASO for a job well-done.

Thanks to all of the benefactors, patrons, musicians, and volunteers that made this performance possible.
at 3:17 PM