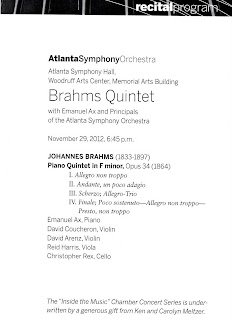 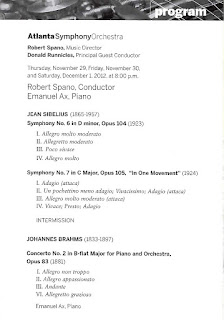 The ASO program this week began with a special recital featuring the Brahms Quintet.  It would be difficult to find a composition that has a more compelling melody than that found at the beginning of the second movement of the quintet.  It was wonderful to have Emanuel Ax playing the piano with principals of the ASO.  The players were rear facing, so that some audience members could be on stage to share a bit more of an intimate setting with the players.  This arrangement actually added to the reverberation in the hall itself, making for a pleasant, if somewhat muted effect.  Maybe it was the seating arrangement, but I heard a few bloopers from Mr. Ax.  Thanks to Mr. and Mrs. Melzer for underwriting the cost of this recital.

The actual program included two symphonies of Sibelius.  I am not quite sure why someone would want a double dose of the bleak Finnish landscape in just one evening, but that is what happened.  I like the Sibelius symphonies, one-at-a-time, but not two on the same evening.  In this doubling up, one can begin to see the similarity in Sibelius' compositional style, which would be the case for nearly any composer, I suppose.  It brings to mind Stravinsky's opinion of Vivaldi, that is, rather than writing 400 concertos, Vivaldi wrote one concerto four hundred times.  Maestro Spano obviously seems to like this music and he is at least able to keep it moving forward so that is doesn't collapse under its own weight.  The orchestra played beautifully with a few intonation problems in the horns.

The Brahms Second Piano Concerto is a staple of the programming of American orchestras.  It is beautiful if a bit too familiar.  Mr. Ax can probably play the concerto is his sleep, as could the ASO also.  It was a tidy performance with the business-as-usual horn flubs.  I was surprised that Mr. Ax also had a few performance issues, so maybe it wasn't the seating arrangement that was the culprit in the Quintet.  He does, however, have a friendly stage presence that makes me think he is unassuming and quite charming.  When I saw him in Lincoln, NE in September he also exuded that friendly quality.  He was spectacular there in a solo performance.

I would so love to hear some Scandinavian composers other than Sibelius.  What about Atterburg? Berwald? Nielsen?  These are safe composers who should not frighten patrons away, or maybe they just frighten away music directors.

Thanks to all of the benefactors who helped underwrite this performance.
at 3:31 PM