The Omaha Symphony presented a concert titled “Beethoven 1- 2- 3” that included the Leonore Overture No. 1, the Piano concerto No. 2, and the Symphony No. 3 “Eroica.” Thomas Wilkins conducted and Adam Golka was the piano soloist. Thanks to all of the benefactors who helped underwrite the cost of this concert.

As I have rhapsodized before, the Holland Performing Arts Center in Omaha has a sublime acoustical environment.  It may be one of the best I have even been in.  It is warm and reverberant and has few acoustical bugaboos such as large balcony overhangs.  But it comes with a price- more about that later.

Beethoven is known for the storm and stress in his music.  It is forceful, biting, and it does not shy away from confronting the listener.  In the Lenore, the OS strings were silky and smooth.  But they were overwhelmed when confronted by the brass.  For some reason, Maestro Wilkins has the trumpets sit above the rest of the orchestra and it tends to exaggerate their presence.  The hall is so fine that when a motif moves across the orchestra it is easy to follow, not just visually, but aurally as well.  This hall also spotlights the bass section.  The basses are crystal clear and they provide a firm footing for the music.  There were a few intonation problems with the horns but it could have been due to warming up. All in all, this was a satisfactory performance. 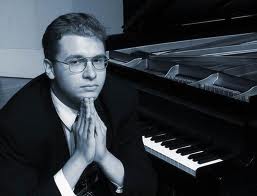 Adam Golka, who the New York times said has ..."brilliant technique
and real emotional depth."  Can we vote on this?

The same could not be said of the Piano Concerto.  Again, the smoothness of the strings made them seem like butter when steel was actually required.  Their pizzicati in the third movement were very polite.  Soloist Goklka also had problems making a big sound with his instrument.  His Beethoven was a milquetoast.  In addition, his left and right hands could not seem to agree as to which was in charge in the credenzas.  At times accompaniment notes were louder than the themes and he had a few missed keys.  There was no sturm here, nor any drang.  But the woodwinds and the horns were magnificent.

The Third Symphony looms large in the repertory.  This was a solid performance.  Again the woodwinds were wonderful.  Maria Harding, Principal Flutist, was especially fine; she is both technically good and manages to produce a mellow and warm tone.  The horns, which are so important in this work, were precise in their intonation and ensemble.  They rival, and maybe surpass, what I normally hear in Atlanta, where the horns are the orchestra’s weakest link.  Maestro Wilkins let the long second movement drag a bit; he seemed to pay too much attention to the detail and not enough to the forward movement of this somber music.

Now to the violins- throughout this performance they seemed to lack bite.  They never lean into attacks and, as a result, they lack the necessary gravitas to address the Beethoven’s music adequately.  I think that in order to meet the needs of this and other music,  they must fight against the warmth of the Holland by exaggerating  their bowing and digging into the strings when needed.  Currently their timidity is exacerbated by the warm acoustic.

Maestro Wilkins is a warm and charismatic person.  He addresses the audience from time to time, which I find thoroughly enjoyable.  There is nothing like a bit of banter to make an artist more human.  He talked about the sad financial state of many orchestras across the country.  He noted that some were even in the top ranks of classical ensembles (could he have been referring to the Atlanta Symphony?).  He concluded by saying that bad financial times are “not in his city.”  His pride was evident in the community support the OS receives and the audience showed its appreciation.

The OS program booklet is a really nice glossy publication that presents all of the concerts and program notes for the remainder of this year.   Of note, the OS is planning a two night Dvorak Festival in January.  The symphony will also have a chamber series in the Witherspoon auditorium of the Joslyn Art Museum.  When seen altogether, it is apparent that the OS performs a very full schedule throughout the Eastern Nebraska- Western Iowa region.  Both the organization and the community deserve kudos to how they enliven the cultural life of Mid-America.