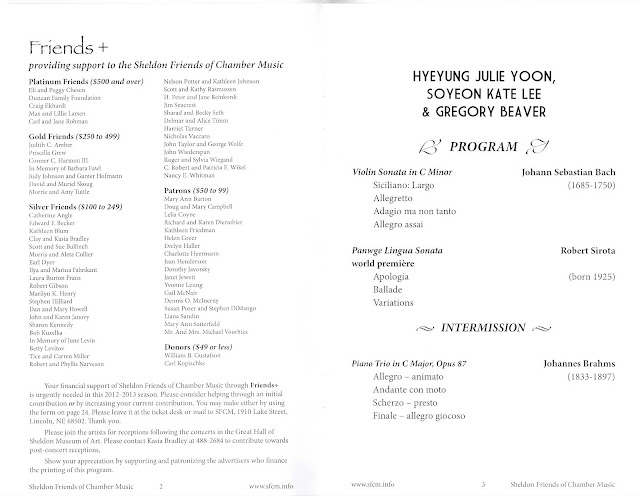 The Sheldon Friends of Chamber Music in Lincoln, NE presented a program featuring Hyeyung Julie Yoon, Soyeon Kate Lee and Gregory Beaver.  The concert was held in the auditorium of the Philip Johnson-designed Sheldon Memorial Art Gallery on the University of Nebraska-Lincoln Campus.  Thanks to all of the benefactors who helped underwrite the cost of this performance.

The Bach Sonata for Violin and Piano has a slow-fast-low-fast structure.  The program notes supplied indicated that the “text is made particularly clear by the inclusion of a cello which doubles the left hand of the piano” except there was no cello!  The stage placement of the two players made it impossible for the two musicians to actually see each other.  Maybe they have played the piece so much that visual cues were not necessary, but is reminded me of two children involved in parallel play- they are both playing but not interacting.  Ms. Yoon played with a broad vibrato that seemed to detract from the precision of her playing and it led to some intonation problems.  Her instrument, identified as a Roman violin from 1790 made by Giulio Ceare Gigli, does not have a particularly warm sound so maybe she was attempting to compensate.  The final section, Allego assai, has some treacherously fast passages that challenge any players’ skills, and so it also did for Ms. Yoon.  Ms. Lee played with great skill and authenticity.  She was idiomatic and is technically gifted.

Robert Sirota’s “Pange Lingua” was given it world premiere at this concert.  Mr. Sirota gave the pre-concert lecture also.  He is a charming and gifted educator who manages to entertain and teach at the same time.  This work was commissioned by Ms. Yoon in memory of her grandfather.  The work is based on a medieval hymn celebrating the Holy Eucharist.  The work is in three parts- Apologia, Ballade and Variations.  The piece moves from the aggressive to the reflective.  The first movement is at times strident and at times “in-your-face.” The second movement is more lyrical, with some passages that are a bit Debussy like.   The first two movements present fragments of the theme from the hymn and only in the last movement is the theme fully presented. Ms. Yoon and Ms. Lee played admirably.   Mr. Sirota’s work is not just a retelling of the tale, it is a creative take on it, and is worth repeated hearing.

Brahms’ music is uniformly melodic and romantic.  He was a master a taking a few notes and developing them into an entire movement through development and structure.  He took the best of earlier musical structures and combined them with intense beautiful lyricism.  His Piano Trio in C Major is no exception.  It is a gorgeous piece full of passion, and yearning.  Its intensity is like the musical equivalent of a romantic swoon.  Mr. Beaver joined Ms. Yoon and Ms. Lee for this performance.  They seemed really comfortable in playing this wonderful music.  Ms. Lee’s face mirrors the music and it is apparent that performing it brings her great joy.  Mr. Beaver was outstanding.  He has a full rich tone and he is skillful in the full range of dynamics required in this piece.  He visually checks in with the other members of the group, which adds to the cohesion of the performance.  This is less true for Ms. Yoon and Ms. Lee.  Mr. Beaver is technically skilled and a real standout in this concert.

This was a rewarding concert in a sympathetic acoustic space. The auditorium has about 300 seats and it seemed to be nearly full.  The average age of the patrons was likely in the late fifties.  There were but a handful of people younger than 30.  This is a troubling trend, and not unique to Lincoln, but in some ways even more noticeable in this crowd.  Maybe the younger audience was drawn to Frankie Valli and The Four Seasons performing at the nearby Lied Center.  But I doubt it since that audience would also trend older.  Many express concern about the graying of the audiences for classical music and we have few answers.  Many organizations are stepping into the schools to attempt to provide music education that has been lost to budget cuts and to create a future audience.  I hope this helps, but as our culture becomes less Euro-centric, the future of classical music may be bleak.

Just a note- the cover of the program was screen print by Josef Albers titled “Formulation Articulation I.  It was in gray scale and quite attractive.  The font used complemented the graphic nicely.
at 11:58 AM