Madison should be proud..... 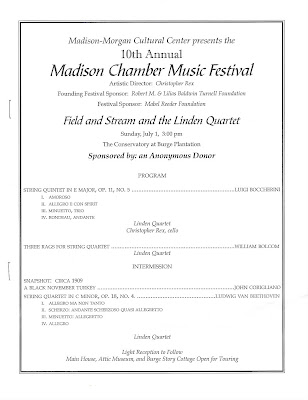 The Madison Chamber Music Festival presented a concert at the Burge Plantation in Mansfield GA.  (http://www.burgeplantation.com/).  This particular concert featured the Linden Quartet.  In the Boccherini, Christopher Rex joined the Quartet to make- guess what?- a quintet.  In the friendly acoustics of the Burge Conservatory, Boccherini's playfulness with thematic material was easily recognizable.  The third movement, the Minuetto, Trio, is one of those very recognizable melodies that somehow resides in the cultural collective consciousness.  I seem to remember it being used in a cigar commercial but I can't find any reference to it on the Web.  Notwithstanding this, the Minuetto was exquisitely played.  Only in the fourth movement of the Quintet did things go a bit awry.  there were intonation and bowing problems, especially in the cellos.  Maybe it was the oppressive heat outside.

The Corigiliano "Black November" piece bounced between the lyrical and the aggressive with a growl.  A Black November Turkey takes its title from a savage allegorical poem by Richard Wilbur (born March 1, 1921) is an American poet and literary translator. He was appointed the second Poet Laureate Consultant in Poetry to the Library of Congress in 1987, and twice received the Pulitzer Prize for Poetry, in 1957 and again in 1989.  The Web again failed to produce anything about the piece on which the composer drew inspiration, but Ms. Cosbey gave a bit of a back story having to do something about a chicken and a turkey soon to be a Thanksgiving feast.  This was not shy music but thoroughly enjoyable. The "Snapshot" piece is utterly, achingly, poignantly beautiful.  The composer drew inspiration from a photo of his father playing the violin accompanied by his Grandfather playing the guitar.  Eric Wong on the viola played the guitar-like accompaniment.  This was breathtaking music given a wonderful performance by the Lindeners.

Here is a snapshot of the Snapshot piece:

The Bolcom Rags were enjoyable.  The composer takes the form of the rags from the early 20th century and twists them a bit so that they are dissonant, sometimes harsh, humorous and always rhythmic and danceable. They are modern interpretations of a 100-year old style.  They are easily accessible and again they were played with perfection.

The Beethoven is one of his earlier works and reflects his experimentation with the structure that the form had taken in the hands of Haydn, for example.  The second movement is a scherzo built on a fugue, in contrast to the adagio that his predecessors used.  The fourth movement draws on gypsy themes and tests the mettle of the first violin, which seemed just fine for Sarah McElravy. This was another fine performance by the Linden Quartet.  These musicians really put their hearts and souls (and the souls of their shoes) into their performances.  This adds to the high caliber to their performances.

The Madison Chamber Music Festival, with Music Director Christopher Rex, came up with another outstanding concert.  It certainly was enhanced by the surroundings.  This concert also included an enjoyable reception with the musicians.


Thanks again to the donors who make this music available to us.