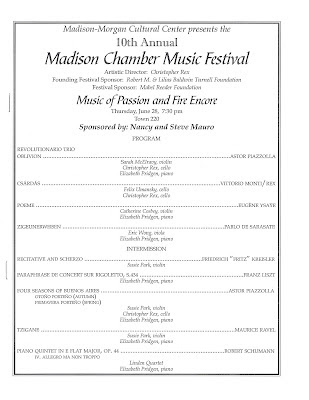 Yesterday was exceedingly hot- near 100 degrees F.  It was one of those days that made going outside unpleasant.  Even getting in the car was unbearable, since the air conditioning could barely handle the heat.  But I persevered and drove to beautiful and historic Madison, GA.  This pretty little town is about an hour and fifteen minutes from where I live.  So why did I go?  Well, I wanted to attend the "Music of Passion and Fire Encore" or the Madison Chamber Music Festival.  The concert was held in Town 222, a very nice restaurant with a small gallery with space for maybe five tables.  I was lucky enough to have one of them, with a perfect view of the small stage.  I had a great meal before the music started.  The concert was made up virtuosic showpieces for chamber ensembles and soloists (see the program above).  Artistic Director Christopher Rex from the Atlanta Symphony selected a light collection of bonbons that perfectly suited the hot weather.
The Piazzolla works were just enough to help me appreciate his tango-inspired music, without fatiguing me with the composer's sometimes slavishness to the form.  It's also interesting to note that three pieces were inspired by music of the gypsies or Roma (the Monti, Sarasate, and Ravel pieces).  It is interesting that a group of people who have endure so much prejudice and scorn have be the inspiration for many great composers. The Liszt piece is from his series of transcriptions of famous operas.  These were done so that those who did not have access to operatic performances could hear the music locally.  A standout work on the program was the Poeme of Ysaye. Eugène Ysaÿe ; 16 July 1858 – 12 May 1931) was a  Belgian violinist, composer and conductor born in Liège. He was regarded as "The King of the Violin", or, as Nathan Milstein put it, the "tzar". His brother was pianist and composer Théo Ysaÿe (1865–1918), and his great-grandson is Marc Ysaÿe, drummer of rock band Machiavel.  While admired in his lifetime, his music is heard infrequently today.  This particular Poeme is lush and romantic.  It is almost an elegy and it soars at times to great and heartfelt ecstasy.  The program concluded with the fourth movement of the Schumann piano quintet. This is a beautiful work from a composer who, for me, was better at composing chamber music than symphonic music.

Each performer was outstanding.  Kudos again to Rex for assembling them.  Four of the players were from the Linden Quartet (McElravy, violin; Umansky, cello; Cosbey, violin; and Wong, viola).  Individually each is on outstanding technician.  Ms. McElravy played with a warm and burnished tone.  Mr. Wong was an outstanding performer who has mastered his instrument.  He also has a nice stage presence and handled the horn of a passing time with humor.  Ms. Cosbey's performance of the  Ysaye was flawless.  She handled the retuning of the G String to D with considerable skill.  A solo violinist, Ms. Park, played the Kreisler and Ravel.  The former is full of double-stops that she played beautifully.  She also showed that she did not lack technical skill in the devilishly difficult Tzigane.  Playing the piano was Elizabeth Pridgen who is familiar to patrons of the Georgian Chamber Players.  She is a solid performer who attends to dynamics of a piece and is masterful at working with others in terms of volume and tempo.  Christopher Rex is always a total professional, full of passion and technical skill.

The Monti piece, Csardas, was interesting because Mr. Rex had arranged for an ASO performance where he played the piece with Yo Yo Ma as an encore.   This was the only piece on the program that didn't seem up to the level of the others.  Both cellist seemed to have intonation and bowing problems.
This concert was an example of having a performance setting that was relaxed and "starch-less."  Seating was comfortable and there is something nice about having an iced tea while listening to wonderful music.  This should be done more often.  This was a great contrast to the somewhat stodgy setting of the North Georgia Festival, i.e., a dark, rather old university recital hall. Also, as the darkness approached, the LED lights on the music stands became increasingly visible.  They looked like fireflies circling the music.  It was a nice, if slight, touch.

The Atlanta area is fortunate to have two chamber music festivals within easy driving distance.  Both help bridge the gap between the traditional fall and spring classical music seasons.

It occurs to me that those of us who are patrons of these events should be grateful to those who provide support to make it all possible.  As a result, I have included a list of the sponsors of this Chamber Music Festival.  Special thanks should also to Nancy and Steve Mauro for their support of the evening.
The next concert of this series is on July 1 at the Conservatory at the Historic Burge Plantation.  I understand that is it sold out.  To see the website of the festival, go to www.mmc-arts.org. 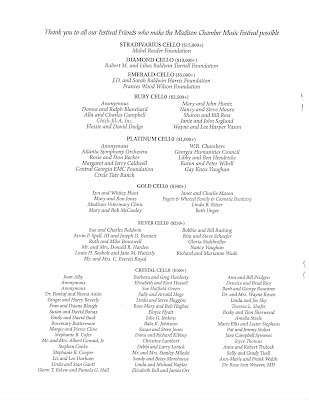