The Christmas season fills church pews and concert hall seats.  Even if one is not religious nor a fan of classical music, attending church and a concert seems a reasonable leap, once a year, without a great investment of time or attention.  And in the concert hall, most symphony orchestras play familiar, pretty music that requires minimal attention or understanding.

In Lincoln, NE, the eight voices of Dulces Voces mounted a holiday program title “Nowell,” with guest performers the Lincoln Early Music Consort (LEMC) .  The concert, held at Holy Trinity Episcopal Church, was well-attended- there may have been upwards of 250 people in the audience.  Yet, with the exception of four sing-along pieces, sprinkled throughout the program, most of the music was unfamiliar, dating as early as 1521.  In fact, there were 25 works on the program and most were relatively short, with the longest being approximately 10 or 11 minutes.  The program was designed to provide  a set by  of songs by Dulces Voces, alternating with a set from the LEMC, followed by a set with both, and then a  short set of familiar Christmas Carols that the audience was invited to sing.

The Dulces Voces are quite accomplished singers who blend nicely, although there was a slight tendency for the tenors to be prominent, which may have been a function of my seating location.

Tenor Jon Gathje was featured in the work Nowell We Sing (anonymous 15th Century)  His voice was startlingly clean and rich and would have been at home in a medieval church chanting plainsong. The acoustics of Holy Trinity is not cathedral-like but warm and hospitable.  The group also presented the world premiere performance of Nicholas Lemme’s 2017 A solis ortus cardine (Latin for “From the pivot of the Sun’s Rising”- a poem from the fifth century by Coelius Sedulius).  Lemme is a Lincoln-based composer of choral music and he is also Professor of Music at Our Lady of Guadalupe Seminary in nearby Denton Nebraska (a beautiful Romanesque Revival facility located a hilltop with a commanding view of the countryside).  Solis seemed right at home with the music from 400-uears ago.  It was indeed anachronistic, but no less beautiful.

The LEMC performs with period (or period appropriate instruments) that have a warm timbre, and which are prone to be difficult to tune and stay-in-tune.  It’s an auditory joy to hear the golden sound of the wooden wind instruments, such as the recorder.  The LEMC uses a variety of viols that are equally mellow sounding.  The krummhorn was featured in La Volente (Pierre Attaingnant from around the mid 1500’s).  The horn’s kazoo-like sound rattles and buzzes, and is thoroughly enjoyable, at least of a while! Baritone Michael Tully join the LEMC for two songs.  Tully graduated from the University of Nebraska-Lincoln in 2013 and has performed across musical genres.  His voice is rich and strong; his intonation and articulation are wonderful.

The Voces sang an encore of “Thistlehair the Christmas Bear.”  It ended the evening on a humorous note and was just right for the children in the audience.

This was an enjoyable holiday program that for the great majority of it gave the audience an opportunity to hear centuries’ old music.  That, in itself, was a worthy accomplishment. 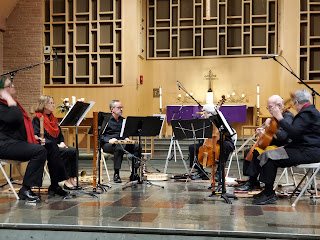 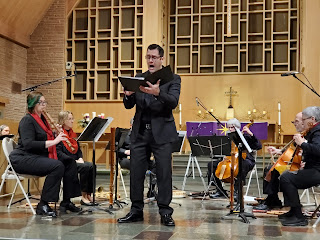 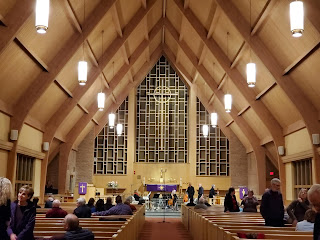 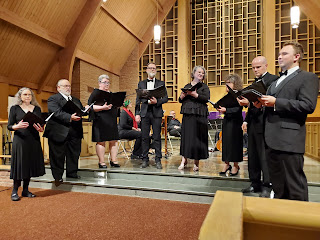