The Pittsburgh New Music Ensemble (PNME) summer season is a wonderful mashup of new music combined with theatrical flourishes.  PNME programs pieces usually played without break.  The concerts are held at Pittsburgh's City Theater near the gritty (and getting grittier all the time) Carson Street corridor.  The auditorium is in black-box style, with 254-seats.  Noe takes full advantage of the theater's lighting to add to the character of the music and PNME uses a fine sound system that is used to amplify the sound of the ensemble and to perform electronic compositions or accompaniment.

AMC attended a July 19 program titled "Got Reeds."  The soloist featured was Eric Jacobs, the Clarinet and Bass Clarinet of the Seattle Symphony, who is also a member of PNME.  The program began with a world premiere of a work by Gabriella Smith.  It featured Jacobs playing in an alcove that is about 10 to 15 feet above the stage.  This was followed by Anna Clyne's "Rapture," a clarinet solo accompanied by a pre-recorded electronic soundtrack of deep growls, swells and percussive effects.  Next was the premiere of Andrew Tholl's "takes all of the breath out of me." In this piece not only did Jacobs play his clarinets, he also sang the work's wonderfully sensual lyrics.  He has a mighty fine voice that demonstrated his interest and training as a singer.  There was also an electronic soundtrack that added to the drama.  This is a heartfelt work played with great passion by Jacobs.  The final work was David Lang's 1991 "Press Release" for bass clarinet.  It’s a work where the soloist plays both main themes and accent notes, almost as if the soloist is accompanying himself. Jacobs is a wonderful musician and he demonstrated both his musical and technical skills in this challenging program.

On July 21, the PNME concert was title "Eyes and Ears."  It featured works by three composers (David Biedenbender, Jung Yoon Wie, and Rufus Reid) who, in conjunction with the American Composer's Forum, have been commissioned to develop pieces for PNME for the 2018 season.  All works featured spotlighted art works by artists Scott Hunter (www.scothunterfineart.com; see especially the non-representational tab) and Val M. Cox (www.valmcox.com).  Cox had previously been commissioned to create a work in memory of David Stock, the founder of PNME. The program began with Biedenbender's "Red Vesper;" a trippy homage to the setting sun in National Parks of the Western US.  Rufus Reid's jazzy "Pangea" was next, featuring Reid himself on the bass. Next was Wie's "Jindo Blues,"- a sort of jazzy piano nocturne. Biedenbender's "Cold Hard Steel," another eminently likeable piece with outstanding surround sound effects, followed. The next piece was the world premiere of "Almanac" from composer Thomas Osborne, written for PNME Bass-Baritone Timothy Jones.  The work has the soloist singing somewhat anachronistic lyrics above a contemporary musical accompaniment.  The final work was David Garner's "Glasz" for Flute, Violin Piano, and Percussion.  It is a wispy yet energetic piece that's easy to like. Then  It is a startlingly good piece of music.

PNME and its Music Director Keven Noe never fail to present a compelling evening of music and theater.  Everything is enhanced by the lighting design of Andrew David Ostrowski and the sound design of Christopher McClumphy.  The City Theater setting also enhances the program; it is comfortable, just the right size, and flexible.  Apparently, Pittsburgh appreciates PNME, given the size of the audience.  The house was nearly full. Often with new music groups, there is a self-conscious need to be hip- a cool (but uncomfortable venue), really "out there" music, and taking start times as mere suggestions rather than commitments.   Much like all of Pittsburgh, PNME is hip and cool, but it is done effortlessly, almost invisibly.  It doesn't need to be world class, it just is. 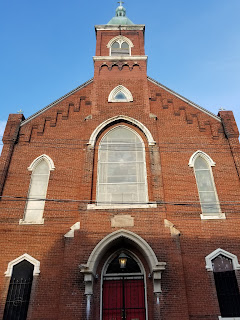 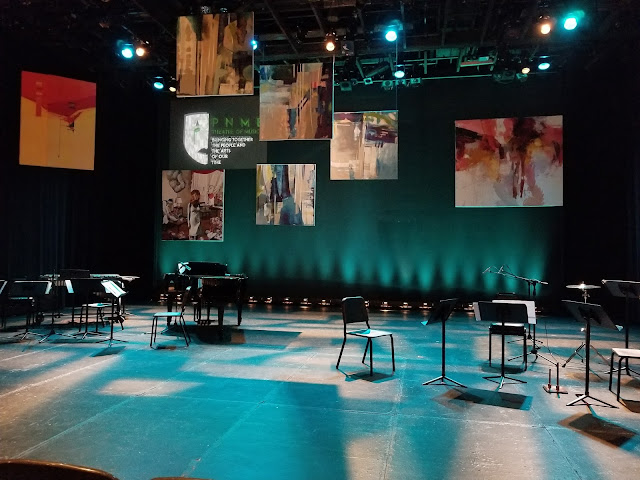 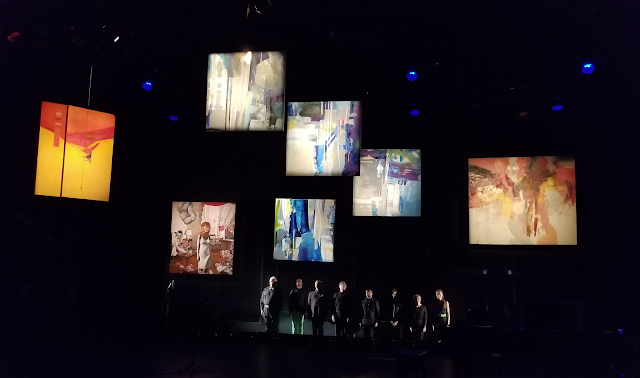 Email ThisBlogThis!Share to TwitterShare to FacebookShare to Pinterest
Labels: PNME