The Pittsburgh Symphony Orchestra (PSO) had the last of its summer concert series on July 23, 2016, titled "Classical Mixer."  The evening began at 6:00 pm in the Heinz Hall Garden, a beautiful urban oasis with waterfall and water sculpture. There was a cello trio playing transcriptions of popular and classical music in the Grand Lobby of the Hall itself and a woodwind trio (clarinet, oboe, and bassoon) playing in one of the upper level bars (a beautifu  Neo-Art Deco white room with wonderful lighting)..  The concert followed and the evening ended with a jazz band featuring members of the PSO, again in the Garden.  All of the events were well-attended by fashionable patrons of all demographics.  The attendance was quite good given that on the same evening there was a Pirates baseball game, a Pittsburgh New Music Ensemble concert, an Opera Theater of Pittsburgh performance, and a Texture Dance performance.

The concert itself featured works from the 2016-17 season, conducted by Assistant Conductor Andres Franco (see my interview with Maestro Franco here: https://www.youtube.com/watch?v=ffYf6IiMKJc . The concert was a Whitman's Sampler of  familiar and not-so-familiar works.  It began with Beethoven's Overture to Egmont, followed by a movement from Mozart's Symphony No. 38.  Both of these works were performed to perfection.  The strings of the PSO are astonishing if you have not heard them.  Precise in executive and golden in tone is the only way to describe them.  The next work was the third movement from Brahms Symphony No. 3.  This was a lush interpretation that turned the spotlight on the lower strings.  It was taken at a leisurely pace by Maestro Franco.  Next were two movements from Prokofiev's Symphony No. 1, followed by Bernstein's Candide overture.  The most interesting work on the program followed- James MacMillan's rich sounding "One."  It paints a dreamlike portrait of  Scotland.  Appropriately, it was introduced by Principal Flute Lorna McGhee, who lived not far from the composer in her native Scotland.  Next was the finale of Elgar's Enigma Variations, which cold have benefited from some organ pedal notes, but Heinz Hall unfortunately does not have an organ. The final work was Tchaikovsky's 1812 Overture, introduced by Russian-born cellist Mikhail Istomin, who is both charming and humorous.  Its difficult not to be swept up in the tension, brass, and percussion of the bombastic  "1812". Its over-the-top but great for a summer concert.   Heinz Hall also does not have canons so some hearty thwacks on the bass drum substituted for the artillery.  Kudos to the chime player who did a great job of substituting for the Russian Cathedral bells.  Several other PSO personnel also addressed the audience throughout the course of the evening.  Craig Knox, tuba player, was totally relaxed and funny in his remarks.  Maestro Franco kept everything moving along and on-track.  His version of the "1812" was a total crowd-pleaser.

This was a great way to spend a hot summer evening in Pittsburgh. This was a well-planned event that made the maximum use of the Heinz Hall facilities, while showing the wonderful playing and sound of the PSO.  AMC had an opportunity to talk with several orchestra members in the garden; it is apparent that they are proud to be part of the orchestra and o be part of its legacy.

AMC has included some photos of the event: 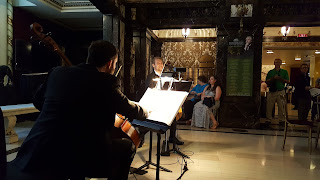 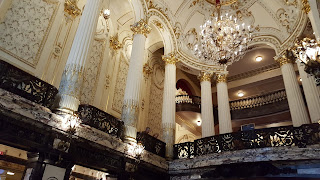 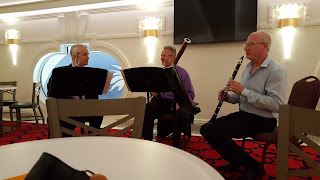 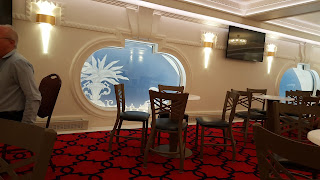 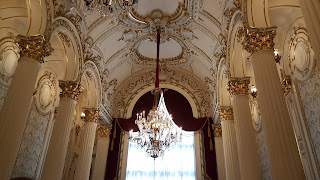 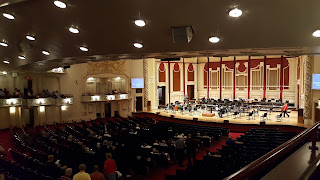 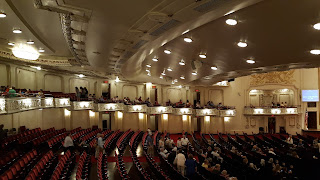 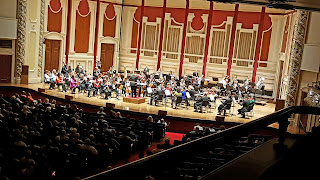 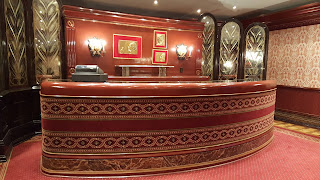 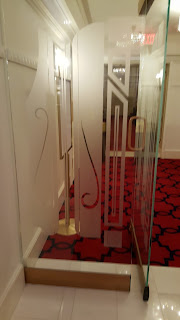 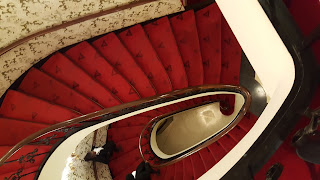