And now for something completely different... 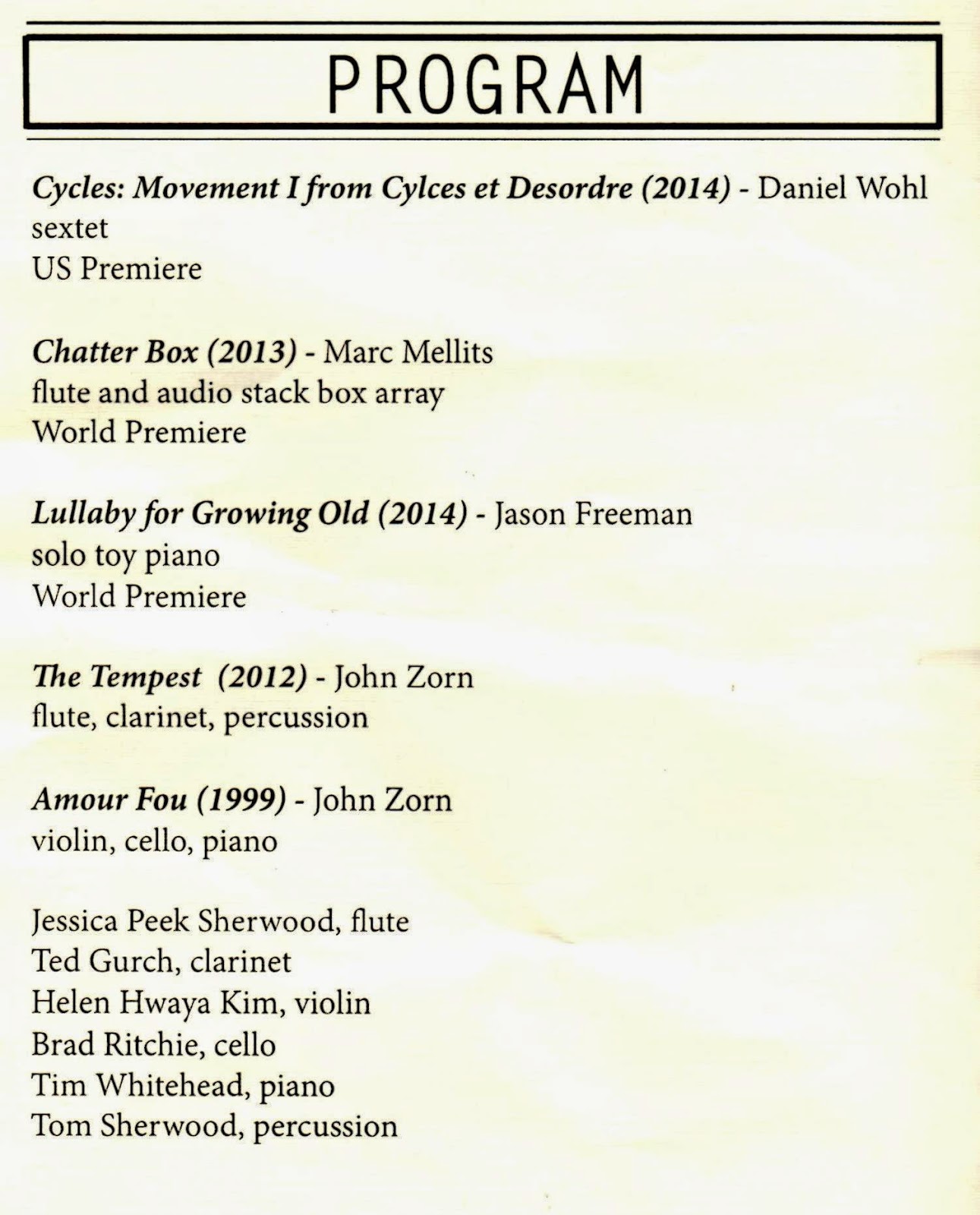 Sonic Generator, one of Atlanta's new music ensembles, presented a program at Erikson Clock, a satellite of The Goat Farm. The venue is a large gallery like space with lots of wood, so the acoustics are warm and not too reverberant, which generally suits the the type of music played by Sonic Generator, i.e., a bit hard edged.

The program began with Wohl's "Cycles: Movement I," which was receiving it US Premiere. Wikipedia say about Wohl that he is "... a Paris, France born composer based in Brooklyn, New York, known for seamlessly blending electronics with acoustic instruments." That seems a fair summary to AMC. The first part of the work sounds traditionally minimalist (traditionally minimalist?). At the risk of diminishing Mr. Wohl's effort, once could easily confuse this section as an early Philip Glass composition. The second section of the work may be best described a layers of sound underneath which is the ever-churning minimalist fillagree. This was a very agreeable work for AMC. The entire piece will be premiered next season in a program featuring Sonic Generator and GloATL.


Heere is a stunning video of Wohl's "Corpus," which doesn't sound a lot like "Cycles" but worth a look anyway:

The second piece featured a relatively new device call "an audio stack box array."  This instrument employs small cubes that contained micro-chips that have resident on them notes/rhythms.  They can be combined- added to and subtracted from- to provide a muical line.  In this case the array was accompanied by a flute, (or the flute was accompanied by the array, which might be a distinction without a difference!) skillfully played by Jessica Peek Sherwood. AMC found the work appealing and accessible but AMC is not certain that it was because of the gimmickry of the devices or because of the musical merit.  Maybe it doesn't matter.

The next piece was by Jason Freeman, played on a solo toy piano, played by Tim Whitehead.  It was a touching piece, especially given the composer's background on the piece.   Here is a recording of the live performance:


The final two works on the program were by John Zorn.  "The Tempest" featured the very talented Tom Sherwood on percussion as well as Jessica Peek Sherwood on Flute and Ted Gurch on percussion. This is an improvisatory character to this work and the bass drum (struck and otherwise manhandled) by Mr. Sherwood)  fit with the thunderstorm going on outside.

the final work was Zorn's "Amoir Fou."  this overly long work seemed replete with effects on the strings of the violin and cello that raised the hair on AMC's arms, and that wasn't a good thing.  there were some clever chord hand-offs from the piano to cello, and frequent string harmonics throughout the piece that were played effectively by Helen Hwaya Kim (violin) and Brad Ritchie (cello).  AMC did not particularly like either Zorn piece.  The "Amour" piece just seemed to try too hard to insert new ways of making stringed instruments sound different.

Here is a video of another performance of  "Amour Fou":


This performance does not seem to highlight the shrillness of the strings quite as much as the Sonic Generator performance.  That's not a knock on the latter's effort- it could be a function of recording technique, performance venues, etc.  Notwithstanding these caveats, AMC still is not enamored of the work.

Thanks to all of the musicians, benefactors, patrons, and volunteers that made this performance possible.