Superstar- that's what you are.... 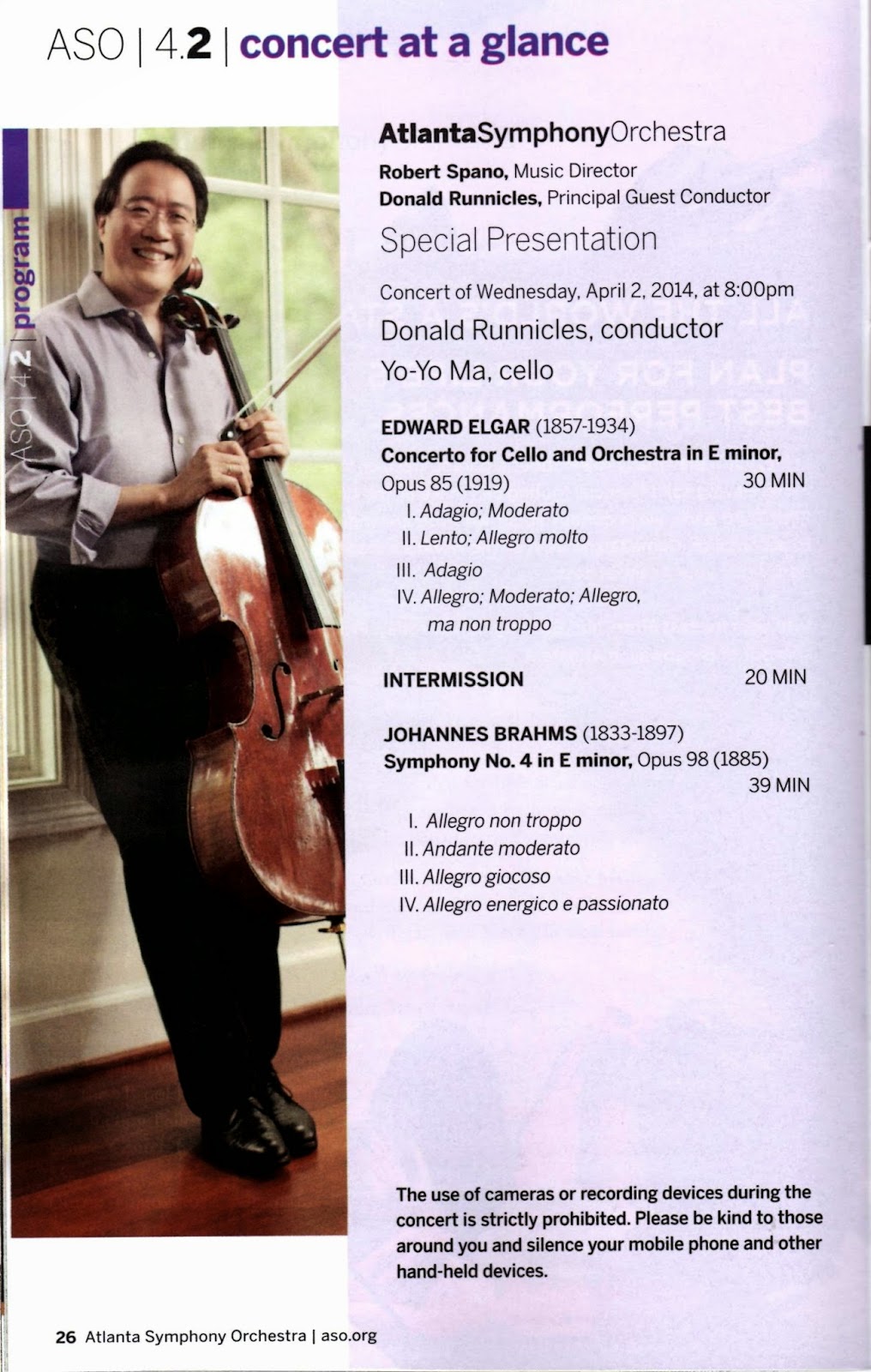 The Atlanta Symphony Orchestra, directed by principal Guest Conductor Donald Runnicles hosted cellist Yo Yo Ma. Mr. Ma is one of the superstars of classical music.  He has one of the busiest touring schedules and solos with many major and not so major orchestras in the US.  He fills concert halls as he did last night in Atlanta's Symphony Hall. He does for symphony orchestras what the annual "Nutcracker" does for most US-based ballet companies- he helps keep them afloat.    And to quote Daniel Tosh, "And for that, we thank you."

The concert was actually in reverse order from that displayed in the program.  The Brahms Fourth is one of the towering achievements in the symphonic literature.  It is full of gorgeous melodies, intricate construction, warm and think sororities.  Come to think of it, the same can be said of the Master's first three symphonies also- although AMC is partial to the second.   The ASO played beautifully.  Maestro Runnicles has been guest conducting in Pittsburgh and Philadelphia, where he received tepid reviews.  AMC didn't quite expect such lukewarm reviews given that when he conducts in Atlanta, he seems to energize the ASO.  It could be that Runnicles have developed a strong relationship over the years that leads to better performances here.  It could be that nearly anyone would suffer in comparison to Pittsburgh's Manfred Honeck (check out the reviews for his most recent gig in New York)  and  Philadelphia's Yannick Nezet-Seguin .  AMC recently observed that Runnicles seemed to let the horns play too forte in the "Libestod."  AMC felt the same about the horns in  the Fourth Symphony.  In fact, some of the criticism from up north addressed Runnicles sometimes faulty balances. Still, this was a fine performance of such beautiful music that AMC is always a bit left wondering if a human could actually have composed it, but by all account, Brahms was indeed of this earth.

Unfortunately the audience applauded after each movement. What would Brahms have thought?  It irritated AMC.

Here is a version of this wonderful symphony conducted by Mariss Jansson s, former director of the Pittsburgh Symphony:


AMC must admit that this is a little too sinewy but admires that the Lucerne  ensemble has some fine looking people in it.  Check out the hair on the oboist.  It appears to be a youth orchestra.  At about 17:55 one of the players give a wonderful smile at the camera.  How nice!

Next on the program was the Elgar Cello concerto.  This is a work full of beautiful passages that by themselves are quite breathtaking but seem to lack an overarching structure.  If a listener closed his/her eyes, passages could be thought to have been from Frederick Delius- pretty and all, but not really substantial.  The work is unmistakably from a composer of the early twentieth century and in the English tradition-  all viola-y and too long.  Anyway Mr. Ma performed without a hitch, in his usual near-ecstatic flamboyance.  The audience rose to its collective feet at the end- just like it does at every concert, although here it was deserved.  Mr. Ma performed two encores. The first was a duet with ASO principal-cellist Christopher Rex.  AMC had the name of the piece on the tip of the tongue, but it never got much beyond that.  Mr. Ma hugged Mr. Rex at the conclusion of the duet.  This performance, however, demonstrated why Yo Yo Ma is among the very best and touring the world over while Mr. Rex is a stalwart with the ASO.

Finally Mr. Ma played the prelude to Bach's Cello suite No. 1.  No one need ever why Bach is so highly regarded after listening to this piece.  It was impeccably played.  Here is a performance with Yo Yo Ma from YouTube:


Thanks to all of the musicians, benefactors, patrons, and volunteers that made this concert possible.

Email ThisBlogThis!Share to TwitterShare to FacebookShare to Pinterest
Labels: Donald Runnicles, Yo Yo Ma