AMC spent eight glorious days in Prague.  It was very different than expected.  It is not a sleepy little Eastern European city.  It is a bustling place with a sybaritic lifestyle.  AMC was a model of self restraint.

There are concerts galore in Prague- at nearly every major church- sometimes two or even three times a day.  Most present "Top 10" classical music and designed for the tourist crowd.  AMC attended a few of theses tourist concerts.  But more important AMC attended the Czech Philharmonic Orchestra and the State opera production of Tosca.  Let's begin:

The Czech Philharmonic plays at the Rudophinum Dvorak Hall (http://en.wikipedia.org/wiki/Rudolfinum). Maestro Manfred Honeck (the music director of the Pittsburgh Symphony) is Principal Guest Conductor of the CPO.  The program consisted entirely of the Verdi Requiem.  AMC has never really liked this work because it tends to be about an angry god and it seems to provide little comfort to the survivors.  In fact, when this worked was performed by the Atlanta Symphony, AMC was not a fan.  The Prague Philharmonic Choir was the featured choral group.  It seemed to have about 60 members who sat behind and above the orchestra in the hall's fairly small loft.  The smallish  Dvorak Hall seats only about 1400 so the challenge for Honeck was to have the choir sound large without overwhelming the orchestra. For AMC a good conductor is mindful of the acoustic space in which the performance is taking place in order that there is a successful melding of orchestra, soloist, and choir.  AMC has been very critical of choral performances with the Atlanta Symphony.  AMC has found the chorus to be too large and too loud, yet Atlanta is supposed to have a fine "choral tradition" as a result of the musical direction of the late Robert Shaw.  Recently, the ASO, under Principal Guest Conductor Donald Runnicles, performed several of Brahms choral works, including "Gesang der Parzen", Brahms' final  work for chorus and orchestra.  This may have been the worst concert AMC has ever heard in Atlanta.  The chorus was totally out of control- they sang as if they were in a shouting match.  It was more yelling than singing.  The fine ASO was drowned out by the voices.  (AMC is beginning to think that Runnicles has a major problem in controlling balances, not only between orchestra and chorus, but also within the orchestral playing itself). In fact, AMC talked with an orchestra member who also commented on the excessive volume of the chorus. So what does this have to do with the CPO performance?  Well just about everything.   Honeck knows how to build drama.  He walked onto the podium and then seems to be meditating or praying for maybe 45 to 60 seconds.  He raised his arms to begin, and out of the ambient noise of the hall, the music began to emerge with the most pianissimo sound one could ever hope to hear, especially when  150 to 200 performers are involved. The choir was under such wonderful control that they too managed to produce some incredible, nearly quiet sounds.  Yet, when required, the chorus reached a forte that was hair-raising, but never out of control or overpowering.  For AMC, this is the signature of a conductor who has carefully thought through the integration of a hall's acoustics, the size of the orchestra, the power of the human voices, and the written score.  This was a drama-filled performance, yet never tacky or tasteless.  Honeck is an active conductor, continually communicating to the orchestral about entrances and dynamics, as well as the beat.  But, make no mistake, he is no human metronome.  Honeck accomplished something that almost never happens in Atlanta, that is, he seamlessly integrates the horns with the rest of the orchestral sections.  They never stand out, yet their sound is present and warm.  Credit also goes to the CPO horn players for accomplishing this.  The soloists were also stand-outs.  The soprano, Ms. Schneider, and the Mezz,o Ms. Romberger had a similar warmth to their voices so the hand-off between them was very smooth.  Mr. Cernok, tenor, and Mr Relyea, bass, were also superb.  Mr. Relyea's voice was warm and rich.   As an aside, all four singers appeared to be genetically blessed in the look's department. Maestro Honeck also knows how to build drama at the end of a work.  His arms remained raised for what seemed like an eternity.  when hew lowered them, the audience went wild.  There were numerous curtain calls and Honeck graciously acknowledged the soloists and the sections of the orchestra.  The audience also showed its appreciation of Honeck with prolonged applause.  So did everyone deserve all of this adulation?  You bet.  This is how a choral and orchestral performance should sound.  The acoustics of the hall were superb.  Honeck chose to put trumpets in the balcony during the first sections of the Requiem.  Their rich sound was breathtaking- another indicator of superb acoustics.  The hall was totally full, with patrons of a wide range of ages, and all smartly dressed.  The seats, though, are brutally uncomfortable.  Nothing's perfect!

Maestro Honeck's star is on the rise.  His reviews across the US have been wonderful- one reviewer even asked the question after Honeck's New York Philharmonic debut- "Where has Manfred Honeck been all of our lives?" (http://www.concertonet.com/scripts/review.php?ID_review=8901). Where indeed?

AMC attended a performance of the State Opera's production of Puccini's "Tosca."  The State Opera Building interior is decorated in a red, white, and gold scheme, with heavy baroque ornamentation.  There is a gold cover for the stage, which, when lifted, shows a scrim with a modernist painting on it that seems straight out of a communist's dream, but that just may be AMC's fantasy.  The sound in the auditorium is quite good and the orchestra has a presence that is remarkable.  It is as if the orchestra sound is reflected into the auditorium by some overhead sound focusing device.  To AMC. "Tosca" has a rather weak story line.  It requires a lot of exposition to make it hand together, much like in "Star Trek" when Spock had to explain everything with some scientific-sounding stuff.  The sets for this production were mostly black, gray, and a ghostly sort of yellow.  The sets also used force-perspective that gave them an expressionist look.  The singers were quite good, with Jolana Fogasova providing a capable heroine.  Possibly as a combination of her ginger wig combined and  her light skin gave her a sort of Julianne Moore vibe.  Cavarodossi was played by Rafael Alvarez.  He was a bit shaky at first, but, when warmed up, did a credible job.  However, Mr. Alvarez needs to work on his stage kisses.  They looked so uncomfortable and fake that they were almost laughable.  The Te Deum scene in the cathedral looked really washed out, in part because everyone was wearing yellow vestments.  Ugh.  The chorus was competent but a bit thin.  The orchestra was first class. The conductor was Tomas Brauner.  AMC sat next to a charming woman from Los Angeles who was a real opera aficionado.  She said that her mother used to read to her the stories of the opera just before bed.  She asked the rhetorical question, "What was she thinking?!"  In sum, this was a good performance is a grand venue.  The theater was less than half full but it was a Thursday night. 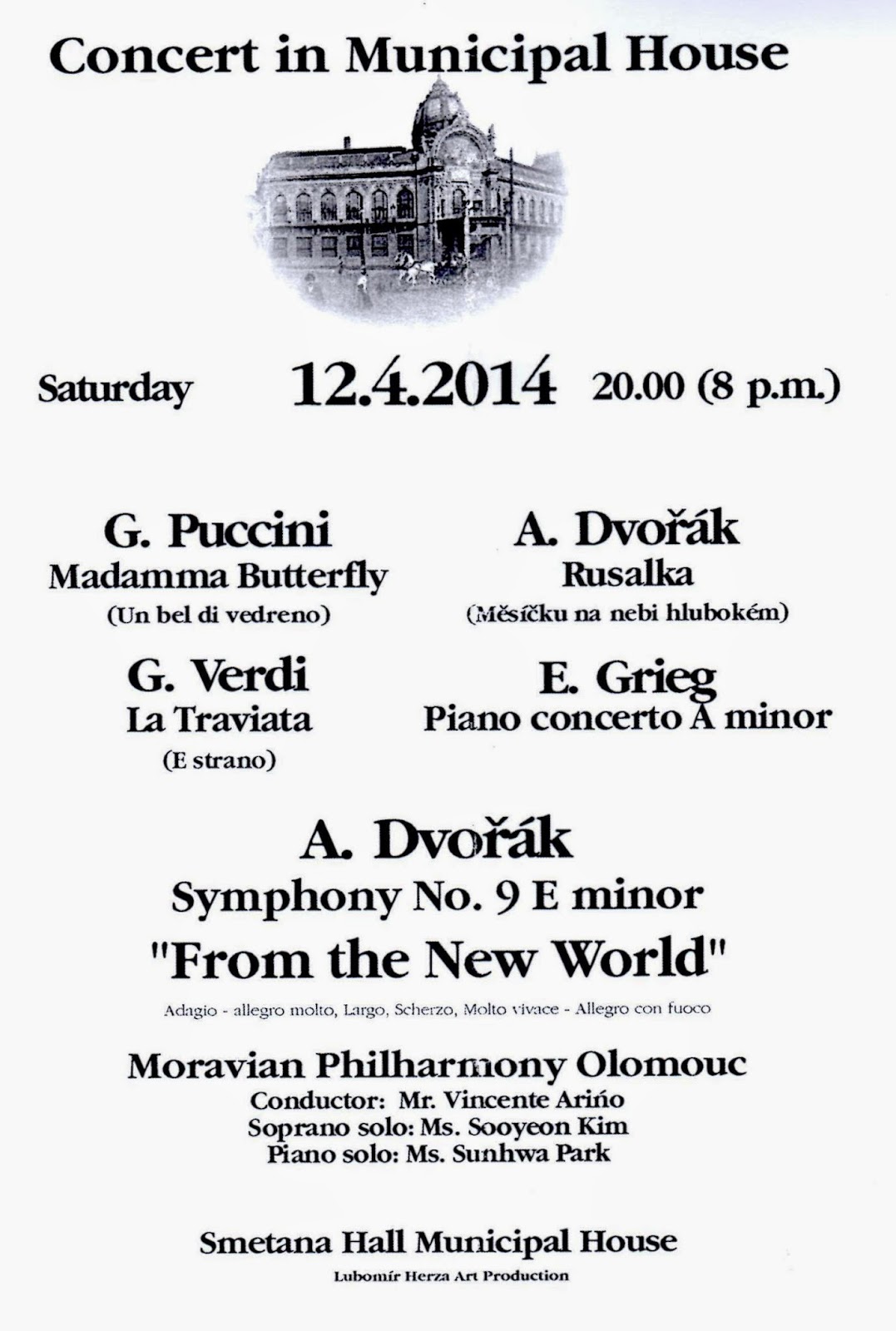 AMC attended a concert by the Moravian Philharmony Olomouc at the Municipal House Smetana Hall. This hall is a perfectly preserved Art Nouveau  masterpiece and seeing it was worth the price of admission.  The acoustics were wonderful.  The program was of the touristy "Top 100" variety.  The smallish Moravian ensemble sounded competent and pleasant, save for an odd sounding tympani. It sounded to AMC's ears that maybe the artist brought the incorrect mallet.  The soprano soloist was Ms. Soonyeon Kim, who is apparently a student at Indiana University.  She was terrible, especially when singing forte.  Her vibrato became so uncontrolled that AMC thought its wobble might throw the earth off of its orbit.  She actually provided AMC with some major cringes.  In the Grieg, the pianist was Ms. Sunhwa Park.  She too was terrible.  She seemed to miss notes, add notes, and occasionally played the wrong notes.  The program said "She is now teaching talented students.." at various universities. Maybe their talents make up for her seeming lack of talent.  The conductor was Vincenter Arino Pellicer, although the person pictured in the program looked nothing like the person on the podium.  The program itself seemed to have been translated from Czech to English by Google Translate.

AMC attended a tourist concert at the Prague Castle.  It was titled "Pearls of Czech and World Classical Music."  the program included the umpteenth performance of  Smetana's "The Moldau" (actually the Vltava River that runs through the center of Prague). though played on a piano.  It was nice seeing and hearing a chamber performance in an actual castle camber.  The program claimed that the performers were professional musicians including members of the Czech Philharmonic Orchestra.  AMC takes the program's word, but neither the pianist or violist were separately identified.  the pianist was very very good, and she added her own rhythmic flourish to the transcriptions.

Finally AMC attended another touristy concert at "St. Martin in the Wall" Church.  The ensemble playing the program was name "The Old Prague Music Ensemble."  The church's acoustics were absolutely wonderful and flattered the sound of the quartet.  And yes, there was another performance of "The Moldau."  This was actually a delightful concert filled with familiar pieces played by a very good group, whoever they are.    AMC was happy to attend.  The church was built in the 12th century in Romanesque style.  It is devoid of decoration, which is a contrast to the very heavily decorated Baroque churches in the city.