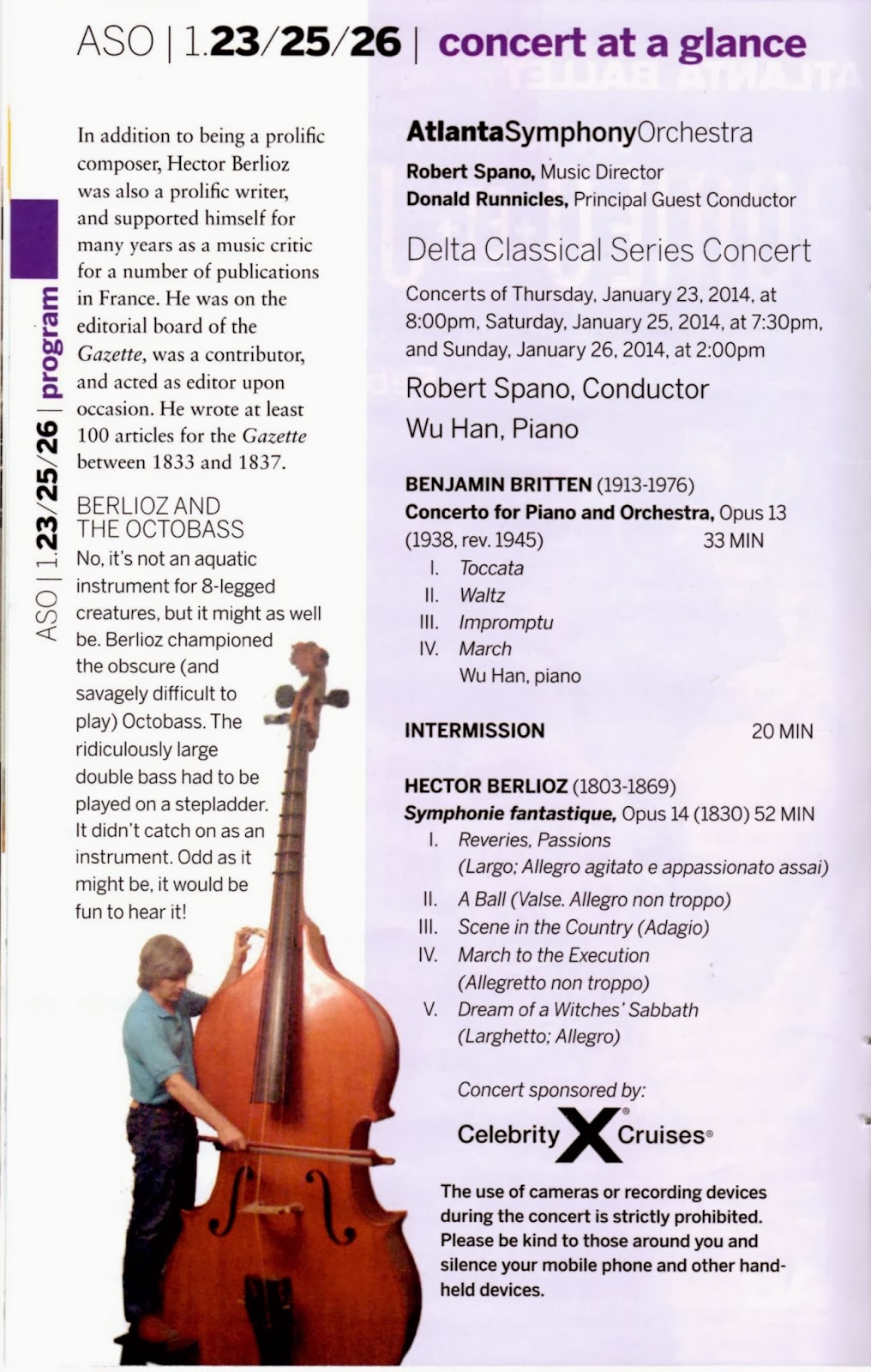 The Atlanta Symphony Orchestra, under Music Director Robert Spano presented a concert made up of two pieces.  The first was the Britten Concerto for Piano and Orchestra and the second Berlioz's Symphonie Fantastique.  The soloist in the Britten was superstar Wu Han.  Click here for program notes: http://www.atlantasymphony.org/ConcertsAndTickets/Calendar/2013-2014/Wu-Han.aspx

Ms. Han is a technical wizard on the piano and she has clear ideas about how she wanted the piece to unfold.  During rehearsal, she advised Spano on tempos, shading and phrasing.  These two great musicians seemed to have a sympatico that elevated this performance above the average weekly fare of any orchestra.

Britten would have been 100 years old in 2013.  His music shows its legacy from the British composers of the early twentieth century.  It is often lyrical, but always accessible.  AMC's only hesitancy about it is that it seems to suffer from a certain predictably- not in the same way Mozart's music is predictable (in AMC's view)- but predictable in the context of the music of the past entry.  Dissonances are added that slightly derail a melody, for example.  It is almost as if the composer went out of his way to avoid being labeled as a lyrical melodist.  Thus, in the waltz, dissonances almost seem put in to ensure the listener that this music was from the twentieth century rather than the nineteenth century. AMC gets that, but it seems a bit of a contrivance.  And while the final movement marked "March" is pleasant, AMC is left to wonder why it seems that every composition by an English composer must include a march.  Maybe its genetic.

The Berlioz received what was easily the best performance this season.  This nearly hour-long work is full of brilliant orchestra that requires the highest technical proficiency.  During open rehearsal, AMC sat on stage adjacent to the double basses.  As cellist  Jennifer Humphries said recently- there is nothing like the sound of a full symphony and nowhere is that more obvious than being on stage!    During the concert there were several outstanding performances.  The trombones and tuba were spectacular.  They give produced a sound that was palpable and so appropriate to this work.  The percussion was spectacular, including the use of the Symphony's new bells.   The timpani had passages that were so subtle they would have been lost before Symphony Hall's acoustical renovation. This great work is a tribute to Principal Mark Yanich The three bass drums were incredible, thanks to Thomas Sherwood, Principal, and William Wilder, Assistant Principal. Elizabeth Koch Tiscione, oboe, and Emily Brebach, English Horn, played their dialogue at the start of the third movement with great feeling.  Tiscione managed a pianissimo that was so quiet and controlled- AMC doesn't recall hearing anything like it. The ASO, in total, performed the Symphonie Fantastique wiyj abolute virtuosity.

AMC's only criticism was in the first movement where Director Spano did not take advantage of the sharp delineation of dynamics that Berlioz indicated.   This tended to take some of the nuance out of the performance, but again this was a very small issue.