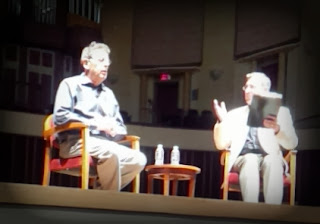 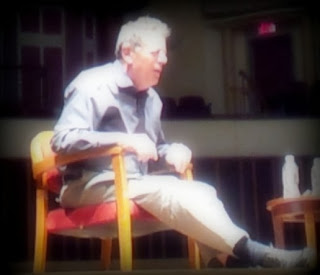 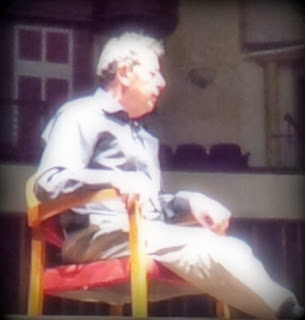 AMC attended Emory's Creativity conversation with Philip Glass.  In his mid 70's Mr. Glass has a world of experience and his oeuvre continues to grow.  He may be one of the most prolific and honored composers of the last half century.  He said that when he is asked what kind of music he composes he says he responds with "soundtracks" since most people can relate to that rather than if he said "string quartets."  Of course, he has composed for many films, including:

Mr. Glass talked a great deal about his experiences with Nadia Boulanger, the legendary French composition teacher who influenced so many modern composers.  to find more about Ms. Boulnger, click here:  http://en.wikipedia.org/wiki/Nadia_Boulanger.  Glass seemed to have a tumultuous relationship with his teacher- he describes her as creating exercises that were frustrating and exhausting.  yet he stuck with her as did so many others who complained of her approach.

Another major influence on his style was Ravi Shankar (http://en.wikipedia.org/wiki/Ravi_Shankar) who had Glass transcribe into Western musical notation his Indian music.  Glass would indeed transcribe a part, give it to a musician, who then played and improvised on the written material (please forgive AMC for being less than facile with this description).  This became the mechanism that Glass used in his early music with the Philip Glass Ensemble- he would compose a line and then the musicians would elaborate on it.  By his own admission, he felt that Mr. Shankar had more warmth and heart than Ms. Boulanger.

Mr. Glass also spoke of his working relationship with musicians.  While an experienced musician himself, he is not as familiar with the challenges of playing each instrument.  Thus, when he composes he must rely on feedback from soloists regarding what works, and what doesn't.  He particularly called out Julian Lloyd Weber as one musician who was particularly helpful in given feedback about Glass' cello concerto.  He also noted that his Sixth String Quartet has been with the Kronos quartet for sometime as they try to iron out of its technical difficulties.

This conversation was guided by Richard Prior of the Emory University faculty.  Mr. Prior, a composer himself, will have his  '…of shadow and light…' (incantations for orchestra)  premiered by the Atlanta Symphony Orchestra on October 3, 2013.

Mr. Glass has so much knowledge and experience that he can start a sentence a meander quite far afield and sometimes returning successfully to where he began, but not always.  It was wonderful to hear from such a great composer who has influenced modern music in so many ways.  Thanks to Emory for making this possible.


On September 27, 2013 at the Carlos Museum, the Vega String Quartet will  perform Twentieth-Century string quartet Masterpieces including works by Ravel, Bartok, Shostakovich, and Philip Glass’s Quartet No. 5. Contact Name: Arts at Emory Box Office. Contact Phone: 404-727-5050.  That evening, Mr. Glass and violinist Tim Fain will be presenting an evening of chamber music.  Fortunately (if you have a ticket) and unfortunately (if you do not), this concert is sold out!.