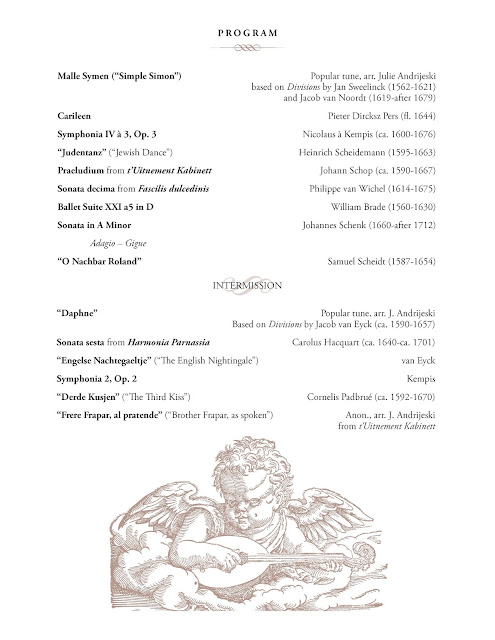 The Fall concert season kicked off for AMC at the September 7 concert of the Atlanta Baroque Orchestra (ABO).  The Atlanta community is fortunate to have two Baroque ensembles that provide high quality performances (the other being the New Trinity Baroque).  Click here for program notes to this concert:  http://atlantabaroque.org/concerts-and-events/past-concerts/concerts-in-2013/2013-09-07-program-notes/

The ABO's Music director and concertmaster is Julie Andrijeski, who has an impressive background in teaching and performing on the Baroque violin.   This concert was a collection of pieces that were each fairly short, but in total provided a nice overview of Baroque music.  There were a few standouts.  One was the "Judentanz" that was rhythmic and- no surprise, given the title,- quite dance-like.  The van Eyck "The English Nightingale" was beautifully performed by soloist Catherine Bull.  The Shenck sonata is a warm piece that displayed the talent of Lyle Nordstrom on the Lute.  For AMC the only miss-fire of the evening for AMC was the Padbrue "The Third Kiss."  This work is a motet that here, rather than being sung, was narrated by Ms.  Bull.  The music was nicely performed but the narrative was nearly unintelligible in the reverberant acoustics of the Roswell Presbyterian church.  This may have been a function of AMC's location in the balcony.

The audience for the performance was rather small- maybe numbering in the early 100's.  This may have been a function of people attending local sporting events.  Its unfortunate that more people were not able to enjoy the concert.  The ABO is a talented group that deserves to be heard.

For AMC the Baroque literature has a kind of hypnotic quality because of its spareness and simplicity.  It is not surprising that this music finds its way on the playlists of public radio's "Music from the Hearts of Space." The ABO's membership only included strings (including the harpsichord), which adds to the rather refined quality of the pieces.  It is true that period instruments can sometimes emit sometimes rather strange sounds that, if heard from a modern violin, for example, would be considered the sign of a poorly prepared player.  But in the context of the Baroque period these "errors" can actually add to the charm and authenticity of the performance.

Click here: http://atlantabaroque.org/concerts-and-events/ for information about the next ABO concert.  Put it on your calendar- it will be worth a trip to Roswell.

Thanks to all of the benefactors, donors, patrons, volunteers, and musicians that made this concert possible.
at 1:57 PM