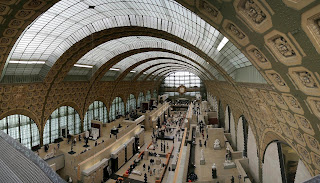 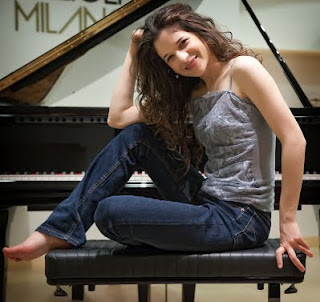 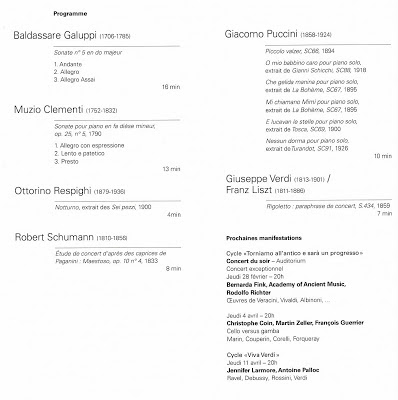 The Orsay auditorium seats between 300 and maybe 350 people and every seat was filled.  It has a wooden shell and stage and provided a warm acoustic environment, which suited the piano just fine.  It looks like it has seen a lot of wear- my seat was held together with duct tape.  But never mind that, AMC was quickly under the spell of Ms. Veneziano.  AMC is aware that taking about an artist's appearance is a sign that maybe there isn't much to say, but not in this case.  AMC will say it once- she is young, beautiful,  has beautiful hair, and, finally, she does not appear to eat too many American hamburgers.

She choose a delightful program.  I did not know the Galuppi, but it is hard to believe that it was composed in the 18th century.  It has long melodic lines and lacks many of the flourishes familiar to pieces of that era, such as trills.  Ms. Veneziano played it as impeccably as she was dressed.  To hear this piece played by another artist, click here:
http://www.youtube.com/watch?v=jcb4SvoCiZ.

The Respighi is a beautiful, atmospheric piece.  It is 20th century music that harkens to late 19th Century romanticism.  AMC wonders why  more of Respighi's work hasn't made it into the standard repertory.  Maybe it's the incredible glare from his Rome triptych. Again, Ms. Veneziano played the piece sensitively. To hear this music, again by another artist, click here:
http://www.youtube.com/watch?v=licitQbNSlc

The highlight of this recital was Ms. Veneziano's playing of an arrangement of Puccini's Nessun Dorma. AMC invites you to click here to obtain more information about this aria: http://en.wikipedia.org/wiki/Nessun_dorma.

AMC will also refer the reader to here to hear this piece played by another artist: http://www.youtube.com/watch?v=f5eoLdZE0uc

AMC realizes that hearing the music played by another artist is a bit unfair to the artist being reviewed.  So, as beautiful as that YouTube performance is, it does not match the elegance, sadness, longing, and love, that Ms. Venziano breathed into her performance  This was absolutely an incredibly sensitive presentation that resulted in people wiping away tears as the lights went up.  AMC has not seen this before and even now he only saw it through the mist in his own eyes.  This was one of the best solo program I have heard in some time and AMC looks forward to seeing and hearing from Ms. Veneziano again.
.
at 1:55 PM