One of the most important pianistic talents of our time- can we vote on that? 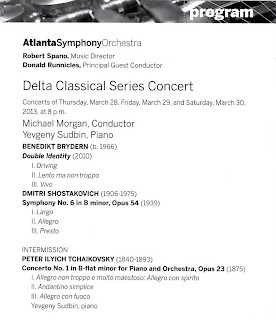 Prior to the beginning of this week's Atlanta Symphony Orchestra concert, two chamber works were performed by members of the ASO. The first piece, titled "Red", by minimalist composer Marc Mellits (http://en.wikipedia.org/wiki/Marc_Mellits) was performed by principal percussionist Thomas Sherwood and William Wilder, Assistant Principal.   AMC is a big fan of minimalism and felt the performance was outstanding.  Mr. Sherwood has shown his skills in this music frequently as a member of Georgia Tech's Sonic Generator (see a video on AMC's YouTube channel at: http://www.youtube.com/watch?v=sehLhnn7uyg). The second piece was a sonata by Ligeti (http://en.wikipedia.org/wiki/Gy%C3%B6rgy_Ligeti), which demonstrated that even avant-garde composers can produce readily accessible music.  This work highlighted the wonderful wind players in the ASO.  Thanks to Mr. and Mrs. Ken Meltzer for sponsoring these chamber recitals.

This concert by the Atlanta Symphony Orchestra was led by guest conductor Michael Morgan (http://en.wikipedia.org/wiki/Michael_Morgan_(conductor), presumably because Music Director Robert Spano is seeking fame and fortune elsewhere.  The program notes for this concert appear at: http://www.atlantasymphony.org/ConcertsAndTickets/Calendar/2012-2013/Pre-Concert-Recital-03-28-13.aspx.

Mr. Morgan began the program with a new work by Benedikt Brydern, titled Double Identity.  At the risk of sounding like a most ungrateful curmudgeon, AMC felt this music should have been used as a soundtrack to a movie about George Gershwin.  It was derivative and lacking creativity.  Maybe it would have been better played by a "big band,"  but it became a dinosaur when played by a full symphony orchestra.  AMC is always concerned at the sight of a drum kit being prepared to play at a symphony concert.  It usually means that a lumbering piece of some kind of pop-related music is going to follow.  The ASO played the music competently but AMC would have preferred that competence be spent on a more important piece of the contemporary repertoire.

The Shostakovich Symphony No. 6 has been written about many times.  It begins with a long Largo, movement followed by two shorter Allegro and Presto movements.  The largo is an exquisite composition.  It paints a sonic picture of a dark, barren purgatory from which heaven can be seen, but never reached.  It is anxious, but not trembling; it is soaring, but not joyous; it is hopeful, but not victorious.  This piece demonstrates Shostakovich's mastery of orchestration  and depth of feeling.  Mr. Morgan shaped the piece beautiful, and the ASO responded with the very best of its technical skill.  The final two movements are odd and don't seem to complement the power of the first. They are bombastic, militaristic, aggressive and in-your-face.  Seems like they were toss-aways for the composer after completing the powerful first movement.  Better he would have stopped and left the Largo as a standalone work.

The final work was the all-too-familiar Tchaikovsky First Piano concerto with guest soloist Yevgeny Sudbin (http://en.wikipedia.org/wiki/Yevgeny_Sudbin).  A review of one of his recordings say that he is one of the most important pianistic talents of our time..."  Oh my- talk about journalistic excess.  Mr. Sudbin's performance of the Tchaikovsky was wooded and full of odd phrasing.  During the cadenzas, his paying was choppy, and, at times, had intonation problems.  His playing did not flow- it was as if he was trying to highlight each individual note rather than form them into a homogenous whole.  It was one of the least polished performances of this work that AMC has heard, at least by a professional artist.  But there were also other problems.  Mr. Morgan let the beat go limp at several points, particularly in the last movement.  But the worst part of the performance was the intonation problems of the horns, whose parts play such an important role in this work.  Notwithstanding any of this, the Atlanta audience gave its usual standing ovation.  Not only was it not deserved, it seemed naive and misplaced.  Polite applause would have been all that was necessary.  This performance was a major misfire.

A final note- AMC heard an interview with Mariss Jansons, who some argue may be the greatest living conductor.  He had just completed conducting a performance by the Pittsburgh Symphony of Tchaikovsky's Fifth Symphony at Tanglewood.  The audience went wild and Jansons was called back for many curtain calls.  During the interview Jansons remarked that one notable characteristic of the PSO is the uniformity of the skills of the musicians across the various sections of the orchestra and that there were no weak sections.  AMC wishes the same were true of the ASO.  It could be so much better if all sections were at the level of skill of the violins and woodwinds.

Finally, Ken Meltzer mentioned that next season, the ASO would feature more of its members as soloists.  AMC recommended this as part of a strategy to find  new business models for America's financially struggling symphony orchestra's.  AMC is certain that ASO management developed a similar strategy on its own, but it rewarding to know that great minds think alike.

Thanks to all of the benefactors, musicians, patrons, and volunteers that made this concert possible.

Addendum:  AMC attended another performance of this program.  The Brydern only gets worse upon further hearings.  One patron saw the standing ovation for the work and he said something to the effect that these people will stand for anything.  In the Shostakovitch, there was some remarkable playing in the reeds and woodwinds.  Christina Smith, , Carl Nitchie, Laura Ardan, Elizabeth Koch Tiscione and Emily Brebach all deserve recognition of their great playing.  The Tchaikovsky was a bit better, but still had clunky runs and missed notes.  The French horns were much better.  The audience loved it all, so maybe that is all that matters.  Even with a full house on the final night, attendance hovered overall around the house being two-thirds full.
at 10:27 AM