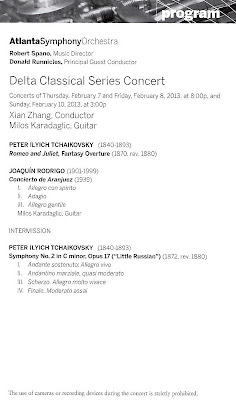 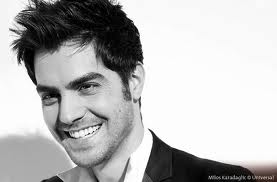 Mr. Karadaglic was masterful in the Concerto de Aranjuez. This piece is full of Spanish color and seduction.  The first movement is bright and sunny, with catchy tunes and brilliant orchestration. The second movement is like a languorous and sensual supper at dusk, and the third movement is an exciting Iberian conclusion.  What's not to enjoy?    He plays nimbly with a light and delicate tone- almost harp like.  He played with one foot propped up on a white guitar case.  He seemed to delight in the music and attracted several curtain calls, which he truly deserved.  He also presented an encore that I did not recognize but it was played with equal aplomb.  Karadaglic has a very bright future.

The Tchaikovsky "Romeo and Juliet" fantasy overture has one of the most memorable love themes in it- the kind of melody that the melancholy prone composer  could do about as well as anyone.  This melody is so familiar that most people know it even if they don't know where it is from.  In structure it resembles the Russian composer's "Francesa da Rimini" and, yes, his "1812 Overture" (which I heard last night on WABE played in a garish version by the Gothenburg Symphony under Jarvi).  For this performance I thought things started out with Ms. Zhang being totally in control .  The ASO seemed disciplined and on its toes.   Unfortunately I was wrong.  By the time we arrived at that famous love theme, things started to get out of control.  As part of the theme, the composer added a throbbing-like effect in the French horns.  They actually are meant to punctuate the melody played in the strings.  This is a technique that Tchaikovsky used frequently.  Those accents are supposed to be that and not dominant over the melody.  Not so in this performance- the horns were so loud and without grace the beautiful theme was overwhelmed and it was unclear whether the strings or the horns were to be in the spotlight.  It was apparent as the piece wore on (and I used that phrase intentionally) it was clear the Ms. Zhang never heard a brass instrument that she thought played too loudly.  This was a big brassy unpleasant extravaganza.

Matters were even worse in the Rodrigo concerto.  Again, Ms. Zhang's tendency toward the brass lead the ASO to provide a very unsympathetic role vis a vis Mr. Karadaglic's sweet solo performance.  His delicacy was overwhelmed by overly loud brass accompaniment.

The final work, Tchaikovsky's Second Symphony, has always been a favorite of mine.  In fact I have always like his first three symphonies.  They lack the white hot emotionality of his more famous final three symphonies. I find the first symphony ("Winter Dreams") to be a wonderful evocation of what I imagine a Russian winter snow-scape must be like.   His first three symphonies also seem a bit naive, but they are thoroughly Slavic.  In fact, the second symphony is subtitle "Little Russian" because of it inclusion of a Ukraine folk tune.  I was looking forward to hearing this delightful piece, but under Ms. Zhang's leadership this performance was nothing short of a train wreck.  It is a performance that reviewers in the UK would call "vulgar."  Again the brass were totally out-of-control.  They drowned out the strings, particularly when the latter were playing key themes.  At some points in the fourth movement, I thought the whole thing was going to collapse.  there were major ensemble and intonation problems in the strings- something I do not expect from the ASO.  Similarly unusual was a squeak from the clarinets.  The horns were up to their usual lack of subtlety, while at the same time having intonation problems.  Ms. Zhang's emphasis on the brass made it seem like they were intoning the "Fate Theme" from the Fourth Symphony, which seems totally inappropriate in this piece.  I was happy when this mess was over with.  Someone once said something to the effect that when conductors think they have the brass at the right volume level, they should then reduce it by half.  Ms. Zhang should take this advice to heart.

There was the usual Atlanta standing ovation to which Ms. Zhang responded with an encore.  One patron described it as Chinese movie music.  I did not stay- I had to exit to stop the blood gushing from my ears.

Even for this concert filled with romantic masterpieces Symphony Hall was maybe three quarters- full.  Other than movie music and dusty performances of the "Messiah", what will it take to fill seats?  How can the ASO survive with what seems to be declining patronage?  Why would a corporate sponsor want to donate to an organization that has a difficult time attracting an audience?   Finally, what's up with the constant absences of the ASO principles?  What's up with Music Director Spano's near  invisibility so far this season?  Questions for the ages I guess.

Thanks to all the benefactors, musicians, patrons, and volunteers that made this concert possible.
at 12:16 PM