1.  The Chinese Business Association sponsored a Chinese New Year Gala.  Aside from it being a great entertainment value, it showcased soprano Courtney Huffman (http://courtneyhuffman.com/). I had not heard of Ms. Huffman previously but she has a clear crystalline voice and she also seems like a talented operatic actor.  She would have been spectacular in the ASO Christmas show( instead of the shrill and grating soprano who actually performed).

2.  The ASO Delta Classical Series Concert presented a wonderful performance of the Bruch Violin Concerto with Vadim Gluzman.  To  see the program notes, click here: http://www.atlantasymphony.org/ConcertsAndTickets/Calendar/2012-2013/Gluzman-Bruch-Scottish.aspx. Gluzman was all that anyone could want as a soloist.  He was immersed in his performance  and with the music, and he seemed to have a good rapport with Conductor Kazushi Ono.  Gluzman has a large and strong tone, but also demonstrates the ability to be quiet and lyrical.  The Mendelssohn "Scottish Symphony" was played very skillfully by the orchestra.  As usual the standouts were the flutes, brass, and strings.  Having Messrs Coucheron, Pu, Bruns, and Wagner in the first four violin chairs also made for some sterling violin playing.  It is nice to hear Mendelssohn's music. He does not appear to be as popular as he was in decades past, but his music is a nice transition from the classic period to the later romantic, where thick and dense orchestration was typical.  Mendelssohn's style seems a bit more lean and, well, clean.   Maestro Ono was brilliant.  He conducted the Von Weber from memory and took command in the Bruch and Mendelssohn.  He attended to the dynamics, instrumental entrances, and the arc and thrust of the music.  He provided a very competent orchestral accompaniment to Gluzman.  He never let the orchestra overwhelm the solo violin, yet also was bold when needed.  The ASO seems to perform best when it is lead by a conductor who attends to details and who is "in charge."  Maestro Ono is such a conductor.  His bio appears at http://www.atlantasymphony.org/About/Artists/Guest-Conductors/Kazushi-Ono.aspx.  Gluzman's appears here: http://www.atlantasymphony.org/About/Artists/Guest-Artists/Vadim-Gluzman.aspx.

3.  The Music at Emory Concert Series presented a recital by Karen Freer.  I believe that the last such recital by Ms. Freer was two years ago.  The solo performance of the challenging Bach Cello Suite No. 6 was maybe overly ambitious.  Ms. Freer seemed to have a bit of performance anxiety, especially at the beginning.  She was strongest in the Allemande section.  The Brahms Sonata for Cello and Piano had Ms. Freer accompanied by Wooyoung Ellie Choi.  This was a very nice performance that had Ms. Freer playing quite competently.   The only quibble was with Ms. Choi's rather bombastic approach.  Her overly loud playing sometimes overwhelmed the performance.  The final work had Ms. Freer joined by five other cellists and four bass players.  They performed Mussorgsky's "Pictures at an Exhibition" as arranged by Ilkka Palli.  (Small point- both the composer's and arranger's names were misspelled in the program).  It is not easy to find anything about Palli on the web, except for this: http://www.mymusicbase.ru/PPB/ppb11/Bio_1138.htm.  This arrangement of this thrice familiar work obviously was only for low strings, but it was phenomenal.  For me it shed new light on the structure of the work, especially how the Promenade theme was woven throughout, even  through the tumultuous "Great Gate of Kiev." Maybe I have been diverted by Ravel's rich orchestration when I have listened previously, but Palli's arrangement lays open and makes clear the work's structure.  It also made the work sound very contemporary by including not-often-heard sounds from the wonderful instruments.  The skill of this ensemble was remarkable, playing the work with strength and technical accuracy.  I hope that this group will record this piece- it is a knockout performed by an outstanding group of artists. 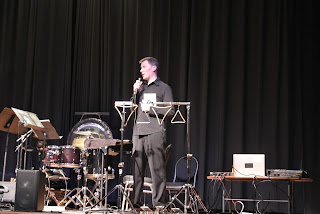 4.  (For a video of this concert, click here: http://www.youtube.com/watch?v=sehLhnn7uyg)  Atlanta is fortunate to have such an active music scene.  Some of the best performances come from smaller ensembles including the New Trinity Baroque, the Atlanta Chamber players, the Georgia Chamber Players and the Atlanta Baroque Orchestra.  But the mightiest of these small groups is Georgia Tech's new music ensemble Sonic Generator.  Most of the members of the group are also part of the ASO but they explore sounds in ways the ASO never dares.  Information about the group can be found at www.sonicgenerator.gatech.edu.  Their January 29th performance was challenging, exciting, puzzling, and satisfying.  Some of the works I didn't particularly like, such the Diaz de Leon's Mansion.  I'm not sure however that we are supposed to "like it" as much as simply experience it.  If Darren Aronofsky ever wants a new score for his film "Pi", I nominate this work.  It was eerie, odd, and off putting, just like that incredible movie.  My favorite piece was Davis' "Diving Bell," performed by Tom Sherwood on the triangle.  Using amplification and distortion, the over-and under-tones of a set of different-sized triangles was realized.  It is a thoroughly enjoyable piece and immediately accessible.  I also liked Diaz de Leon's "Gated Eclipse" because of its sound layering and use of amplified, yet traditional instruments.  For more description of each piece, go here: http://www.sonicgenerator.gatech.edu/event/sonic-generator-presents-four-under-forty.  This music is not for everyone, but the audience of maybe 150 people seemed to enjoy and "get it."  I sure did.
at 11:18 AM