What if they gave a concert and no one came? Part II..... 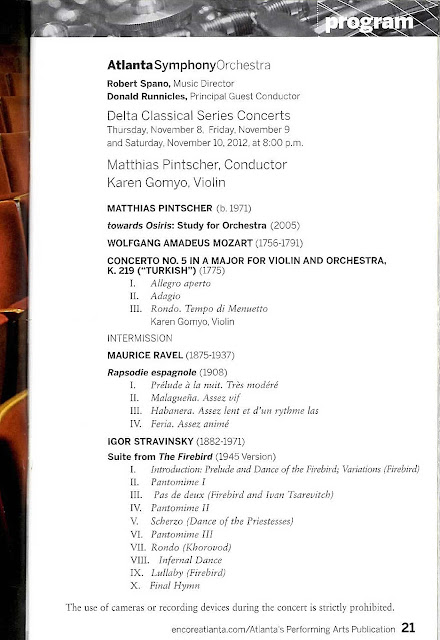 Symphony Hall was about half full for this concert.  It's unclear the reason, but maybe it's because another Mozart piece was included, when two were played on last week's program.  Recently, there was an interesting article when uber-maestro Bernard Haitink complained of the concert-going public's current love affair with Mahler, which he derisively calls the "Mahler Cult."    (see http://www.artsjournal.com/slippeddisc/2012/11/bernard-haitink-lashes-out-again-at-the-mahler-cult.html?utm_source=feedburner&utm_medium=email&utm_campaign=Feed%3A+artsjournal%2FbQrW+%28Slipped+disc%29). I think that there is a similar cult in Atlanta that believes anything Mozartian must be great.  I appreciate that those who program concerts try to give the audiences what they want, but maybe they are miscalculating as witnessed by the poor attendance over the past two weekends.  But then again, maybe something else is going on that is better at attracting public attention.

I missed the "towards Osiris" piece.  The overly familiar "Turkish" violin concerto featured soloist Karen Gomyo.  She is described in the program notes through a quote from the Chicago Tribune:  "A first-rate artist of real musical command, vitality, brilliance and intensity."  I hope that is not a full quote since it is a phrase and has no ellipses.  Anyway, Ms. Gomyo started the concerto in the most tentative manner- I was concerned that maybe she was falling ill or something.  She played her Stradavarius with ample volume and appropriate dynamics, after the weak start.  Her instrument was curiously steely sounding, which I am sure was magnified by Symphony Hall's steely acoustic.  Ms. Gomyo also had some bowing problems, especially with her bow touching a string adjacent to the one she was actually playing on.
Maestro Pintscher is both a conductor and a composer.  He was recently appointed to be the next music director of the Ensemble Intercontemporain, a Paris-based chamber orchestra that was founded by Pierre Boulez.  It performs mostly modern classical music.  Pintscher's interpretation of Ravel's  "Rhapsody Espagnole" was very satisfying.  He attended to dynamics and the ASO responded effectively. Ravel's orchestration is so lavish and rich that is showed off the strengths of the orchestra.  The winds and strings were golden.  The violin duet by David  Coucheron and  William Pu were wonderful, and demonstrated that all violins do not sound steely in Symphony Hall.  This music is so colorful and dynamic that it wakened some of the snoozers in the audience.
The Stravinsky likewise is full of colorful and occasional bombast.  It also highlights the orchestra's skills.  There was great playing by the woodwinds and brass.  There are always a few intonation problems in the ASO's French horns, and this performance was no exception.  The strings continue to sound silky smooth.  Pintscher and the orchestra did have some rhythm problems in the "Infernal Dance."  The performance came perilously close to spinning out of control- where tight ensemble was required the various sections of the orchestra seemed not to hear each other.  The same was true in the "Final Hymn" where the violins are supposed to play in unison with the brass.  They didn't.

It was great hearing the Ravel and Stravinsky pieces.  While each being over one-hundred years old, they are still considered "modern" by some.  I am happy that someone made the bold programming choice to put them on the schedule.

Thanks to all of the benefactors, patrons, and volunteers that made this performance possible.