What if they gave a concert and no one came....

This week's Atlanta Symphony Orchestra's concert presented two Mozart staples and works by two Richards- Strauss and Wagner.  Audiences stayed away in droves, with the house being less than half full both Thursday and Friday nights.  Could it have been the "modern composers?"- he says with tongue in cheek.  Atlanta audiences, like many across the country, only seem to like the "top 25" in classical music so maybe this is the answer.  Maybe there was a sports team having an event that took center stage, so to speak. 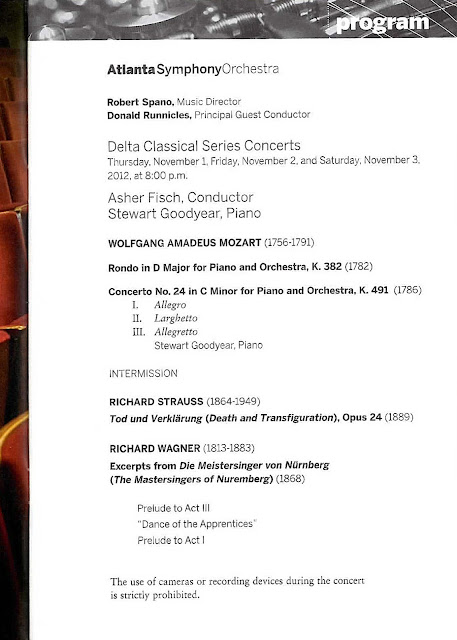 I am sorry but I cannot review Mozart very effectively.  I am so over his music so it does little for me.  The Rondo simply convinced me that his music is so predictable that a decent computer program could be written to duplicate it.  Maybe I am the heartless one, but his music reminds me of a Watteau painting- full of many pretty things, but not much else.  If pretty is one what likes then go for it.  But for me, I just do not understand the reverence we hold for Wolfgang's music (but I grant the value of his innovations).
I heard pianist Goodyear's 'Variations on "Eleanor Rigby'" the other day on the radio- I think it was on "Performance Today." I liked it, sort of like I like dessert.  It was tasty but didn't do a lot for nourishment.  His Mozart seemed very competent and he had a large tone that helped overcome Symphony Hall's poor acoustics.  Mr. Fisch and the orchestra provided a sympathetic accompaniment.

Strauss' "Death and Transfiguration" got my attention.  Not only was the ASO in top form, the music is a powerhouse of sound that really conveys the composer's intent.    The Colorado NPR site says the following:
The program for the work is best described by Strauss himself. In a letter, he said that the music depicts “the dying hours of a man who had striven towards the highest idealistic aims, maybe indeed those of an artist. The sick man lies in bed, asleep, with heavy irregular breathing; friendly dreams conjure a smile on the features of the deeply suffering man; he wakes up; he is once more racked with horrible agonies; his limbs shake with fever--as the attack passes and the pains leave off, his thoughts wander through his past life; his childhood passes before him, the time of his youth with its strivings and passions and then, as the pains already begin to return, there appears to him the fruit of his life's path, the conception, the ideal which he has sought to realize, to present artistically, but which he has not been able to complete, since it is not for man to be able to accomplish such things. The hour of death approaches, the soul leaves the body in order to find gloriously achieved in everlasting space those things which could not be fulfilled here below.”

The power of Strauss' to let the music speak to this profound theme is breathtaking.  The orchestration calls on the orchestra to play with sophisticated dynamics and skill.  The ASO was certainly up to the task, especially the brass and the ever improving strings.  This was a great performance under Maestro Fisch.

The Wagner pieces were a welcome review of one of the great works of this great master.  Again the orchestra is required to be virtuosic.  Seeing the bows of the strings move with such fury, and ensemble, makes on appreciate the skill of the ASO.  The cellos and basses were also given a chance to demonstrate their abilities.  It was nice to finally hear some low bass in this auditorium that seems to resist low notes.  The brass were given free reign and they were up to the challenge, except for a few intonation problems in the French horns.  Mr. Fisch, who I had not heard of previously, has an operatic background and it showed.  Last season there was a performance of the Prelude to Act I.  It was leaden and unfocused.  Conductor Fisch made the music come alive with no drag or excessive heaviness.

It is too bad that attendance was so poor.  It will be difficult to get the ASO to return to financial health with such poor ticket sales.

Thanks to all of the patrons and benefactors who made this concert possible.
at 5:18 PM