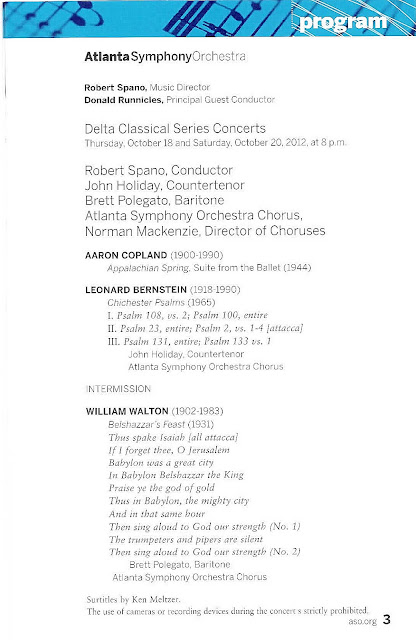 The Atlanta Symphony Orchestra presented this concert as part of the Delta Classical Series.  It included two choral works by Bernstein and Walton and one very-familiar piece by Copland.  Thanks to all benefactors and patrons who helped underwrite the cost of the performance.

The ASO performed admirably.  The violin section continues to demonstrate its new sheen.  The flutes and brass again were outstanding. The reeds too were wonderful.

By difficulty with this concert was the vaunted ASO Chorus, directed by Norman Mackenzie.  There seems always to be praise heaped on this group, but in this performance I had to question "Why?"  But as the program wore on I began to get a sense of the problem.  The chorus is always too loud.  It overpowers the orchestra and, particularly in the Walton, the female voices were so shrill that the singers seemed to be shouting.  I have observed in other reviews that the chorus could be reduced by 1/3 and still be a powerhouse.  The men's voices, however, sound like a section of baritone crooners.  There seemed to be no bass whatsoever, but then the same could be said of almost anything played by the basses in the orchestra.  So what's the deal?  I think it's a poor mix between the Symphony Hall acoustics the size and composition of the chorus.  Some of these pieces will be taken to Carnegie Hall and the New York audiences may hear a very different presentation, in part because of the friendlier sound environment of Carnegie Hall.

A top-flight conductor should be aware of the interaction between the performance venue and the music.  In Atlanta, the goal seems to be volume over nuance and balance.  Adding more bass voices to the chorus and emphasizing their presence would be a help.  Re-seating the orchestra to have the bass section face the audience would also help.  Toning down the female vices in an acoustical setting that is bright to begin with would also help
.
The two soloists, John Holiday, countertenor, and Brett Polegato were excellent.  Mr. Holiday's voice is crystalline and pure.  Polegato has outstanding enunciation.

But it should not be overlooked that the ASO plays beautifully and deserves credit for sounding so good in such a poor venue.

By the way, is no one proof reading the program? 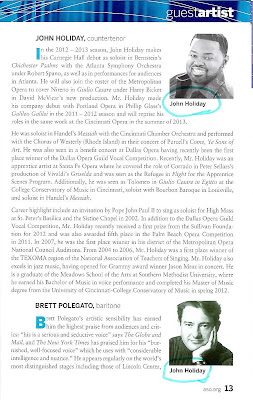