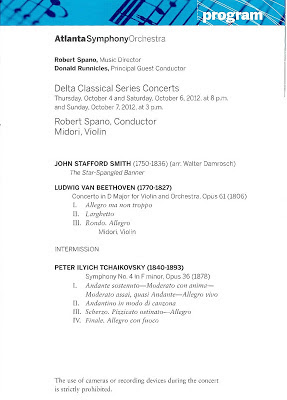 Returning after its bruising contract negotiations, the Atlanta Symphony again took the stage at the Woodruff Arts Center Symphony Hall.  It was good to see and hear the ASO again, but hallway conversations with musicians demonstrated their less-than-warm feelings for management.  Their disillusionment did not seem to affect their collective performance, which speaks to their professionalism.  There were five new ASO members introduced with this performance.

Thanks to all the benefactors who helped underwrite the cost of this performance.

In honor of the ASO musicians, they entered the stage from the wings, player-by-player.  This gave time for the audience to show their appreciation for the individual musicians.  I personally like this approach, used mostly in other countries.  It also avoids the cacophony that is created when all the musicians are on stage tuning and practicing before a concert.

The concert began with a rousing rendition of the "Star-Spangled Banner."  The audience loved it.

Midori (Goto) was the featured violin soloist in the Beethoven.  Ms. Goto, the child prodigy at 11 years old, has grown into an international renowned musician.  She also has created the philanthropic group Midori and Friends to help bring music to children in New York City .  Rounding out her credentials are a bachelors and masters degrees in psychology.  Ms. Goto does not have a very large tone.  Maestro Spano and the ASO provided sympathetic accompaniment that did not overwhelm the soloist and that resulted in some fairly impressive pianissimos.  This was a fairly straightforward performance that was competent but did not break new ground.  On occasion Ms. Goto had a few bowing glitches, but nothing major, befitting her ranking as one of the preeminent violinists today.  On occasion the brass overshadowed the strings- I am not sure whether this is an acoustical problem or Spano's direction that creates the problem.  Throughout however, the strings were golden and deserve the award for the most improved section over the past few years.

The Tchaikovsky Fourth is a staple of the repertory of nearly every major orchestra.  It reflects the turmoil in the composer's life related to his failed marriage and his sexual preference.  The ASO program annotator tends to shy away from potentially "unseemly" topics in his notes- too bad, since Tchaikovsky's life circumstances have a lot to do with his compositions.  I find his last three symphonies to be hyper emotional, almost hysterical at times, which makes repeated hearings difficult for me.  I much prefer his earlier three symphonies that are infused with folk melodies and simpler structures.  The opening movement of his First Symphony titled "Winter Dreams" is a wonderful evocation of snow, cold wind, a cloudy sky, and a low sun.

The Fourth Symphony begins with the trumpets announcing the "Fate" theme.  Artists during the last half of the nineteenth century focused a lot on fate, a concert that we seem to have outgrown, or simply ignore.  With the composer's life being full of drama, he might easily see fate as his enemy and the notion of intra-psychic causation of many of life's circumstances had not yet been widely accepted.  This turmoil of fate morphs into a beautiful waltz-like center section, only to return again to the insistent fate motif.  The ASO sounded wonderful, with the brass providing the driving force for this movement.  The second movement is introspective and again reflects the composer's despondence.  The third movement is something of an anomaly.  It begins with a pizzicato theme in the strings, with the middle section presenting a march-like theme, reminiscent of some of the effects in the composer's Capriccio Italien.  The final section combines all of the orchestra's sections into a happy restatement of this movement.  The final movement seems to reflect the composer's decision to move forward, reminding the listener a bit of the phrase "life goes on" regardless of the slings and arrows of outrageous fortune.

Maestro Spano's vision of this symphony broke no new ground.  It was well played by the ASO and demonstrated the skill of each section.  But one might want a bit more.  Spano's interpretations often lack nuance and he cannot be accused of bringing a uniqueness to performances that shed new light on a composer's intentions.  Shortly after this concert, I heard a recording from Carnegie Hall with Ricardo Muti conducting the Chicago Symphony in Orff's "Carmina Burana."  Muti masterly shaped the performance- a slight retardando here, a firmata there- that sheds new light on an off-played piece.  One need only hear Honeck's Tchaikovsky's Fifth Symphony to hear how a conductor can help an audience to hear a piece "with new ears." Rarely do we hear Spano do that.  During the musician's strike, many unkind words were written  about the ASO's situation, and some writers took aim at Spano, saying that he is the human equivalent of a metronome.  These are, in my opinion, unfair criticisms and do not reflect the high level of performance achieved by the ASO.  But, new insights are not Spano's forte.