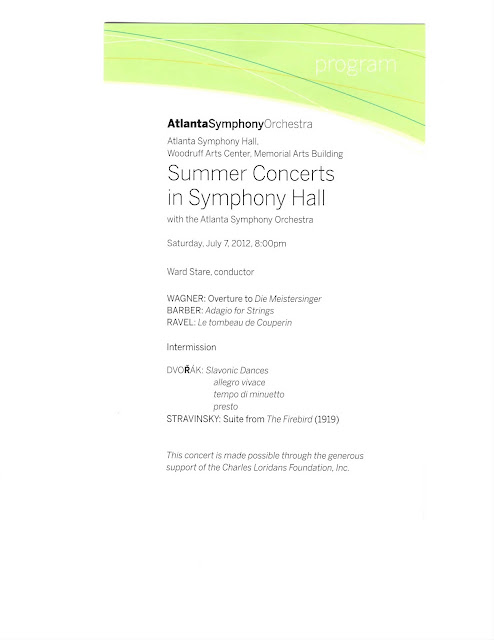 A large "Thank You" goes to the Charles Loridans Foundation, Inc. for sponsoring a free Atlanta Symphony Orchestra concert on July 7.  The house was packed, with many who said that it was their first time in Symphony Hall.  That in itself is a desirable outcome.

Ward Stare, the 29-year old recently appointed conductor of the Macon Symphony, was on the podium.  He is another new entry into the conducting world.  He is charming when addressing the audience and is among the genetically gifted, at least looks-wise.

There were introductory comments by Lois Reitzes of WABE.  Everyone seems to know of Ms. Reitzes and she sounded as out of breath here as she does on her radio show.

During these summer concerts (like the Pops concerts) the ADO has next to none of its principals playing and it has many contract musicians playing.  And it shows.  The Wagner had intonation and balance problems.  Someone once said that if the brass sound just loud enough, then turn them back a notch or two.  The tuba, trombones, and horns were so out of balance with the rest of the orchestra that the piece was more about punctuation than about theme.  The strings were sloppy in their playing.
The Barber piece helped redeem the strings.  This achingly beautiful work sounded all that much better because it didn't have the aggressive brass knocking at the door.

The Ravel, a beautiful and light piece, was a bit leaden.  The strings again had poor ensemble, characterized by sloppy bowing.  It turned Ravel into a lead balloon.

The Orchestra sounded in top form after the Intermission.  The Slavonic Dances were played enthusiastically and all of the sections seemed to be on the same page (of music).  The Stravinsky too was very well done.  It is colorful music that makes extensive use of the brass and the bass drum. It all hung together very well.  When the Symphony is on, it is on.

This free concert was a nice way to spend 90 or so minutes in the air-conditioned Symphony Hall.  Thanks again to the Loridans Foundation for making it possible.