The self congratulatory words were deserved in this case.... 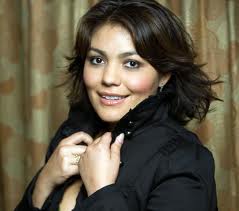 From the Atlanta Symphony Encore program guide:
"Gil Shaham is one of the foremost violinists of our time, combining flawless technique with inimitable warmth and a generosity of spirit."  and,
"Ailyn Perez's dazzling vocalism, as well as her alluring and committed stage presence, have made her one of the most engaging and exciting artists before the public today."

The Atlanta Symphony, conducted by Music Director Robert Spano, presented a program that included:
Bach: Sinfonia in D from Cantata, "Wir danken dir, Gott, wir danken dir."
Bach: Cantata "Nun ist das heil under die Kraft."
Bach: Concerto No. 2 in E major for Violin and String orchestra
Stravinsky: Concerto in D major for Violin and Orchestra
Poulenc: Gloria
The violin soloist was Gil Shaham.  The soprano soloist was Ailyn Perez.  The Atlanta Symphony Orchestra Chorus rounded out the performers.
The Bach Sinfonia sounded a bit thin from the Loge, and sounded much better from the orchestra section.  Just goes to show how treacherous acoustics can be.  The piece also featured Peter Marshall on a Baroque organ.  This music is grand and demonstrates Bach's skills both lyrically and contrapuntally.  The organ added the necessary low notes that add heft to the piece.
The Cantata was an opportunity for the tremendously talented Chorus to show its stuff.  Its enunciation is nearly perfect, as is its ensemble and pitch.  There was  one section, about halfway through the piece, where the sopranos sing a descending melody.   This was the only place in the performance where the singers seems challenging.  To me, they sounded like they were on the brink of falling apart, but alas, they did not.  Norman Mackenzie, the director of the chorus, manages to make every event where the singers participate a nearly note perfect affair.
Mr. Shaham followed with the violin concerto.  He is a superstar and one can expect great things from him, and he surely delivered.  The first movement allegro, was taken at quite a fast tempo.  It added to the excitement of the performance, and only occasionally did Shaham show some bowing difficulty.  He played it impeccably in rehearsal, so  there is no doubt that he has the technical skills needed for the music.  The ever so grateful Symphony Hall audience applauded a bit after the rapid fire movement.  The second and third movements were played with perfection.  There was an occasional imbalance between the orchestra and the soloist, but not enough to mar the overall  effect.  It was apparent that Shaham and Maestro Spano enjoy a great rapport, which certainly adds to the performance.
The Stravinsky Concerto is from the composer's "classical period."  His music was rather lighthearted and it is not much of a stretch to think of parts of it accompanying cartoons.  That's not said to denigrate the work, but rather to show the composer's ability to have fun with music.  Having just heard this concerto played in Vienna, I was eager to hear it in Atlanta.  Shaham again performed beautifully and it was apparent that he enjoyed it.  He even audibly tapped his foot in sections, which made the performance even more exciting.  Again, the affection between the violinist and conductor was apparent at the conclusion of the work.  This was a wonderful performance that not only showed off soloist skills, but also the awesome power of the ASO.  The brass section was particularly remarkable, a very necessary condition for a successful performance of a Stravinsky piece from this period.
The Poulenc was also a showpiece for the Chorus.  The Gloria is not particularly cutting edge music even though it was written in 1959.  Spano successfully held all of the forces in check so that there was only an occasional balance problem.  The soprano soloist was Ms. Perez.  I don't think I have heard a richer yet controlled singer in Symphony Hall.  Her performance was grand, but controlled.  She has a golden tone that projected wonderfully into the hall.  To add to her glory, she had been named the recipient of the prestigious Richard Tucker award on the very day of her performance in Atlanta.  At 32-years old, she has enough time to make an indelible mark in the concert and opera halls.
This was again a stunning performance by the ASO and its guest artists.  It was a joy to hear.
at 5:02 PM