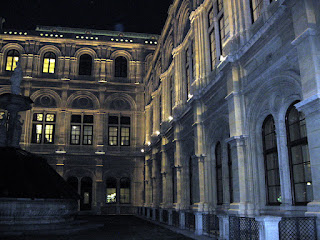 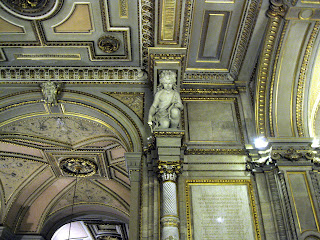 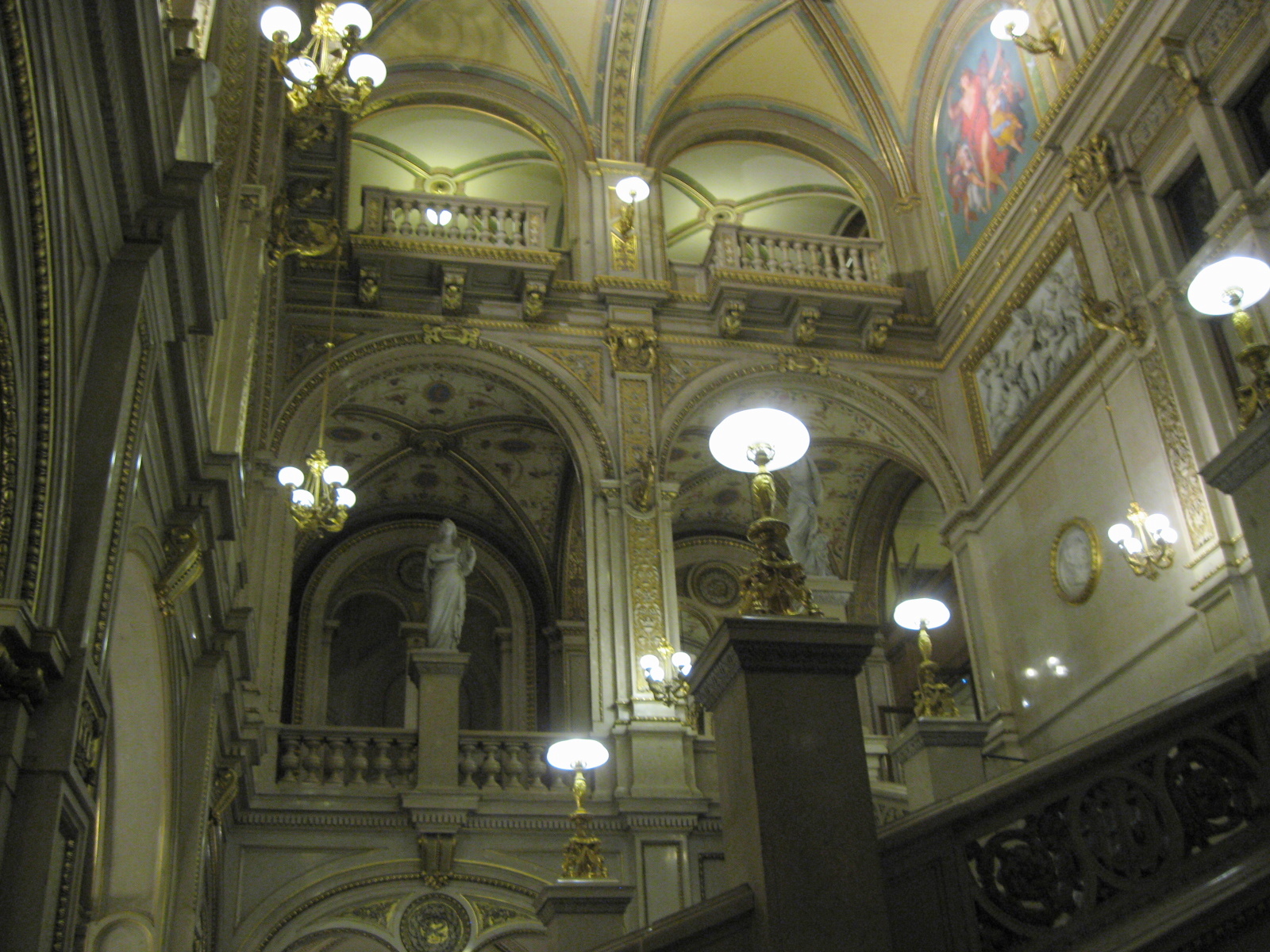 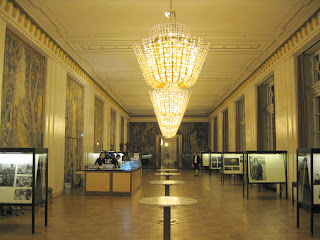 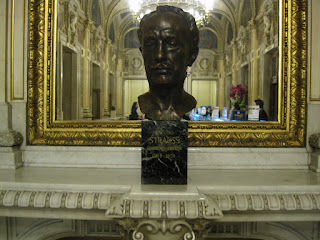 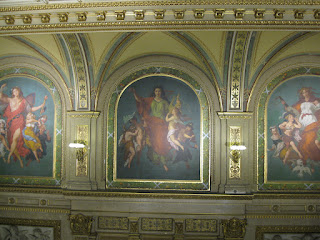 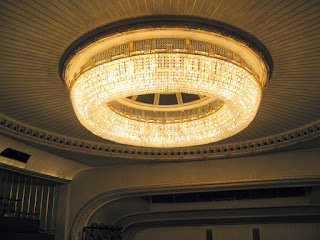 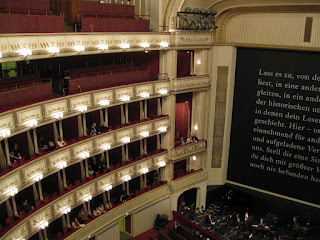 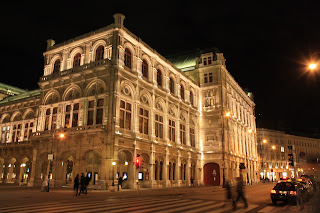 I explored the area around my apartment in Vienna the first night of my arrival.  I wanted to be sure I knew where the Konzerthaus was in order to be timely for the Vienna Philharmonic concert the following day.  On the route was the legendary Vienna Opera House.  A brief history of the Opera House appears at:  http://en.wikipedia.org/wiki/Vienna_State_Opera.   Out of curiosity, I looked at the list of upcoming events, and, lo and behold, the Staatsballett was scheduled to perform that very evening a program of works choreographed by Balanchine and Robbins.   And what, you asked, was the program?  To my surprise and joy, the very first piece was scheduled to be Philip Glass’ Glass Pieces.  So I purchased a ticket and began to experience this grand building.  The lobbies and lounges are magnificent.  There are a myriad of coffee and champagne bars to wonder through, each with designs ranging from baroque to art deco to mid-century modern.  It was a treat just seeing these beautiful interiors.  I was seated in the top balcony and my seat was only slightly off the center of the row.  The almost circular auditorium is beautiful in red and gold.  The hall had been remodeled after the destruction of World War II and it retains that mid-century look.
The Vienna State Opera Orchestra, under the direction of Peter Ernst Larsen, began playing.  The actual Glass pieces played were Rubric, Facades, and excerpts from Akhnaten.    Glass is one of my favorite composers and it was thrilling to hear his music played by one of the world’s premiere orchestras and to see it performed by one of the world’s premiere ballet companies.  The choreography by Balanchine is also in a class by itself.  Hearing familiar music transposed to different instruments can lead to hearing the music “with new ears.”  I know Glass’ work as played by his ensemble, which tends to rely on amplified instruments.  His music was even more beautiful played by a traditional orchestra, although it did include an electronic keyboard.  The orchestral version softens the music’s hard edges and allows its complexity and melody to be highlighted.  The choreography is typical Balanchine- it uses the dance to represent the music much like fountains that are synchronized to music.  The Vienna dancers were wonderful.  Rubric had a wonderful group of soloists including Masayu Kimoto who had some of the longest arm extensions I have ever seen.  Balanchine’s choreography is kinetic and sometimes the dancers would lose their line, which is easy to see from the balcony.  The excerpts from Akhnaten, driven as they are by two drums, were sizzling.  The orchestra’s percussionists were a treat to watch; there arms movements were large and flexible.  The entire performance was top-flight.
The second piece was “In the Night” choreographed by Jerome Robbins. The beautiful nocturnes of Chopin were played on the solo piano by Igor Zapravdin.  This was an elegant ballet performed by three pairs of dancers.  All were technically grand and beautiful to watch.
The third piece was Stravinsky’s Violin Concerto.   The soloist was none other than Rainer Honeck, brother of Pittsburgh Symphony Music Director Manfred Honeck.  Rainer is concertmaster of the Vienna Philharmonic and also a noted soloist.  His performance here seemed to be note perfect.  At times, the orchestra seemed to overwhelm him, but I suspect that is the conductor’s fault.  Again Balanchine’s choreography provided a visual representation of the music through constantly moving dancers.  One of the dancers fell but was so quick to regain his footing that he did not miss a beat.
The final piece, again choreographed by Balanchine was Theme and Variation, based on Tchaikovsky’s Orchestral Suite No. 3.  Of note, the costumes were designed by Christian Lacroix.  Tchaikovsky’s beautiful music was made even more wonderful by the rich and elegant playing of the Staatsoper Orchestra.  The dancers performed skillfully, but again lines were a problem.  There was one corps member who seemed chronically to a fraction of a beat behind her compatriots, thus causing her frequently to be slightly in the wrong place, which can play havoc with ensemble.
This was a wonderful performance overall and I could not have enjoyed it more. 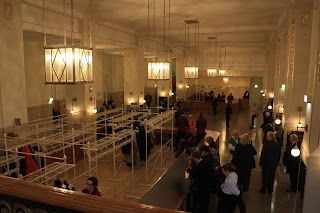 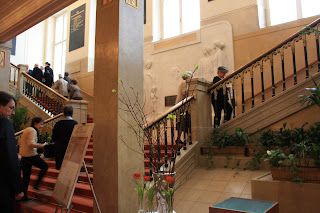 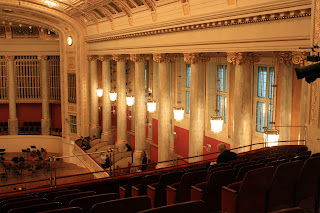 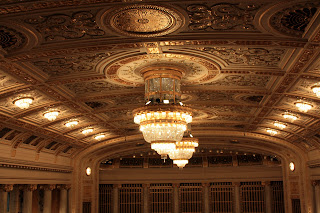 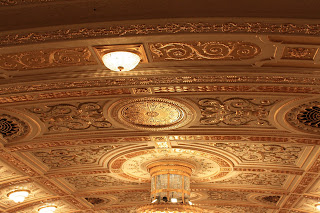 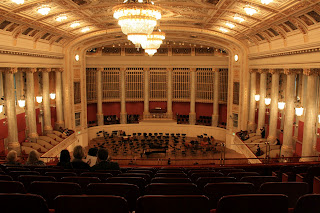 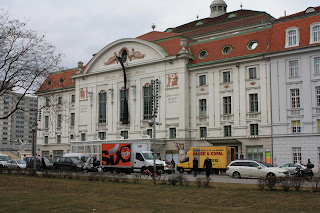