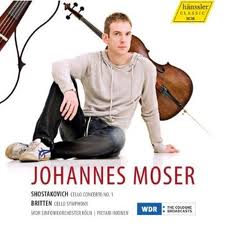 On February 16, 2012, the Atlanta Symphony orchestra, under the direction of Roberto Minczuk, presented a concert consisting of:
Wagner- Prelude to Act I of Die Meistersinger von Nurnberg
Elgar- Cello Concerto in E minor
Mozart- Symphony No. 35 in D major, K. 385 (“Haffner)
Strauss- Suite from Der Rosenkavalier, Op. 59
The solo cellist in the Elgar was Johannes Moser.
Maestro Minczuk’s biography says that he is a Grammy and Emmy Award-winning conductor who is music director of the Calgary Philharmonic and principal conductor of the Brazilian Symphony in Rio de Janeiro.   Like the bios of most of his contemporaries, Minczuk’s says he is “…firmly established as one of his generation’s brightest talents.”  Who writes this stuff?
The Wagner piece was a rousing way to begin the concert.  It is not too long and it provides a good taste of the master’s great orchestrations.  This can be treacherous music because of its thick orchestration.  Minczuk conducted without a score and it seemed that from time to time he let the brass overshadow the strings to a degree that the music became a blur.  The ASO strings could not be heard even where they are a very important part of the music.
After the Wagner, there was a brief video that featured cellist Johannes Moser.  This was a very touching and emotional presentation.  It began with Moser narrating how a casket bearing the body of a soldier was removed from his airplane as it arrived in Atlanta.  It appeared as though Moser captured it on camera from inside the aircraft.  He noted the solemn ceremony that accompanied this most sorrowful of events.  Moser drew a parallel to the sadness that Elgar felt after the “War to end all wars” during the time he wrote the cello concerto.  Moser’s was a powerful presentation and a great lead in to the profound emotion and sadness in Elgar’s music.
Elgar’s piece is beautiful, allowing the cello to express his dismay about conditions after World War I.  It is in four movements, with the first two played and last two played without interruption. This is very sad and introspective music that does not suffer from the lack of editing that I feel was apparent after hearing the ASO’srecent performance of Elgar’s First symphony.   Minczuk conducted from the score and   Moser’s playing was nothing short of incredible.  He has a large tone that never deteriorates into edginess.  He can be aggressive when needed, and subtle where required.  His strong playing is a reminder why he is a highly regarded soloist and others should best remain in the cello section of a great orchestra.  Moser and Minczuk seemed to be in agreement about the music and there seemed only to be seamlessness between the cello solos and the orchestral passages.  Per Atlanta tradition, there was a standing ovation with many curtain calls for Moser and Minczuk.  In this instance, the SO was appropriate and well deserved.  Moser returned the love by playing one portion of Bach’s Suites for Unaccompanied Cello.  The music was elegant and requires absolute control over the bow.  Moser played grand fortes and hushed pianissimos and his use of the bow was stunning.  Particularly notable were the very piano staccatos written by Bach.  Moser’s performance was faultless.  By the way, here is Moser’s Wikipedia entry: “Johannes Moser (born 1979) is a German-Canadian cellist who has performed with many of the world's leading orchestras.”  Now that’s modesty.
After the intermission, the Mozart symphony was performed.  This of-heard performed piece was ably led by Minzcuk, without benefit of a score, and played impeccably by the ASO.  The strings were particularly golden in the elegant second movement Andante and in the fourth movement Presto.
The Richard Strauss Suite is a blockbuster, featuring a large orchestra with enhanced percussion.   Its waltz sections are very familiar and seemed to resonate greatly for the ASO audience.  There is absolutely nothing wrong with schmaltz from time to time.  Minzcuk again conducted without a score and the ASO’s playing was first rate.  The twenty-five minute long piece lasted for what seemed just a few minutes.  It was a great performance.
There were several things of note in this program and performance.  I have already noted the grand playing of the ASO.  I have also noted Minczuk’s conducting three quarters of the pieces without benefit of the score.  As a result, page turning and attending to the written page did not have to come between him and the music making.  Minzcuk does not provide a strong beat with this right hand and he does not seem to use his left to control the orchestra’s playing, yet all of these pieces were interpreted and played wonderfully.  In fact, Minzcuk’s style of conducting looks like he is mimicking the music rather than leading it.  Nevertheless he was impressive.  It is also interesting that the ASO can respond very well to guest conductors.  Their tremendous playing under the leadership of Van Zweden and Remmereit were examples of this.  Certainly chemistry has something to do with it, as well as the talent of both the lead and the leader.
Finally, I note that the principal players of the symphony are frequently absent in the chamber-sized orchestra setting, and sometimes in concerti. It seems to happen more often at the ASO’s performances that with other orchestras.  I have no idea what that means!
at 1:14 PM