On February 2, 2.012, the Atlanta Symphony, under guest conductor Thomas Wilkins, presented a program that included:
Ravel:  Mother Goose Suite
Beethoven:  Con.certo No. 3 in C minor for Piano and orchestra, Opus 37
Dvorak: Symphony No. 8 in G major, Opus 88
The piano soloist in the Beethoven was Gabriela Montero.
Maestro Wilkins is the Music Director of the Omaha Symphony and the Principal Guest Conductor of the Hollywood Bowl. Last June I had the pleasure of hearing Wilkins and the Omaha Symphony Play in their magnificent home- the Holland Performing Arts Center.  The program included Vaughn Williams’ “Fantasia on a Theme of Thomas Tallis” andMahler’s Seventh Symphony. The Tallis Fantasia was wonderful.  The acoustics at the Holland warm and reverberant, yet the string quartet could be heard separately from the entire string orchestra, and placed exactly in the acoustic space, even from the balcony, where I sat.  Vaughn Williams favored the darker strings, i.e., the celli and violas, in this work and the Holland treated them with respect.  The Mahler benefited similarly.  In my review at the time, I made a few comments about Maestro Wilkins and they remain true, given last evening’s performance.  I have included my earlier comments along with photos of the Holland for reference.
The ASO concert began with the “Mother Goose Suite.”  This is gentle music perfectly suited to youngsters- it is gentle and lacks bombast.  The orchestra is pared down considerably, with the only brass being two French horns. The only principal playing from the full ASO that I could identify was violist Reid Harris.  There is something so atmospheric about this music that it is almost otherworldly.  It also may not be the best piece to begin a concert program.  The audience had not yet settled down and rid themselves of their coughing, so the background noise was at odds with the music’s delicacy.  Nevertheless, it is a wonderful piece.  The ASO musicians performed admirably, especially Associate Concertmaster William Pugh.
In the Beethoven, pianist Montero and Conductor Wilkins seemed to work together well.  The ASO was disciplined, and Wilkins paid great attention to Montero.  The Largo highlighted the skills of the ASO’s string section; they played cohesively and with silky smoothness.  Montero takes advantage of the full capabilities of her instrument.  From the tiniest pianissimo to the grand fortes she is in command.  Her left hand seemed particularly strong, but never overbearing.  The ASO audience, as it does every week, gave the performers a standing ovation.   Maestro Wilkins was quick to give recognition to the orchestra’s individual players before accepting the audience’s thanks on his own behalf.  After all the hubbub settled, Ms. Montero, who is known for her improvisational skills, requested that someone in the audience hum a tune that she could use as the basis for showcasing her prowess.  Well, no one took up the challenge to hum, and someone suggested she play “MacArthur Park.”  She seemed perplexed by the request, as did Wilkins.  I assume an old hippie made the request.  Anyway, someone finally shouted “Summertime,” which seemed to be more to Montero’s liking.  What followed was about 8 minutes of wonderful music making that included improvisations in the style of Rachmaninoff, Bach, and Rifkin.  There may have been others in the mix, but suffice it to say that at the end, the audience again went rapturous.
The final work was the Dvorak.  I have heard this work so many times throughout my listening career that it sometimes loses my interest.  In fact, the ASO programmed it just two years with Mei-Ann Chen as conductor.  Wilkins provided a much more disciplined piece.  His conducting style makes no doubt about the beat, with is right hand acting as a batoned-metronome.  His left is giving cues to the orchestra about entrances and dynamics.  The ASO again performed skillfully.  The woodwinds, including Christina Smith on flute and Laura Ardan on clarinet, were in top form.  The brass were also standouts.  This was a sunny performance that almost revived this warhorse for me.
As noted, Wilkins is firm in his beat.  I was surprised at how much he had to refer to the score in each piece.  At some point when he commits more to memory, he might attend even more to nuance.  This did not seem to impair his performance with the ASO, but I found it distracting when he occasionally flipped pages back and forth. He also seemed to use his baton as a bookmark at one point.  Mr. Wilkins is a tall and  elegant conductor who looked great in a well-tailored tux 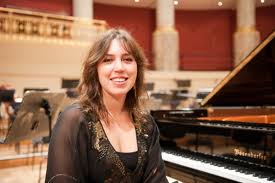 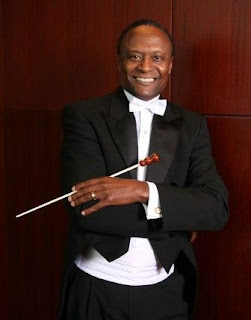 .
This was a very pleasant and well crafted concert.  It certainly was an opportunity to spotlight Ms. Montero’s skills and Maestro Wilkins’ orchestral control
at 2:51 PM